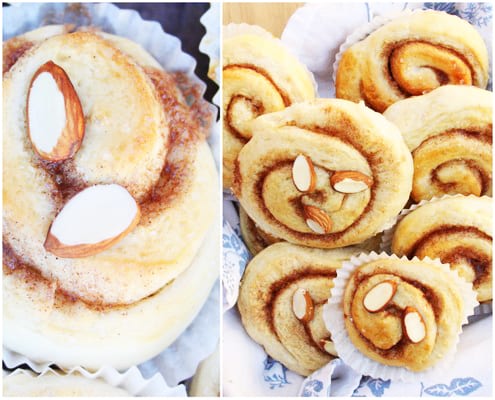 Even if you don’t have memories of a Swedish konditori, cinnamon buns have a nostalgic effect, and they make your whole house smell delicious.
By Kelsey Hilts

Behind every food and every meal there is a story, a memory, a connection.

“…When my father’s family bought my mother’s family’s four-level home, they leased out the basement level to a baker, and ran the konditori on street level. As a 6-year-old living with my grandparents {in Sweden}, I woke to the smells of lovely yeast breads…and during Lent, fresh semlor on our Tuesday morning breakfast table were baked downstairs while we slept. With the train station, secondary school, and hockey rink nearby, as well as a street of shops, the konditori attracted townsfolk for fresh baked goods including specialties like buttery weinerbröd, kanelbullar, and princesstårta… Here students from the high school and townspeople met for coffee and pastry…”

Our dear Swedish family friend recounts living as a 6-year-old with her grandparents in a small Swedish town. Her grandparents lived above the family-run konditori so she woke to the smell of Kanelbullar {Swedish Cinnamon Buns} and other pastries. Her stories ignite memories of my own as I remember the sweet, intoxicating smell of our house when my mom baked breads and cinnamon rolls.

Through my opportunity with Honest Cooking and the NORTH Nordic Food Festival in New York City, I became so overwhelmed by all of the inspiring Swedish foods. How to pick just one recipe when each dish has a story to tell? I initially made pytt i panna, drawn to the comfort food with the goal of cleaning out the fridge because that is a goal that I (and people all over the world) can relate to. But I couldn’t stop there. I was inspired by kanelbullar because similar to pytt i panna, it is an iconic Swedish food that many people seem to connect with. The cinnamon buns trigger nostalgia and memories. And as I remembered my mom’s cinnamon rolls, I wanted to compare them to the Swedish version.

The Swedish buns are not iced nor as sweet and gooey as the American counterpart. They make the perfect accompaniment for your cup of coffee or tea. Fika, the traditional Swedish coffee break, is still an active tradition in Sweden. If you are alone, at work or with family or friends, it is custom to take a moment with your coffee and cinnamon bun or other sweet. October 4th is Kanelbullens Dag {Cinnamon Bun Day}. Even if you are not Swedish, take the opportunity to pause from your hectic daily life, have a cup of tea or coffee, and enjoy a cinnamon roll.

The smell of warm, intoxicating cinnamon enveloped our kitchen and entire home the day that I made kanelbullar. My son opened the front door returning from preschool and at first smell, ran into the kitchen to find the buns. Maybe one day he will tell his kids and grandkids about the smell of his home when his mom was baking cinnamon buns.