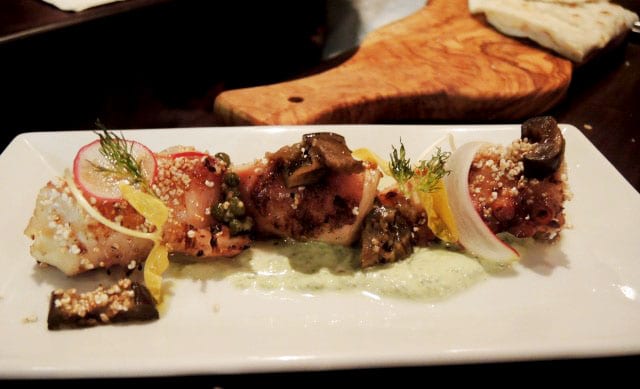 Mitch Weinstein checks out Mike Isabella’s new ode to Greece in DC and finds some of the most exciting food in the District.
By Mitch Weinstein

The Yelpers have, well…yelped. The “pro” reviews (are there any of those left?) will no doubt be in shortly. No one waits for a restaurant to get its sea legs any more, do they? Especially when a good chef opens what will undoubtedly be a hot spot – you gotta go. And go we did, Significant Eater and me, to Kapnos, chef/owner Mike Isabella’s new ode to Greece on 14th St. NW.

Of course, Mike didn’t open Kapnos by himself; George Pagonis is the chef de cuisine; Nicholas Pagonis is the GM; Taha Ismail is the beverage director of both Kapnos and Graffiato, another Isabella restaurant in the District. Maybe these guys are even partners – who knows? Another little point of interest before I get to the important stuff: everyone mentioned above falls not far from the Andrés’ family tree. They all get to wet their beak a little bit, if you know what I mean.

The first time I tasted Mike’s food was at Zaytinya, soon after Significant Eater got her job in DC – and we liked everything about the place. Well, guess what? On our first visit, we liked Kapnos even more.

For starters, the restaurant had only been open for 12 days, but everyone from the hostess to the bartenders to the waitstaff was on their game. That’s nice to see. And I did start at the bar, arriving early and grabbing one of the few empty seats…cocktails are fairly priced (for now) at $12, with extremely cutesy names like my Keebler Elf, a Plymouth gin/cointreau/Cocchi American concoction in an ouzo rinsed glass, that hit the spot on an extremely warm day.

Once at table, what’s better to start with than taramasolata, along with fresh from the oven flatbread? The tarama was nice and creamy, topped with a healthy dollop of caviar. That didn’t last long, as we were eager to dig into these earthy and tender stewed gigandes beans.

There’s a daily classic, and we couldn’t pass it up. Keftedes, fried zucchini fritters, showed off the kitchen’s frying technique, plain and simple. 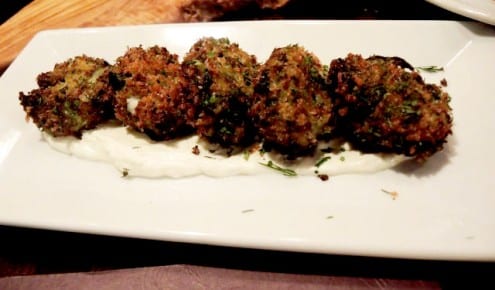 At one point, I think the table next to us was wondering how the two of us were eating all this food. But we’d only just begun, and even though we’re not huge octopus fans (too many blah octopus dishes over the years, I guess), we had to try Kapnos’ version. We weren’t disappointed, as this was probably the best we’d had in years, all smoky from the grill and served with “green harissa” and eggplant. 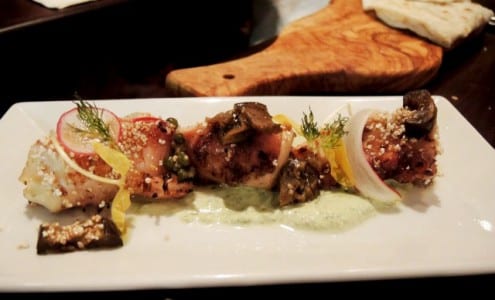 No stopping us now, especially once I saw Royal Red Shrimp (a sweet, tender, deepwater shrimp) on the menu. And expertly poached lobster, served over hilopites (an egg/milk pasta, cut into small squares) with mizithra (a fresh sheep’s cheese). Wanting and needing (really?) some meat, we finished our savories with the marinated spring lamb, spit-roasted and served over “ancient grains.” At first bite I thought the dish needed salt, but when all mixed up, it tasted just fine. The Chocolate Mousse cake with mastic ice cream, was a nice finish to this meal, the chocolate’s slight bitterness cut by the not too sweet ice cream. 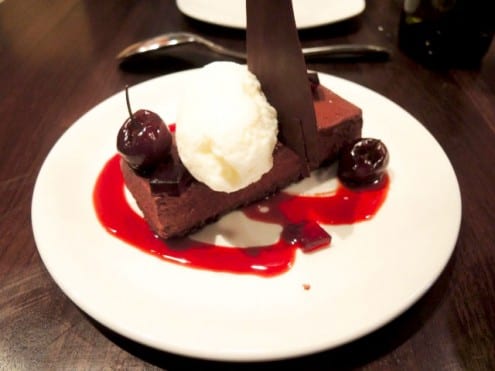 Yes, we ate too much. After all, it’s a brand new restaurant. Sig Eater and I don’t get to go out that often together in DC (she even waved to Isabella in the kitchen, which kinda made her night). And I have a feeling that the next time I’m down in the district, we’re going to be heading right back to Kapnos – there’s a lot more on this menu that we want to try. And if Mike’s not cooking the most exciting food in DC right now, I want to know – who is?