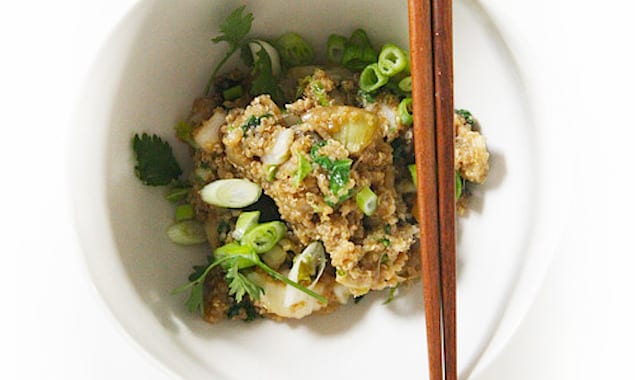 This is the kind of meal you make after a grueling day at work, a perfect recovery food- salty, fatty, lip-smacking delicious. The perfect balance of earthy eggplant and herbaceous bok choy served as the perfect foil to the salty combination of soy and miso.
By Mariela Alvarez Toro 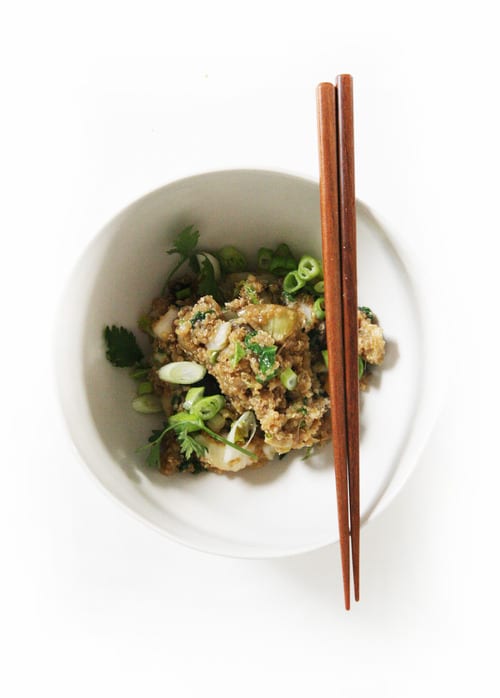 This is the kind of meal you make after a grueling day at work that turns into an even longer night of a few too many pre-dinner drinks to compensate the above stated stress. Whether overworked, over stressed, or hung-over, this is the perfect recovery food salty, fatty, lip smacking delicious, that also happens to be good for both your body and soul.

I have never been a late-night-Chinese-take-out food kinda gal, but several months back, I got home from a long day turned into night to an empty fridge, with nothing but leftover, quinoa, a bag of frozen peas, eggs, and soy sauce. Without much hesitation, or a plan mapped out, everything magically landed on the pan and came together beautifully in minutes, though as messy as I felt. Every single craving I might have been having was immediately satisfied, one bite at a time. Sweet peas popping one after the other coated in salty miso and soy, laced in velvety egg and spiked with spicy ginger. Delicious.

Because my immediate crush on this newly discovered recipe was not going naway, I decided to build on it and develop a recipe that was as delicious but slightly more complex. I wanted to explore the potential of using different vegetable combinations to achieve a layered flavor experience. Since the end of summer is upon us, eggplant was the vegetable of choice. To balance the eggplant’s creaminess I incorporated bok choy for crunch and freshness. The perfect balance of earthy eggplant and herbaceous bok choy served as the perfect foil to the salty combination of soy and miso.

This recipe is flexible, and you should feel empowered to work with whatever ingredients the season brings as long as that soy-miso-ginger to egg and quinoa balance remains intact. I can’t wait to try a version during fall with cauliflower and some sort of squash, or even carrots and sweet potatoes could be amazing, or during early spring a combination of wild leeks and peas. The key here being to keep it simple, while still experimenting with the flavor profiles and textures you like.

Print
Cook Time
35 mins
Total Time
35 mins
A recovery meal after a grueling day— salty, fatty, lip-smacking delicious. A perfect balance of earthy eggplant and bok choy to the salty soy and miso.
Author: Mariela Alvarez Toro
Recipe Type: Side, Main
Cuisine: Asian Inspired
Serves: 4
Ingredients
Instructions
To cook quinoa:
To make Fried Quinoa:
Notes
I like to cook the eggplant in a cast iron pan, to ensure crispy edges and deep roasted flavor. Nonetheless, if you do not have a cast iron, cook the eggplant in a regular pan with the onions.
3.2.1275