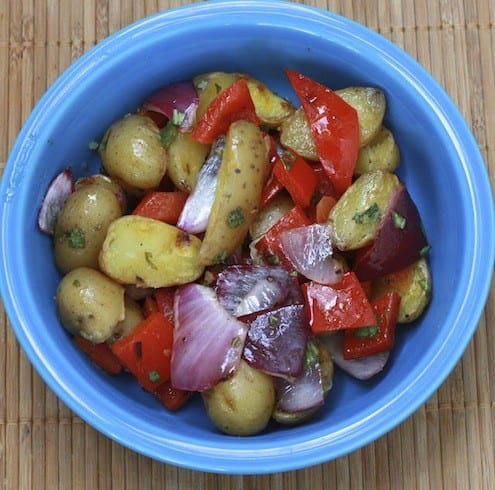 Every time I plan to get on an airplane, I’m forced with a choice: do I refrain from all liquids before and during the flight, resulting in dehydration, or do I come to terms with being “that girl” that gets up every hour to use the airplane restroom? More often than not, I do my best to secure an aisle seat, make those frequent trips to the restroom, and try not to think about how gross airplane bathrooms are.

This has absolutely nothing to do with this potato salad, except that I’m writing this while on a flight from Seattle to Chicago. One and a half hours down, two bathroom trips in, and two and a half hours to go. As you can see, I’ve been cursed with a miniature bladder.

Enough potty talk, and onto potato salad, eh? I saw this recipe in Cooking Light shortly after we’d enjoyed the Red Potatoes with Feta, Mint, and Olives, and was intrigued to find yet another mayo-less potato salad. This one had a completely different flavor profile—served warm with a lemony vinaigrette and the inclusion of peppers and onions—but, much like the other, was immediately added to my “summer BBQ” list. It was easy to prepare and quick to make, though I kept the vegetables on the grill much longer than the directions stated in an attempt to get those gorgeous grill marks they had in Cooking Light’s photos. We actually used an indoor grill (probably the reason for the lack of grill marks) because the outdoor grill was occupied with BBQ chicken and this worked perfectly.

Now excuse me while I go make another trip to the airplane restroom…I’ll leave you to make this potato salad and see for yourself how good it is!