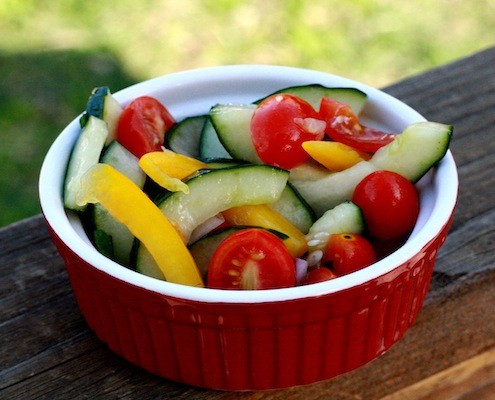 Put the word “Greek” in a recipe title and I am immediately drawn to it (case in point: Greek Panzanella). Funny, because I’m pretty sure if you’d asked me a few years ago what Greek food consisted of or what ingredients were in a Greek salad, you would have been met with a blank stare. Oh, how things have changed!

May’s issue of Cooking Light featured a few different cucumber side salads, with one of the variations being this Greek one. Since I had such good luck with my last Cooking Light side dish (I’m talking about you, favorite asparagus!), I had high hopes for this one. Cooking Light once again delivered and this was a great side dish at our Mother’s Day cookout. The recipe below probably serves about 4–I doubled and 7 of us finished it off…this is another easy recipe to adjust according to how many you want to serve. Because you can make it ahead of time (just refrigerate until serving!), it’s ideal to throw in a cooler and take on a picnic or to your neighbor’s pool party.

Next time, I might throw some chopped Kalamata olives and crumbled feta cheese in there. For me, my favorite part of the name “Greek” in a food title is the olives and the cheese! However, it’s perfectly good  as the vegetable-only version listed. You can also add chopped parsley as the original recipe did; I omitted because my mom isn’t particularly keen on the herb and it was Mother’s Day after all! Do use fresh oregano if you can–dried won’t give you quite the same flavor impact!

The Right Spirit For Father’s Day