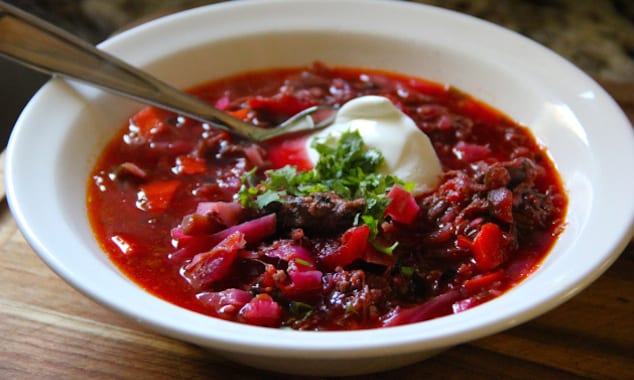 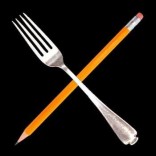 Yuliya Childers is a self-proclaimed cooking and writing addict born…

How to Make Chia Seed Pudding

Discover the history of borscht soup and the secret to making the perfect pot.
By Yuliya Childers

If there is one item that puts Ukrainian cookery on the map of International Yum, that would be borscht.  I would love to tell you that there are poems and songs written about it, borscht cook-offs and Borschtfests are held around the world, but, sadly, I can’t report any of this; apparently the rest of the world has not caught on about the magical properties of Ukrainian classic gastronomy.  I can, however, tell you that there are numerous anecdotes and jokes about borsch making, borscht eating, and various family drama situations involving borscht somehow. Russian and Ukrainian literature has no shortage of borscht mentions. For example, there is a poetic episode in Bulgakov’s cult novel Master And Margarita, where a corrupt soviet bureaucrat gets arrested in his apartment right before he has a chance to dig into a bowl of “fire breathing borscht” with a knuckle bone nestling amidst its thickness.

Another famous borscht scene is featured in a soviet cult classic The Golden Calf by Ilf and Petrov. In this scene a certain husband is being informed by his wife that she is leaving him for another. He decides to go on hunger strike to get her back, and even temporarily succeeds in his endeavor, that is until he is busted sneaking borscht straight from the pot at night. He greedily consumes the borscht, stomping his foot with eagerness and anticipation, producing whistling and slurping noises in his nose, and smacking his lips; finally, he digs into the cold borscht with his bare hand and unearths a large chunk of meat, upon which his wife makes her presence known and he drops the meat back into the soup, producing a “small fountain of cabbage and carrot stars“. Hilarious!

Note that even though Bulgakov and Ilf & Petrov duo are all Russian writers, all of them have Ukrainian roots, as well as Russian classic Nicolai Gogol, whose works are peppered with borscht-isms.  So you see, borscht found its way to fame by way of classic literature.

First and foremost, let me explain what borscht is.  Borscht  is the ancient slavic word for beetroot. Borscht, therefore, is a very hearty soup involving several varieties of vegetables (and meat for us non-vegetarians), that must have beetroot in it.  Conversely, a soup without beetroot cannot be called borscht, no matter what they tell you.  In Russian and Ukrainian cultures, borscht is the epitome of home cooking, the ultimate comfort food, the symbol of everything hearty, homey, superbly delicious and rich.  Borscht has as many recipes as there are cooks, and whether meaty or vegetarian, it reigns supreme over any other soup known to the civilized world (according to me).

There are several basic methods of cooking borscht, of which my favorite is first cooking meat properly seasoned, yielding rich broth, and then dealing with vegetables separately and in a gentle and healthful way, connecting the meat and vegetables in the end.  As I mentioned before, beetroot is a must. Second mandatory ingredient is green cabbage, and third — tomato paste or chopped tomatoes, which lend borscht their tartness and bright red tint.  What you do beyond that, is your own choice.  Major difference between Ukrainian and Russian borscht is the omission of potatoes and salt pork in the latter.

Below is a brief overview of some of the most important borscht components.

Meat choices. I’ve had borscht made of beef, lamb, duck, goose, and chicken.  I never had borscht made of pork, but that doesn’t mean it can’t be done. Meat must have some bones and fat in it, for best flavor. Fat could be skimmed off if you are afraid of it, after the broth is done.

Root Vegetables. Any root vegetable is going to work. Beets, as was mentioned before, are a must, and they have to be red beets. Beyond that, carrots, parsnips, turnips, celeriac, rutabagas, etc. will all work beautifully. All root vegetables must be cut in as uniform way as possible. Julienne is the best way to cut them (think thin french fries). Refer to pictures for thickness and length.

A Light Carrot and Coconut Soup

Other Vegetables. Green cabbage is a must. Best kind is the winter cabbage, which is harder, has stiffer leaves and is crunchy. For potatoes, I use Yukon Golds or Idaho, the yellow varieties. Baking potatoes such as Russet won’t work, and red potatoes will do quite well, but they tend to take longer to cook, so keep that in mind.  I personally like bell peppers in my borscht. Their flavor is unmistakable and they are very fragrant. Green and red varieties are best. Celery stalks are great if you can’t get a hold of Chinese celery (leafy kind).

Tomatoes. Tomato paste is the most convenient and consistent in flavor, so that’s the easy way.  Canned or fresh diced tomatoes with juice will work nicely, yielding somewhat thinner coloring and more subtle flavor, which may or may not need adjustment in the end.

5.0 from 3 reviews
A Borscht for Borscht Lovers'

Print
Discover the history of borscht soup and the secret to making the perfect pot.
Author: Yuliya Childers
Recipe Type: Main, Side
Serves: Yields a very large stock pot full, which will be enough to feed a small village
Ingredients
Vegetables:
Instructions
Method (Vegetarians can skip over to step 9 and use vegetable stock or water):
3.2.1275 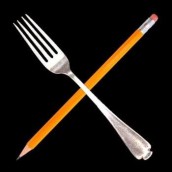 Yuliya Childers is a self-proclaimed cooking and writing addict born and raised in a cosmopolitan city of Odessa on the Black Sea coast. She started cooking at quite an early age and learned most of her skills by watching others and reading cook books. Made-from-scratch naturally grown food is her passion. Yuliya believes that truly good food either creates or invokes memories. Her blog Eat Already! is focused on everyday creative yet un-pretentious cooking that anyone with basic skill can replicate. Yuliya's recipes are usually accompanied by childhood memories or family stories related to the dish in some way. Her recipes are honest, eclectic, multi-cultural, imaginative, and often outside the box. Currently she's into artisan breads, traditional cooking, and everything fermented… Yuliya is cooking and writing about it from Alabama.

National Sandwich Day: An Ode to the Glorious Sandwich

How to Make Chia Seed Pudding