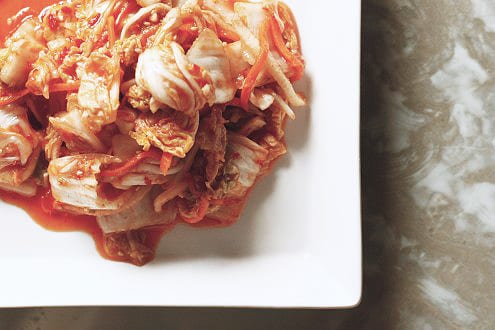 Come winter, families across Korea make enough kimchi to last the upcoming year. Grandmothers use recipes that have been in the family for decades, and often all the relatives will pitch in to get the job done.
By Jacqui Gabel

Those of us who love kimchi and live in Korea are spoiled. We have access to the real stuff, the stuff that forms addictions and lifelong obsessions with Korean food.

I lived in Seoul for over a year before I attempted to make kimchi, and when I did, I was back in Minneapolis visiting family and friends. After a couple of weeks at home, I woke up one ordinary day with an aggressive, unadulterated itch, and nothing but a plain bowl of incendiary, pungent, fermented cabbage would do. I hightailed it to the nearest Korean market for a fix, but it wasn’t at all the same. I realized right then that I’d better learn to make kimchi from scratch while I could. It was Easter, and we ate ham, scalloped potatoes, and spicy quick-pickled cucumber kimchi.

Come winter, families across Korea make enough kimchi to last the upcoming year. Grandmothers use recipes that have been in the family for decades, and often all the relatives will pitch in to get the job done. The event is called kimjang, and it usually takes an entire weekend. Three years ago my friend Hae Rae, her husband Sae Jin, and Sae Jin’s family went through three hundred cabbages during kimjang, and each family went home with about 120 kilograms. It was the last time her mother-in-law let the family help. Every year since then, at her children’s insistence, she has agreed to set a date for the event only to show up at their doorsteps a few days before with containers of kimchi she’s just made, like a regular kimchi fairy.

Hye Rae is my kimchi fairy, and for that, I am very lucky. She’s been gifting me with her mother-in-law’s kimchi for nearly as long as we’ve known one other. And somehow she always knows when my supply is running low without ever needing to ask.

She keeps eight containers of different kimchi in a separate fridge, like the icebox my grandmother had in her basement to store frozen foods. Sometimes she runs out of baechu kimchi, or kimchi made with cabbage, so she’ll make a batch of it herself. The recipe here is a slight adaptation of Hye Rae’s version, but with the customary elements intact. My kimchi will never taste just like hers or her mother-in-law’s, and that’s part of the charm. I have years of practice ahead of me. For now at least, I’ve got a place to start. Make this and you’ll have the fundamental component for so many Korean dishes. That is, if you can keep from eating it straight away first.

Print
Prep Time
1 hour
Total Time
1 hour
A basic, traditional recipe for spicy, tangy cabbage kimchi
Author: Jacqui Gabel
Recipe Type: Side
Serves: 4
Ingredients
Instructions
Notes
Kimchi is incredibly forgiving so long as it has enough sugar and salt. Hye Rae swears by myeolchijeot, a kind of jeotgal, or fish sauce, made from anchovies, and though she wouldn’t imagine making baechu kimchi without it, she did give me permission to tell you it’s optional. In my opinion, jeotgal gives kimchi its quintessential freshness, a briny zing that smacks of the sea. Many kimchi recipes use saeujeot instead, which is another kind of jeotgal made with tiny shrimp. Any kind of jeotgal is okay. Just be sure to taste it first to gauge its saltiness, then adjust the amount of coarse salt you use accordingly.
3.2.1230