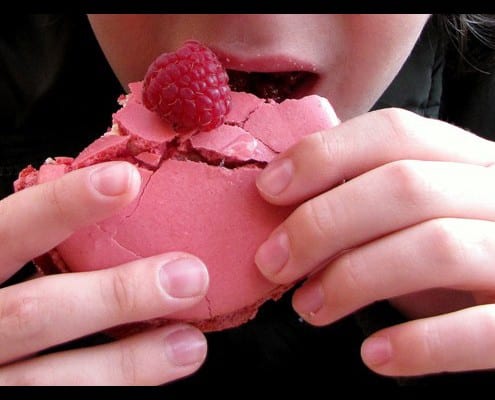 A trip to the Pierre Herme store in Paris is an essential part of becoming a miniature gourmet.
By Suzie Castello

During a trip with my kids to Paris recently, I saw my chance to reach their inner foodies. My kids are not adventurous enough, yet, to be introduced to the wonders of Alain Ducasse or Guy Savoy.  At ages ten and eleven, they are picky like any kids, and aren’t ready to make the leap of faith of dinner at an haute cuisine establishment.  But, on this trip I did find a key to unlock the gourmet within: macarons – especially those of Pierre Herme.  They are little bundles of advanced culinary thinking delivered in a pretty, sugary package.

We first tried the macarons at the Pierre Herme counter at the Galleries Lafayette. They are displayed like Bulgari watches with tiny signage in French indicating their flavors. My daughter had found especially beautiful a macaron with sparkling white shells. The attendant steered her away from choosing the white truffle and walnut macaron, saying in English “That one is mushroom.”  My daughter instantly made a face and chose the pink one perfumed with roses.  I could’ve killed that woman. Thankfully my son was too distracted by the jewelry store treatment given the macarons and had not heard the attendant’s poor salesmanship. Sitting down with our choices, I said to him, “Here, taste the white, sparkly one.” My son’s face contorted with happiness, his sister’s showed only shock. “And this one.”  A moan of delight betrayed the party in his mouth.  Should I tell him it was foie gras with figs?

After a few trips to Pierre Herme store on Rue Bonaparte, where we received better service, he’d tried several desserts and a variety of macaron flavors.  His favorite macaron: a tie between the madarin orange with olive oil and the grapefruit.  My daughter didn’t stray from the rose macarons, but did try the Infinement Vanille and the Ispahan,  big adventures for her! They both declared a visit to Pierre Herme an essential for anyone going to Paris.

Strolling away from the shop, their inner gourmets awakened, the fountain in front of the church of Saint Sulpice took on a whole new dimension.  Isn’t that what eating well is about?