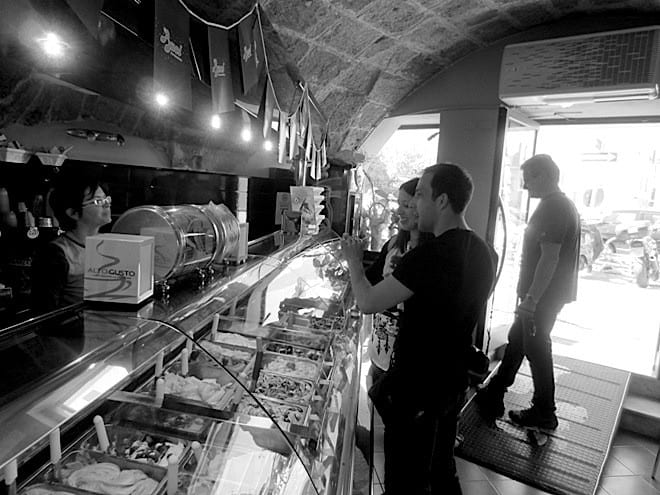 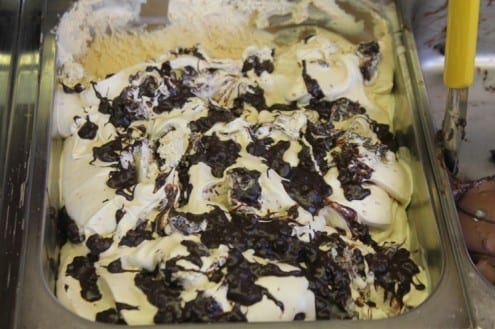 I head to Alghero, an old Spanish town on the North-West side of Sardinia, with two objectives: 1) to find that amazing gelateria that I tried once, but which I don’t remember the name, 2) to check out Ciro, a place recommended by several friends, but that I must have missed the last time I was here. 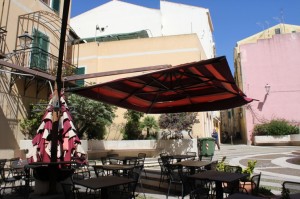 Although seriously focused on my goal, while strolling around the alleys of this charming ex fortress, I get distracted by several other temptations.
“Le Caramelle dei Pirati”, with its barrels overflowing with spaghetti candies and salted liquorices, steals my attention for a while. When I manage to get out, another distraction comes on my way.
From the stand “L’Isola del Torrone”, a local vendor hands me pieces of almond nougats and spoons of torrone spread rolled in hazelnut crumbs. 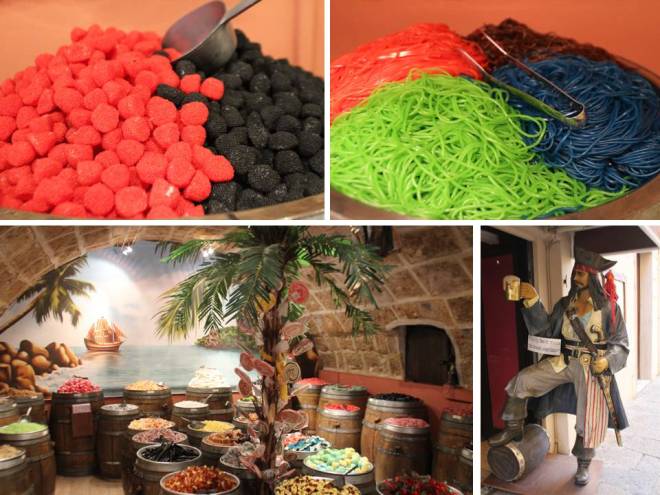 Delicious. I continue moving, trying to skip the luscious lures, when eventually I find my place. “Here it is!”, I scream excited walking towards the window. You can imagine my excitement when I read the sign and realize “my” gelateria is actually Ciro! I cannot help but commend myself: “I have such a great taste!”.

In the middle of the long, well presented display the flavors that represent the Island, “Mirto” and “Seadas”, stand out. The first one, a particular kind of wild berry, used to season white meat or as a base for liquor, gives gelato an interesting wood flavor. The other one is the icy reproduction of Seadas, a kind of Sardinian sweet ravioli filled with sheep cheese, fried and covered with honey.

“Can I have a sample? I ask the girl behind the display who’s already smiling at my confusion. “Sure!” she replies, stretching out a spoonful of purple ice cream. I still haven’t finished savoring that first bite when another sample is ready. “Noci e Fichi. You’ll like this”. As I try this walnut gelato, intertwined with a jam of caramelized figs, I immediately order a cup, matching my choice with a scoop of Kinder Merendero, a meringue base enriched with a white chocolate sauce and covered with crunchy cereals. 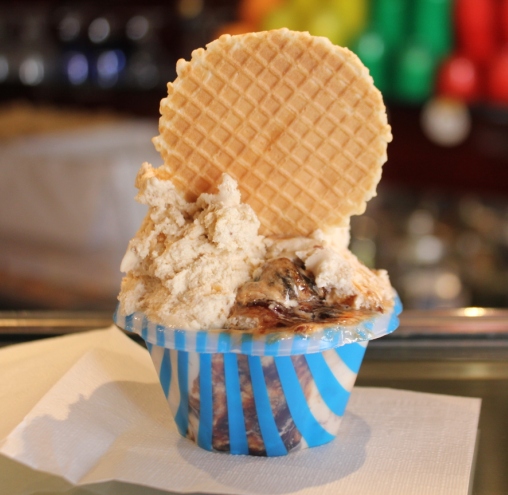 While relishing on my gelato, Anna, from the opposite side of the display, tells me her story. Whereas in the afternoon she takes care of her shop, in the morning Anna works as a teacher at Ittiri, a small town in the north of the island.
“When I lived in Turin, I worked for many years as an attendant at Lingotto (one of the biggest Italian arenas) and consequently, I was present at a lot of exhibitions and fairs about food.
I took this opportunity to take classes and learn how to make gelato”, Anna continues. “Then, after moving to Sardinia, seven years ago, my husband and I opened “Ciro”, whose traditional Neapolitan name is meant to celebrate Naples, my hometown.” Since then, she has opened other four gelaterias in the city: “Paradiso“, “Micky Mouse” and “Peccati di Gola“. 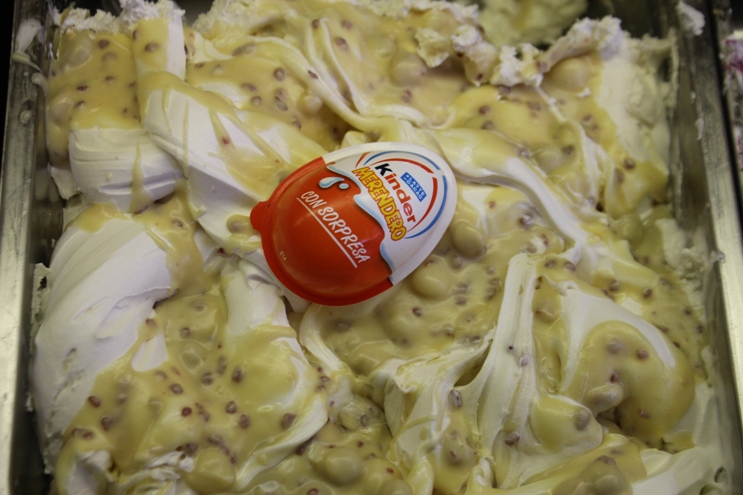 While listening to this story, my cup empties. “Come here”, Anna says with a spoon of “Nutella“. “This is one of my favorite”. As I taste it, I can understand why: a rich Fiordilatte cream loaded with hazelnut-chocolate swirls that add a luscious consistency to the milky base. 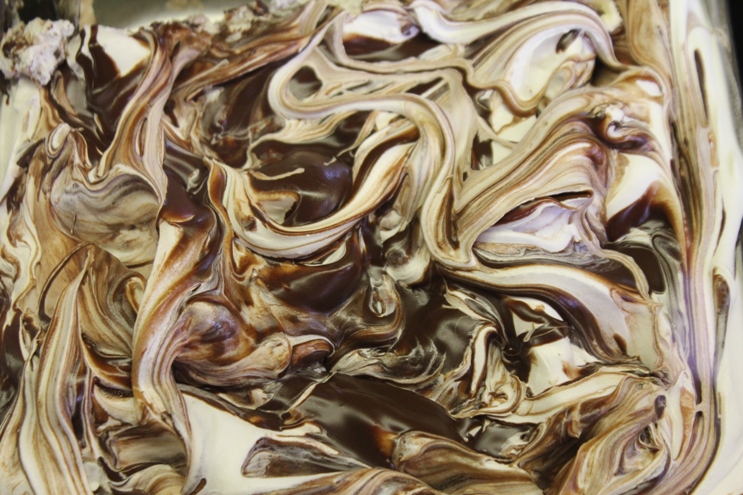 At Ciro, the maternal instinct of the teacher Anna is reflected on her feelings towards gelato, that for her is “like a second son, not just a hobby, but a great passion”. And one can actually feel this affection through the attention she dedicates to her creations, through the carefulness that leads her to pick up fruit in the summer, make jams and store them in jars, creating a reserve for the colder months.

“In order to succeed – Anna Explains -, you have to have lots of creativity, you have to give your customers what your competitors can’t offer, and never give up trying, even when your results don’t match your expectations”.

“Kit Kat” and “Apriti Sesamo” reflect this creative intention. The first one is an authentic reproduction of the bar, with bits of wafer inside that add a nice crunch. The second, named after the command “open sesame”, is a sesame ice cream like none of the ones I had before. The base is almost unsweetened and recalls the flavor of Tahini sauce, enlivened by the luscious crunchy chocolate that tops it. 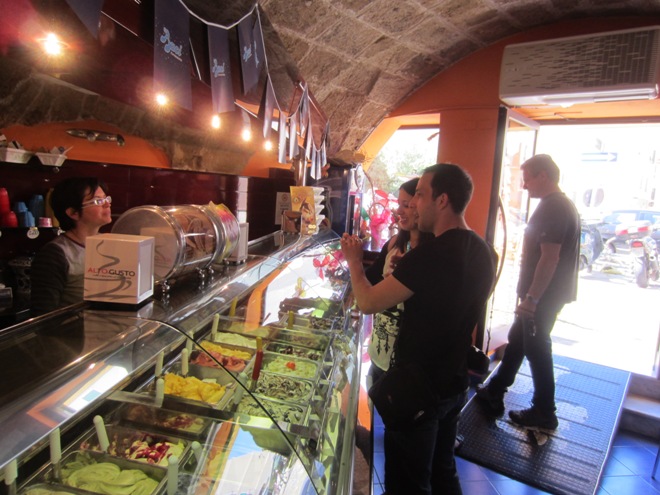 Before I leave I slowly indulge over one last sample of “Sesamo”… I think it’s safe to say that next time I’m in Alghero, I won’t forget the name, “Ciro!”
“Gelateria Ciro”, Piazza Ginnasio 4, Alghero (SS) Sardinia – Italy