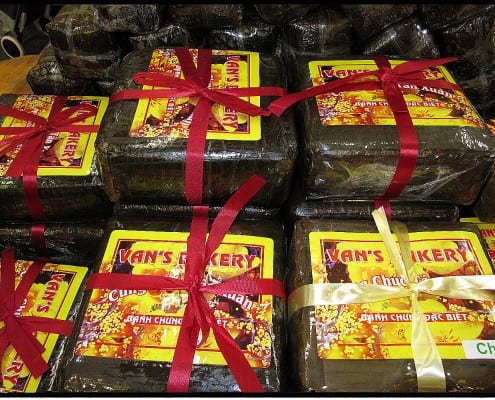 Cauliflower Soup from a Vermont Kitchen

How has a humble rice cake with three simple ingredients (rice, mung bean, and pork) come to symbolize Tet, the most celebrated of Vietnamese holidays?
By Priscilla Willis 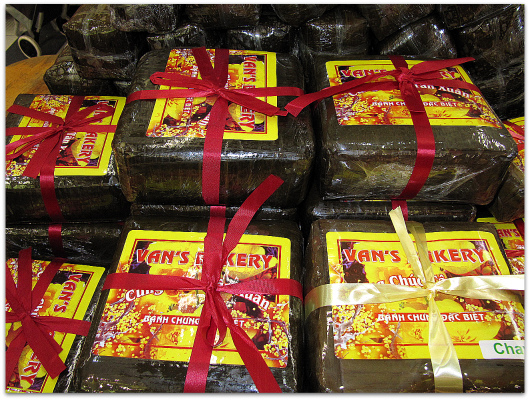 The gift of Banh Chung during the New Year has become the most important tradition of Vietnamese culture and was passed down from one generation to the next. Always curious about the foods that play such an important role in cultural traditions, I attended a cooking demonstration by Chef Haley Nguyen of Xanh Bistro in Fountain Valley, CA and learned about the legend behind Banh Chung, how the rice cakes are made and how it became a symbol of Tet.

Preparations for Chinese New Year, also known as Lunar New Year and Spring Festival, and welcoming the Year of the Dragon on January 23rd, have been underway for weeks in Asian households around the world. Although the Lunar New Year is observed in all of East Asia influenced by Chinese civilization, each country celebrates it in a way unique to that country. For the Vietnamese and Chinese people, 2012 is the Year of the Dragon (it doesn’t always coincide with the Chinese animal). Being born in the Year of the Dragon is considered most desirable, especially for boys, as the Dragon has been the  symbol of royalty for thousands of years and is believed to bring luck, strength, royalty, wisdom, and a promising future.

Last year, my friend Monique and I met at the ABC Supermarket shopping center at Bolsa and Brookhurst in what’s known as Little Saigon in Westminster. I wanted to photograph and learn about the many symbols and customs associated with Tet and Monique acted as my translator and tour guide.

Only 10:30 a.m. and traffic was backed up on Brookhurst and the parking lot was swarming with erratic drivers looking for a spot. I parked way in the back.

Flowers are an important part of decorating a home for Chinese New Year. Plum blossom and water narcissus are the two flowers most associated with the New Year.

In the midst of the crush of shoppers and staccato sounds of a foreign language, were two monks walking, eyes cast downward, moving silently amongst the crowd carrying a bamboo container tucked under their robes, discreetly revealed only when a passer-by offers a few dollars.

Tangerines, oranges and pomelos are frequently displayed in homes and stores. Tangerines are symbolic of good luck and oranges are symbolic of wealth. The first store we entered had a tangerine tree decorated with lai-see envelopes (also called hong-bao). Money is placed inside the red envelopes and given to children and young adults as gifts.

Traditional gifts given to families are rice cakes called banh chung made from white rice, marinated strips of pork and yellow mung beans. I had wanted to photograph Monique making a traditional New Years food but she said that everyone buys these in stores now because they are too labor intensive to make at home. I read a very touching article by Ky-Phong Tran in the Orange County Register recalling memories of his grandfather making the rice cakes every New Year – the only thing he ever made and how this tradition was his father’s way of reaching back 35 years and 8,000 miles to his childhood in the homeland.

Piled high were colorful containers of candies and nuts that are given as gifts also.

From here we went to the fruit market where Monique identified the exotic fruits for me and described their taste and how they’re eaten. There was dragon fruit, an exotic lemon that looks like it has “fingers”, gigantic jack fruit whose seeds are boiled and taste like chestnuts, prickly durian that’s called “stinky fruit” and has a custardy filling. I bought a package of mangostine which are cracked open and has white fruit segments similar to an orange.

Monique purchased some traditional Vietnamese desserts, made from rice and similar to what we know as tapioca or rice pudding, and bought plum blossoms for her home from a familiar vendor with a better price than the ones we priced earlier.

More commotion erupted when the police and zoning people arrived and vendors were told that they couldn’t be spilling over into the fire lane and some were sent packing because they had no sellers license.

The week ahead brings the parades and pageantry of Tet Festival followed by 10 days of celebrating the Year of the Dragon with family and friends.