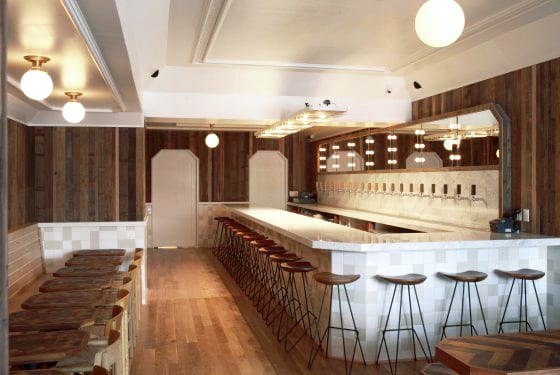 Tørst is a recently opened beer-bar in Greenpoint, Brooklyn. Being the brainchild of Danish master brewer Jeppe Jarnit-Bjergsø, of Evil Twin fame, and chef Daniel Burns, formerly of super restaurant NOMA, this is by far one of the best places to go for a beer in NYC.

When you enter Tørst, you are immediately greeted by a wonderfully cool decor mixing simple wood finishes with an insanely good looking marble bar unit. Upon gazing on the twenty or so taps encapsulated in the marble work, you immediately get a sense of beer luxury. The list features around fifty different beers from all around the world, a lot of them, of course, being Evil Twin.

If you’re ever in Brooklyn and you have even a remote interest in the world of beer, Tørst is a must go.

PS. In the weeks to come, chef Daniel Burns will open his newest venture within the confines of Tørst, namely his new restaurant Luksus (Danish for luxury). A sure fire slam-dunk. Honest Cooking will be back with a review of Luksus in the months to come.