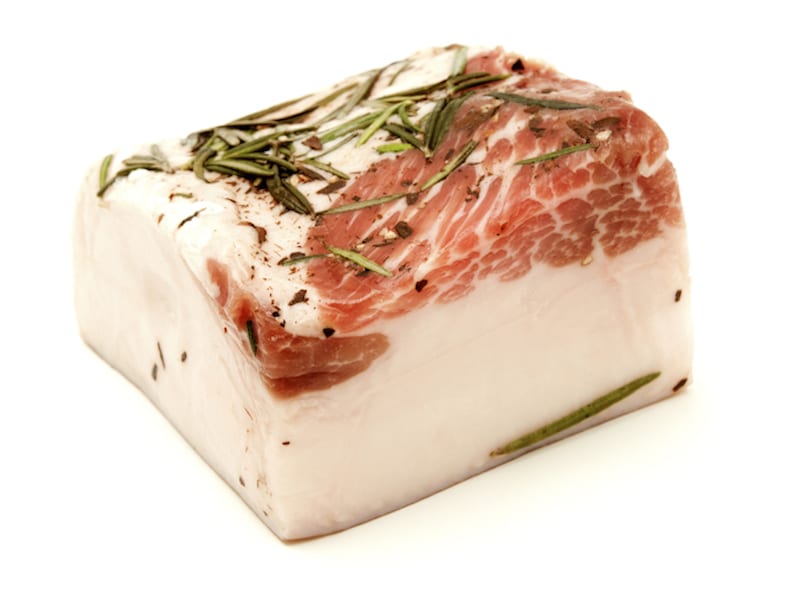 Italian Lardo, or Lardo d’Arnad, is the epitome of high-end Italian cured meats that can either be rendered for cooking, or served as an antipasto.

Italian Lardo, or as it’s known in English, “fatback” or just plain lard, is one of those ingredients that you often see on some Italian recipes, but may be harder to find than you originally imagined. A bunch of questions probably went through your head: “Can I just use bacon? Where can I find this?” etc. Word to the wise, never skip on the Lardo. The aroma and flavor you get from rendering the Lardo is incredible. Due to the curing process, the Lardo gets infused with the flavors of the brine that was used, along with preserving flavors and sealing up juices.

The Lardo is cut from the shoulder of the pig, with most of the fat left on. The Lardo is then cut into chunks and placed in special boxes made out of chestnut wood called “doils.” Then the brine is added. The brine can contain any number of herbs or spices including rosemary, cinnamon, juniper, nutmeg, or sage. The two most popular styles are Lardo d’Arnad from the Vallée d’Aoste region of Italy, and Lardo di Colonnata from Tuscany. The whole package is then sealed away for a minimum of 3 months. The result is a aromatic, white-pink cured meat that, when sliced thin, can be served as a delicious antipasto, or diced and rendered out into a clear cooking liquid with a distinct and herbaceous aroma.

When buying Lardo, always look for clean, creamy-white fat and pinkish meat with no veins. You may see some remnants of the brine on top, such as peppercorns, rosemary leaves, etc. That’s perfectly okay. It let’s you know what kind of flavor and aroma your pack of Lardo will have. Be sure to keep your Lardo, after you open the package, well wrapped and in the fridge.

Eleonora Baldwin has a simple recipe using Lardo as a main ingredient. While not really doing anything to it, beyond letting it melt a little before you eat, it let’s the full flavor shine through!

You can usually find Lardo in speciality stores, or online at websites like Buon Italia. Enjoy!