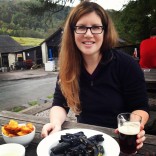 Maggie Cubbler is a beer-and-food-loving Yankee living in North Yorkshire,…

This goulash is a little creamier than a typical Czech goulash would be – it’s more along the lines of a Hungarian goulash. But that’s ok – it tastes great!
By Maggie Cubbler

Despite the fact that I ate a ton of goulash in Prague, I decided to make more because–well–I was actually craving it again and I wanted to share with you some of the deliciousness I had while there. Of course I picked one of those most famous beers to make this with–Pilsner Urquell–not only because it’s Czech and it’s awesome, but because the mild and fresh flavor profile of the beer really helps boost the flavors along without overpowering anything. I’d stick to Pilsner Urquell or a similarly grainy, malty, low-bitterness pils like Budvar or even Victory Prima Pils. I hope you like it!

4.0 from 1 reviews
Goulash with Bacon Dumplings

Print
Prep Time
20 mins
Cook Time
1 hour 30 mins
Total Time
1 hour 50 mins
This goulash is a little creamier than a typical Czech goulash would be - it's more along the lines of a Hungarian goulash. But that's ok - it tastes great!
Author: Maggie Cubbler
Recipe Type: Main
Serves: 2
Ingredients
For the goulash:
For the dumplings:
Instructions
To make the goulash:
To make the dumplings:
2.2.6 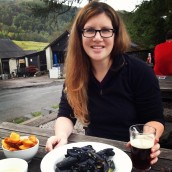 Maggie Cubbler is a beer-and-food-loving Yankee living in North Yorkshire, England. When she's not pulling pints at a traditional Yorkshire pub, she devotes her time to her Labrador, husband, and working on her blog: Loaded Kitchen. She loves to pair beer with food, cook with beer, and drink a (half) pint or two with the natives. Besides blogging and drinking, Maggie is currently studying to become a certified Cicerone while trying to figure out why Yorkshire men like lime cordial syrup in their lagers. Take a swing by her blog and check out the party in her pans.