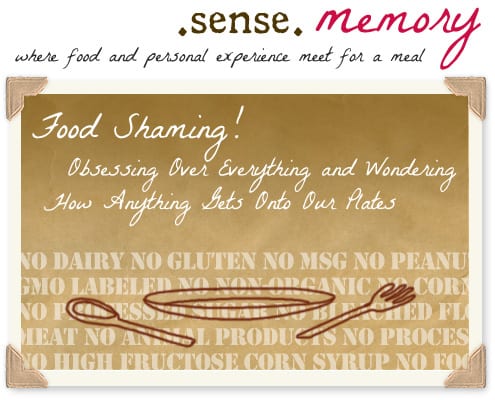 Food Shaming happens when we become too self-involved with what’s on our plates, that meals must reflect a personal manifesto and as a result, we lose sight of the fact that there’s a much bigger picture to be seen over the role food has in lives outside our own.
By Denise Sakaki

I took the time to peruse the organic produce section, mindfully selecting the as-close-to-locally-harvested items versus things barged-in from Peru. I passed anything that looked too carb-y with bleached flour or anything glutinous in general, instead going for that big bag of quinoa. I even skipped the meat and seafood section, to make sure I wasn’t tempted to skip on the commitment to cutting back on animal consumption as a whole. I take my painstakingly-curated grocery basket to the checkout and lay my life out on display to compare with other’s aisle-gatherings and I can’t help but stare at the bags of potato chips, crates of soda, buy-three-get-one-free candy bars, and (gasp) plain white bread and iceberg lettuce as the only perishable items on another person’s weekly food haul. The Horror. By the time my order is rung up, the only thing the check-out gal neglects to add to my flimsy but eco-friendly reuseable shopping bag is the big dose of Silent Food Shaming I just laid down in the grocery store. Oooooh… BURN!

Food Shaming. We’re all guilty of it. And even I’m giving myself way more food snob credit than I deserve because my grocery habits run more along the lines of two bottles of inexpensive (but local) wines in return for one package of tofu. Call it nutritional collective bargaining. And while we get a regular delivery of organic produce from our community-supported agriculture subscription, I buy non-organic produce if it’s cheaper or to hell with buying seasonal, I just need that pint of strawberries in February for Valentine’s Day. But I’ll still catch myself furrowing my brow at a person’s grocery cart full of nothing but corn chips, frozen burritos and Coors Light at ten in the morning. Shame on me! Who am I to judge one’s penchant for beer and burritos? Perhaps my Food Shaming is just latent Food Envy – I indulged in some Doritos recently and it gave me an incredibly illicit nacho-cheese thrill, like I had just committed the Crime of the Century and gotten away with it. Or maybe that was just the sodium high.  Guilt and snobbery regularly orbit the world of food and we probably food-shame ourselves worse than anyone else; how we buy food and what we choose on a menu has become a task of navigating a field of political landmines. However, looking into America’s general eating habits was a reminder that not everyone knows (or cares) what a sous vide machine is, being able to taste the difference between grass-fed vs. grass-finished beef doesn’t make you a better person, and sometimes it’s enough to just do what we can in making mindful eating decisions – nobody’s a food saint. Even author, chef, and TV personality Anthony Bourdain admits to an unholy love of KFC macaroni and cheese.

Meals are generously sprinkled with value-judgment, most notably the belief that something from-scratch is inherently better than a restaurant meal, that a family’s worth is measured in whether or not they cook and eat their meals together, no pre-packaged, frozen-dinner shortcuts. It seems an impossible ideal, but the reality is pleasantly somewhere in between. A study conducted by the anti-hunger organization Share Our Strength in 2012 found that 78% of families will have home-cooked meals five or more nights a week, a laudable majority. The study found that the home cooked meals are a mix of from-scratch dishes, combined with packaged foods like boxed pasta or flavored rice.  It’s not slow-cooked recipes handed down from the Old Country, laid out in artfully-placed rustic dishes for a family-style dinner, it’s more like a mad circus act of juggling time and schedules, but American families are eating meals from their own kitchens. And it’s not to fulfill a Norman Rockwell fantasy — a survey done by the American Institute for Cancer Research in 2010 showed that 40% of Americans were cooking at home because it was simply more economical. I talk to friends ready to have their first child, and they have starry-eyed, lofty goals of jarring organic, handmade baby food and a promise that their child will never know what a drive-thru window is. And then I see friends who have been parents for a few years, or on their second or third child, and how when the kid just wants to eat dry cereal for breakfast, lunch and dinner, it’s not the end of the world. The notion of a family meal is a highly romanticized one, and terribly daunting, so if you have to bust out the box of mac n’ cheese to go with that humble but delicious homemade meatloaf, get down with your bad self and just Craigslist that baby food-maker kit that never got used, no one’s gonna judge.

A chef friend made a comment recently, wondering why anyone would pay for a simple meal of steak with vegetables, to which my response was that I knew several people, much like Sex and the City’s Carrie Bradshaw, who use their oven as storage, possibly keeping sweaters in there. I’m sure that inconvenient truth puts a Food Shame-worthy cringe on many faces, which leads to the next question: when did it become bad form to admit you just don’t like to cook? A poll taken by Harris Interactive in 2010 revealed that while most adults enjoy cooking, one in five people admit to not liking it, or they just don’t bother with it. Should these people be shunned and chased out like Frankenstein’s Monster with torches and pitchforks? Or is it a reminder that for many, cooking feels like a chore, but that doesn’t mean they don’t enjoy a well-prepared meal, even if it is as simple as steak and potatoes. They just don’t want to cook it. I did an unofficial poll, casually asking friends who regularly go out to eat what they order. Their dining selections aren’t so exotic to where they couldn’t make these at home – hamburgers, enchiladas, pasta – but the defining factor is always time, and the lack of it to spend in a crowded grocery store during evening rush hour and dirtying up the kitchen to make a meal, especially if they’re only cooking for themselves. Dinner for one is not particularly motivating and most recipes aren’t designed for single-servings. Being surrounded by a food-obsessed culture of artisanal ingredients, stylish eating trends and cookbooks that only compound the guilt that you’re not making those photogenic dishes, I can understand just throwing one’s hands up in the air and getting a burger and fries to go. Don’t forget the milkshake.

There will never be a lack of pressure to eat mindfully, and it’s still good advice to follow more often than not, but another equally bit of good advice is to not be so hard on oneself or others. It doesn’t make someone bad if they don’t eat only locally-sourced organic food and you don’t need to unfriend someone who isn’t fully-educated on the talking points of the GMO debate. The simple truth is everyone has to eat, regardless of how initiated they wish to be on the finer points of preparation and ingredients, and there are often separate factors of finance and time that outweigh gourmand tendencies. If there is a desire to educate others over mindful eating practices, it’s not going to be through a disdainful look. Food Shaming happens when we become too self-involved with what’s on our plates, that meals must reflect a personal manifesto and as a result, we lose sight of the fact that there’s a much bigger picture to be seen over the role food has in lives outside our own. A simple, but favorite line from writer Nora Ephron, says it best in regards to not overthinking things:  “There’s no point in making piecrust from scratch.” Because, really… it’s pie. What’s to complain about when there’s pie?