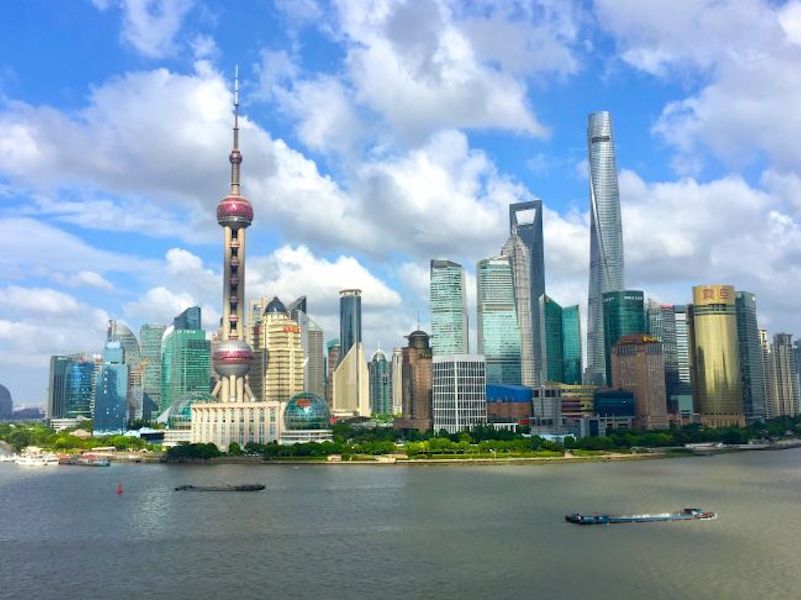 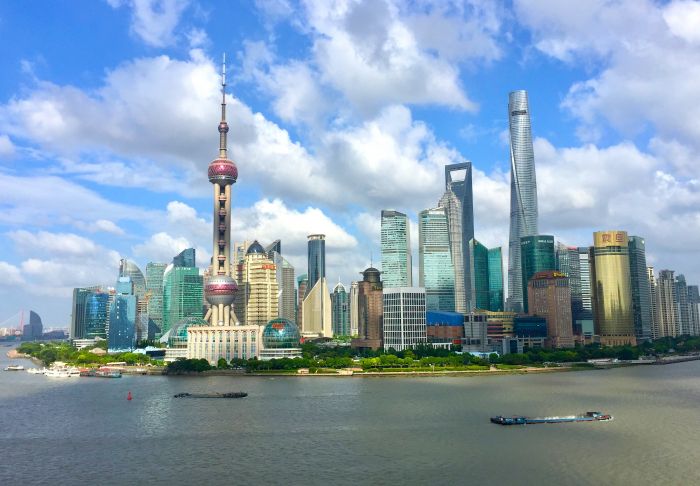 China is a captivating country, harmoniously blending ancient culture with modern wonders. It’s mind-boggling that you can walk the city streets of Beijing, Xi’an and Shanghai, glittering under a landscape of neon signs reflected on towering glass and steel buildings, and then, just one block over, you’re magically thousands of years in the past, surrounded by burning incense, the soft chants of morning prayers, and mouthwatering smells emanating from old, metal noodle pots bubbling away at the night market.

But China can be a nightmare to navigate on your own, which is why I chose to join Viking’s Roof of the World (ROTW) cruisetour. Their 16-day adventure, consisting of 10 nights in luxury hotels and a 6-day Yangtze River cruise, covers all China’s sightseeing “biggies”. However, the real clincher for me was three nights in exotic and mystical Lhasa, Tibet, all impeccably organized in typical Viking high style. 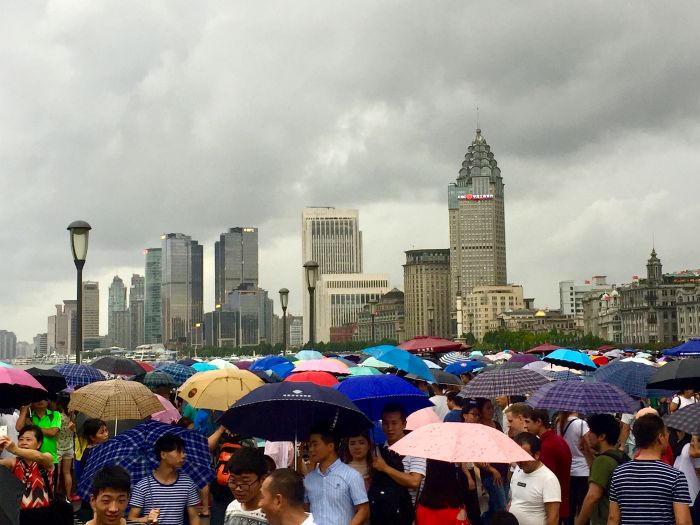 The number of people living in China is simply astounding. At 3.7 million square miles (about the same size as the U.S.), it’s the fourth largest country in the world, filled with 1.3 billion people, making it the world’s most populated nation. Shanghai, China’s biggest and richest city, has almost 25 million people living there. The capital city of Beijing is continually expanding their transport systems even though they already have the world’s largest airport and the busiest subway system. In Xi’an, join the body-bumping crowds to view 8,000 life-sized Terracotta Warriors interred for more than 2,000 years, or for a walk along the 3,750-mile-long Great Wall of China.

Viking can also boast some pretty amazing numbers on their ROTW cruisetour. The 17 days are comprised of 18 guided excursions which include five UNESCO World Heritage Sites, stopping at five ports while cruising the Yangtze, plus four additional cities by land (where you’ll be staying in 5-star luxury hotels) with 24/7 service provided by your guide. We scored the best leader, John Liu, who has worked as a professional guide for almost 30 years. He spoke perfect English, was refreshingly honest with his answers regarding the political climate and problematic issues that China now faces, had incredible knowledge on everything China related, and was unbelievably patient and helpful. 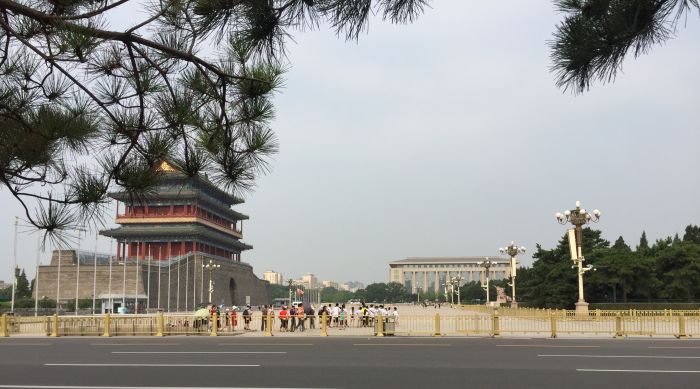 Tip: I purposely arrived in Beijing early so I could sign up for a Lost Plate food adventure, the best and tastiest way to explore the real Beijing. The food was delicious, and our tour guide, Ruixi, was full of historical, cultural and edible tidbits. We traveled by tuk-tuk down twisty hutongs (narrow alleys) to some seriously, off-the-beaten-track spots. We jumped off at a family’s home to sample their famous noodles, the only item on the menu, whose name translates to Master True Hot Dry Noodles. Other stops included a D.I.Y. Mongolian barbecue and an outdoor eatery where we concocted our own version of Chinese burritos from freshly-made, wafer-thin pancakes. Endless local beer was included as well as China’s famous (and highly potent) Baijiu alcohol.

The next morning (after hiding the bathroom scale), I took full advantage of the Regent Hotel’s humongous buffet breakfast, which included everything from dim sum to duck.

Even though it was my third time visiting Tiananmen Square and the Forbidden City, the largest ancient palace in the world, listening to Liu’s stories about the 24 Chinese emperors who had lived there, made it all come alive. We couldn’t visit all 9,999 rooms, but I did search out the Gate of Heavenly Peace where the Emperors kept their concubines.

Although I didn’t think I’d be able to stay awake for the evening show, I was actually mesmerized by The Legend of Kung Fu, which proved to be an exciting, Broadway-caliber stage production featuring China’s finest Kung Fu practitioners. 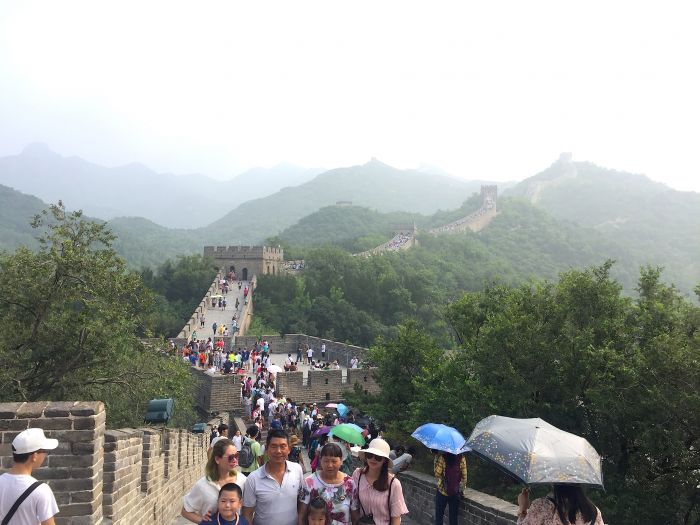 What can I say about the Great Wall that hasn’t already been said? Snaking endlessly (well, not quite, but at least for somewhere between 3,000 and 13,000 miles, depending on the source) around the countryside, we went to the most popular climbing spot, the Badaling Hills, where we could choose between the easier or steeper route.

For sheer fun, you can’t beat our rickshaw ride careening through the hutongs in the old residential neighborhoods where the locals still live much as they have for centuries. We stopped to visit a family of artists, including one young lady who was renown for her intricate inside-out snuff bottle painting, before heading over to see the enormous bell at Bell and Drum Square. 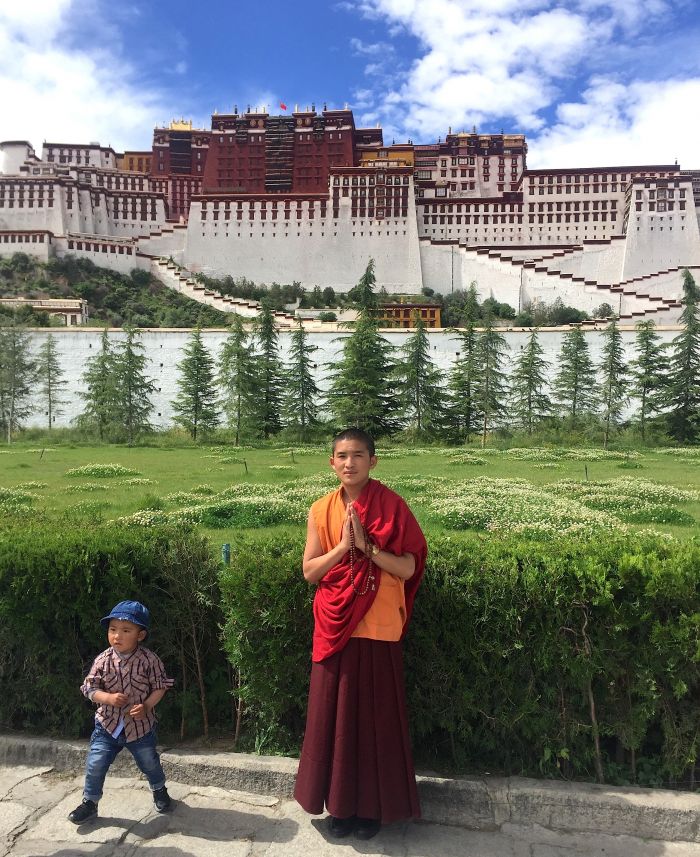 Xi’an, once one of the richest cities in the world and the capital of China for twelve dynasties, is now a nondescript, smoggy industrial city. However, it houses one of the world’s most famous archaeological finds, the subterranean 8,000 life-sized Terracotta Warriors, exquisitely sculpted with no two faces alike, buried with China’s First Emperor, Qin Shi Huang Di. Almost as astonishing is a pair of bronze chariots and horses unearthed just 65 feet west of the tomb.

Tip: Another not-to-be missed find is the massage spot recommended to me by the helpful concierge, located just half a block from our Shangri-la Hotel. The fabulous, hour-long foot massage, conducted in a private room with my choice of music, tea, and fresh fruit plate, miraculously cost only $7. I highly recommend my girl, who goes by the name of #15. 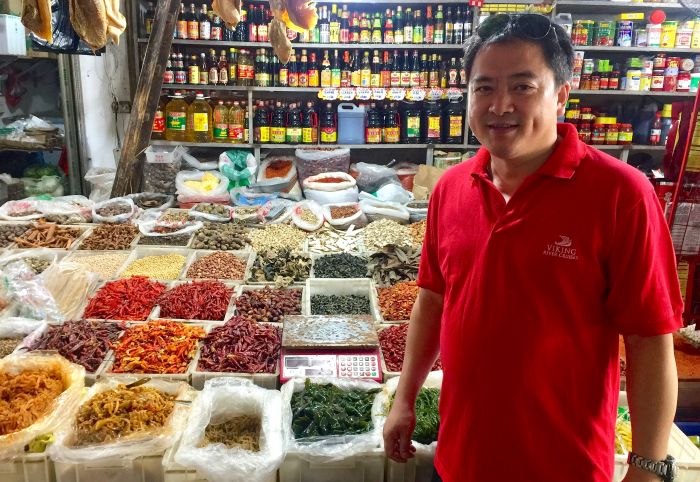 Lhasa, the spiritual heart of Tibet, was almost unrecognizable since my last visit 20 years ago. Where there was once just a small town surrounding the Potala Palace, modern Lhasa now has miles of sprawling suburbs. But the Tibetan old town quarter, with its religious sites and flourishing market area, is still a photographer’s dream spot.

The 1,300-year-old, golden-roofed Jokhang Temple, a sacred pilgrimage site, remains unchanged. It’s filled with the distinct aroma of burning yak butter and the murmurs of Buddhist prayers by the traditionally-dressed Tibetans as they do their kora, a devotional clockwise circumambulation around the temple while spinning prayer wheels or making full-body prostrations. You’re bound to get lost in the Barkhor Market that surrounds the temple, but it’s not a problem. The labyrinth of alleyways is jam-packed with small shops selling everything from monk clothing, yak butter cheese, Tibetan instruments and hand-painted thankas, to the best priced (if you’re good at bargaining) jewelry and souvenirs. 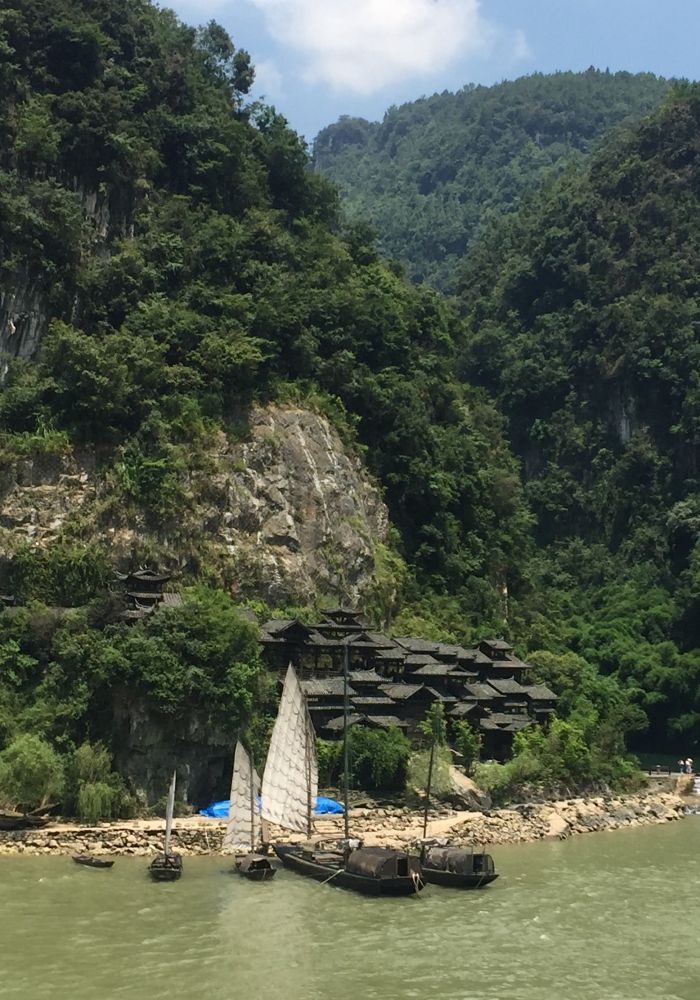 The iconic Potala Palace, the former residence of the Dalai Lama, is a myriad of spiraling staircases, gold-filled tombs, vast prayer halls, and opulent rooms filled with painted frescos, Buddha statues, and priceless antiques.
The food in Lhasa is a unique blend of Tibetan, Chinese and Indian flavors. My favorite meal was found, albeit not easily, by climbing some rickety stairs hidden in a courtyard behind a jewelry store, to the back of the Tibetan Family Kitchen, which serves the best momos (Tibetan dumplings) in town.
Tip: When your Viking guide tells you to take it very easy the first day, listen. Lhasa is 12,000 feet high and many people succumb to altitude sickness. I didn’t listen and the next day I was one sick puppy. While the rest of my group enjoyed traditional tea in a family home and visited the Sera Monastery to watch the red-robed monks take part in lively, hand-slapping debates, I spent the day in the medical room at our hotel

Sailing down the Yangtze Cruise on The Viking Emerald

We boarded in Chongqing, which I thought would be some little village on the water’s edge but it turned out to be one of the world’s biggest port cities that no one has ever heard of. I was a little disappointed when I saw the plain-Jane exterior of our boat, the 256-passenger Emerald, which is charted by Viking. However, upon boarding the boat, when we were greeted by a prancing red Chinese Dragon, chilled tea and cool wet cloths, I let out a sigh of relief as I saw all the familiar Viking touches: sophisticated floral arrangements, a dramatic glass lobby, a roomy sundeck with plenty of shady spots, an internet café, a library, a coffee tea and pastry counter, copious L’Occitane bath products and bright spacious staterooms. The Emerald also had a fitness room, a beauty salon, a tea boutique, a handicraft shop, and an exceedingly popular tailor shop where two days after your order, you’ll have a stunning, custom-made silk jacket or cheongsam (fitted dress).

The next few days provided a peaceful break from our action-packed city tours. Pleasant afternoons were spent on the upper deck, sipping a glass of wine while sailing down the Yangtze, gazing at the ever-changing landscape including one particularly breathtaking passage lined with craggy, limestone ridges known as the Three Gorges.

Activities included climbing to the top of the Shibaozhai Temple, a spectacular 12-story, 18th-century temple built high on a cliff overlooking the river, and boarding sampan boats for a narrated ride through the picturesque Goddess Stream.

In Wuhan, at the Hubei Provincial Museum, we were treated to a musical bell performance before viewing relics unearthed from a 2000-year-old tomb, including the original chime bells, the heaviest musical instrument in the world, weighing in at 5,525 pounds.

On board there was a full roster of entertainment choices ranging from educational lectures on Chinese culture and Buddhism, to mahjong lessons, dumpling-making and brush painting demos, dance performances, a rollicking talent show put on by the staff, and afternoon high-teas.

Since the food on board was some of the best I’ve ever enjoyed on a Viking cruise (not surprisingly, since there were outstanding Chinese dishes offered at each meal), I jumped at the chance to join the talented Chef Danny Tang on a morning market tour, where we sampled soup dumplings, fresh lotus seeds, and shopped for fresh veggies and spices.

Well rested after our cruise, I was ready to explore sophisticated Shanghai, although it was hard to leave our glamorous, Art-Deco hotel, The Fairmont Peace Hotel, which overlooked the Bund, their elegant riverside promenade. We visited the prestigious Yuyuan Garden, built during the Ming Dynasty, walked through the rapidly disappearing Old Shanghai quarter, and wandered through the Shanghai Museum filled with ancient ceramics and bronzes. Our last night was spent in sheer amazement watching incredible feats of strength and flexibility performed by the phenomenal Shanghai Acrobatic Troupe.