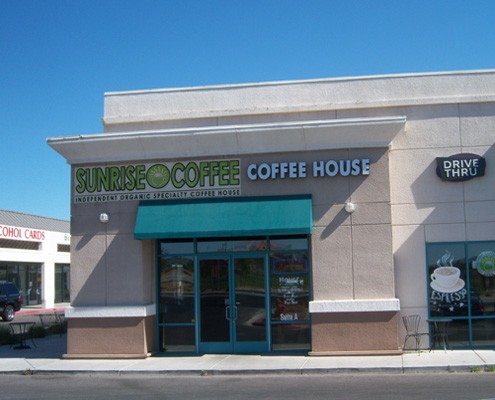 Even if coffee isn’t exactly what made Sin City famous, Sunrise Coffee Co turns out to be a reason to leave the Strip for an hour or two.
By Bill Walsh

Las Vegas has a reputation for a lot of things but one of them has not been coffee. As a town that seems to live off of travelers, local places did not seem to take as easily as in other towns. This boded poorly for the prospect of good coffee, as the average coffee drinker is still satisfied with sub-par coffee that the big chains ever so happily pump out.

But in this coffee desert, I managed to find a distant oasis near the airport. I caught wind that Sunrise Coffee happened to serve Klatch Coffee, a superb coffee roaster from San Dimas, and the first chance I found, I made my way over.

I found Sunrise on the corner of a small strip mall in what seemed like a part of town that is just recently developing. Save for a tacky collection of paper back novels, the shop interior held a chic look with a slate wall, lots of interesting art and a overtly pleasing aesthetic.

The coffee was indeed Klatch, with a full rotation of their coffee as well as two espresso blends on hand. I had an espresso of the World’s Best Espresso (voted so at the 2007 World Barista Championship) and a drip of their Rainforest Blend (according to the Klatch website, a medium roast of american coffees). The drip I had a mixed experience with, as my first cup was really stale and thus I asked that when they brewed a fresh pot, if I could have some of that instead, to which they ever so apologetically agreed. Thus my second, much fresher cup of the Rainforest Blend held notes of toffee, pepper, oregano and buttermilk amidst a medium body that didn’t win me over yet proved decent (I’ve never had the blend before but it tasted a bit darker then a medium roast).

The espresso on the other hand was a juggernaut-in-a-cup that garnered my vote to its worldly superiority. The shots were pulled painstakingly well with a marbled crema, all conveying notes of sweet pound cake, white chocolate, a bit of ginger, vanilla and orange; overall, there was a nice bitter/sour balance amidst a staunch sweetness that made the cup shimmer.

The tea was free leaf (they offered bee pollen for your tea too, a sight I have never seen).

Aside from the stale coffee I was first served, I found myself happier than a man winning a hard million off his last quarter. If you make it into Vegas, take a detour from the strip to hit Sunrise Coffee.