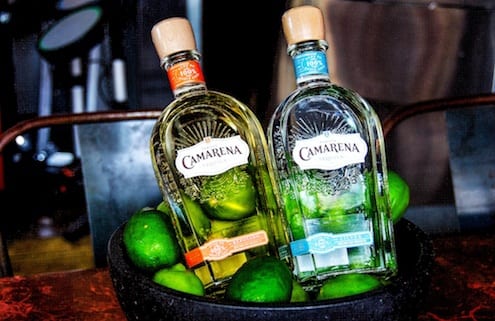 Brenda Benoit and a group of people got together at El Vato Tequila & Tacos Bar in Miami to pair delicious food with Camarena Tequila cocktails.
By Brenda Benoit

Mauricio Camarena – a tequila producer and spokesperson for the family-owned company that has been making tequila for six generations, welcomed us with a gentle smile. Tequila runs in his veins and is part of a family tradition that connects land, blue agave and the love for his grandfather, who taught him the complex process of collecting, preparing and distilling the blue agave in order to make their unique tequilas.

The tequilas came in two variations, the Silver and the Reposado. The Silver Tequila was clear in color and the taste reminiscent of sweet vanilla, black pepper and green herbs. The Reposado, which means “rested” in Spanish was sweeter with a golden hue. It is called rested because it remains in oak barrels for 60 days before processing. The tequilas were enjoyed both straight (best at room temperature) or mixed in cocktails.

These cocktails paired perfectly with the food. We had tacos with various fillings (meat, fish, shrimp) and desserts like Flan de Coco and Mexican Strawberry and Apple Pie, served “taco style”.

What makes Familia Camarena Tequila distinctive is that the agave is grown in the highlands in Los Altos Highlands of Jalisco at an elevation of nearly 8,000 feet. Blue agave is a plant that thrives mostly at lower altitudes in fertile and sandy soils and while many people think of agave as being a member of the cactus family, it is not; it is actually more closely related to lilies. Growing agave at higher altitudes and a milder climate in rich red earth gives the final product a full, fruity and slightly herbal flavor.

Familia Camarena Tequila is made with 100% blue agave (also known as Agave tequilana, agave azul or tequila agave) and uses a hands-on method of production. The agave is harvested by hand and no chemicals are used in the process. Bottling and labeling are also done by hand making each bottle of Camarena Tequila a little work of art.