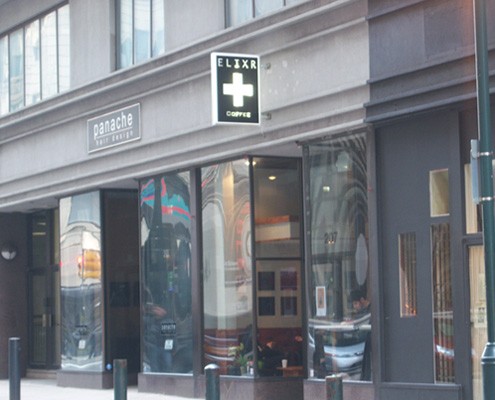 Bill Walsh is happy to see that a great coffeehouse has taken the place of a former, not-so-great one.
By Bill Walsh

I always find it pleasing when a great coffeehouse takes the place of a former, lackluster establishment. Hausbrandt once had a Philly coffeehouse that ran a decent leg, but after a while it fizzled. Following its closure, the former shell on 15th street remained abandoned.

Enter the phoenix of Elixr Coffee. Having just opened up in January (by a partnership that includes an Eagles offensive lineman), this outfit moved in strong, distributing PT’s Coffee out of Kansas and taking their coffee quite seriously.

I made my way over one leisurely afternoon to sample their wares. The interior is very homey, with a nice arrangement of furniture (with a lot of bar seating) and a tv playing barista championships while customers sip and work. I ordered a cup of the Finca El Molino, El Salvador via drip and an espresso (the coffee used for my shots was not named). The drip produced a light-bodied, honey-filled cup with some wheat, cherry, jasmine, almond cookie and sassafras (delicious). The espresso, pulled short with a marbled crema, sang of spicy cocoa, a prominent saltiness, lemon candy, whiskey, cookie dough and syrupy mouth feel (also quite good). The tea I did not note.

Elixr was medicine that Philly needed. If you happen to be in the neighborhood, pop in.

Coffee-Loaded Cocktails for the Weekend and International Coffee Day

Cool Ways to Chill Out with Iced Coffee this Summer