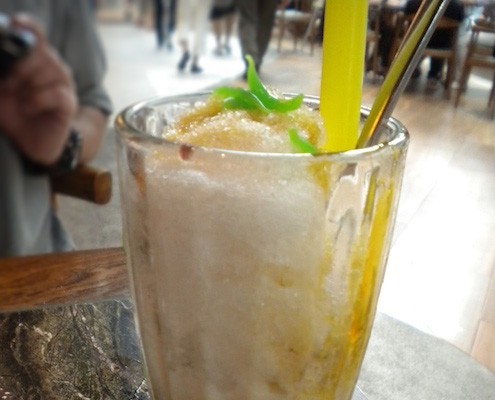 First time users might be overwhelmed by this South Asian iced gummy goulash, but give it time and the initial confusion develops into an exciting ingredient excavation.
By Marissa Sertich 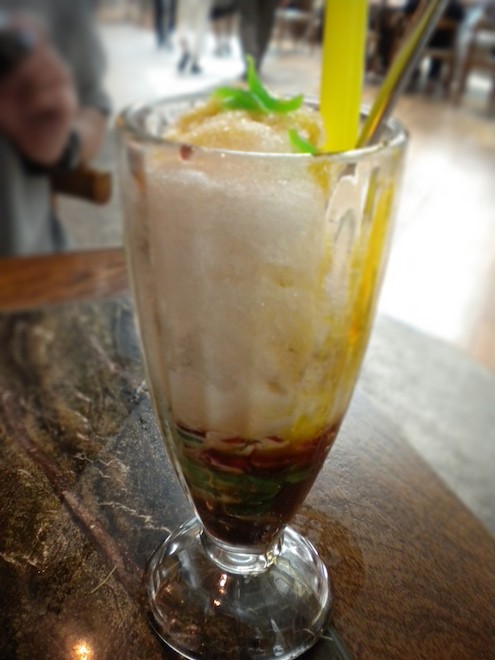 If I moved to Southeast Asia, no one would laugh at my love for Jell-O.  In fact, I am of the firm belief that I could make a profitable business on the other side of the globe with a gourmet Jell-O shop concept – fun molds, jigglers, and even that Sparkling Jell-O variety that was popular for a minute in 1995.

Although the gelling agent of choice in Asia is not gelatin, but agar agar  (a polysaccharide derived from the cell walls of algae), I believe the Singaporeans and Southeast Asians and I are kindred, culinary spirits.  Agar agar has a much higher melting point than gelatin, giving it a shorter texture that does not melt in your mouth.  This less bouncy bite is often not popular with westerners.   But have no fear; Southeast Asian cuisine explores the complete gamut of gelation.

The use of rice starch and sago (a tapioca-like pearl derived from the sago palm tree) is also common practice.  The glutinous rice dumplings make an appearance in a majority of Southeast Asian desserts, accompanied by coconut milk and melted palm sugar.  Tapioca is also a popular ingredient in desserts and specialty drinks, like bubble tea.  Throughout the city of Singapore, hundreds of teens sip milk teas through large straws, bouncing their teeth on the black tapioca pearls.

Then, there is the mung bean – a rogue starch source and the winner as my favorite application of gelation.    The bean starch is commonly used to make worm-like, green noodles typical of a dessert called,  “cendol.”

Like bubble tea’s more flamboyant cousin, cendol is a cacophony of texture.  Its most basic form involves those delightfully disturbing mung bean-worm noodles, coconut milk, palm sugar, condensed milk and shaved ice.  But don’t be fooled- while shaved ice is a component, this is no snow cone.

First time users might be overwhelmed by this iced gummy goulash, but give it time and the initial confusion develops into an exciting ingredient excavation.   Spoonful by spoonful, different textures and flavors emerge from this single-cup smorgasbord.   And once you’ve passed “Cendol 101,” there are more advanced levels, containing red beans, creamed corn, candied palm kernels, sago pearls, glutinous rice and possibly grass jelly.

It may not be the most sophisticated, but it is a fun dessert – stimulating both visually and texturally.  Gelatin, agar agar, tapioca, sago, bean starch and rice starch open a world of possibility, each ingredient offering a slightly different texture, mouth-feel and application.   So, while some might laugh at the joys of a simple Jell-O cup, I’ve been inspired to delve even deeper into the realm of gelation.