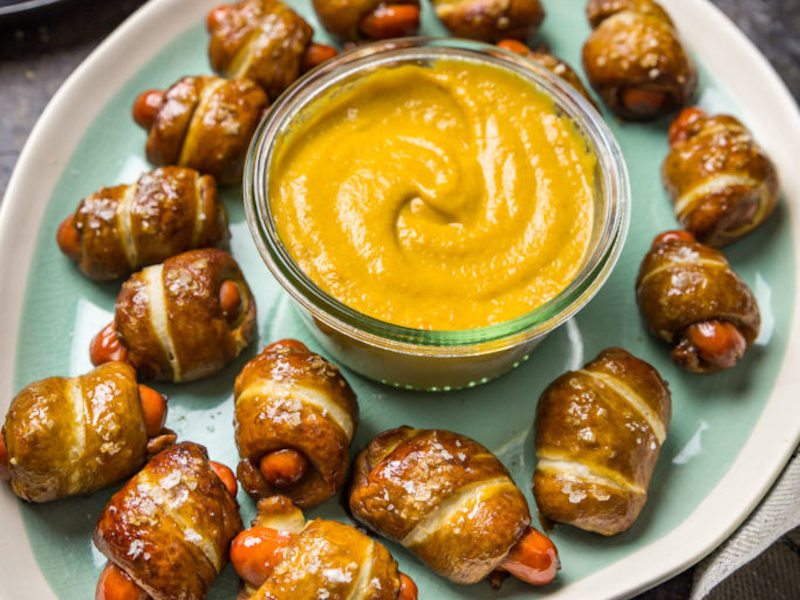 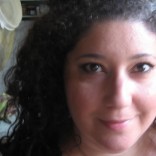 Served with a cheddar stout dip, these pigs in a blanket are wrapped in a thick soft pretzel dough with crunchy salt on top. The ultimate appetizer. 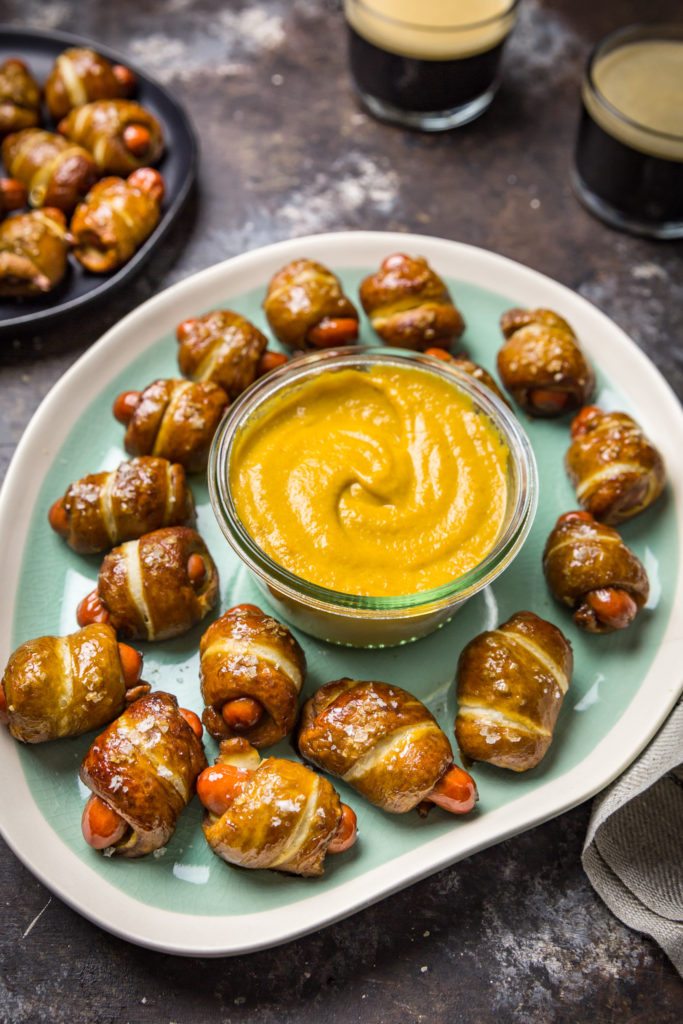 You’ve had pigs in a blanket, but have you taken them to the next level? Have you baked them with a pretzel crust and dipped them in a creamy cheddar and stout sauce? Well, we have, and we want to show you how.

If you’ve ever been to our house for a party, then you’ve probably eaten our standard Pigs in a Blanket recipe. We’ve never blogged them because they’re super dooper easy – though so much tastier and a boat-load more affordable than the frozen packaged kind. ($10 for a dozen, Costco? Really? Are we doing this now?). We simply cut good quality puff pastry into strips, wrap them around mini hot dogs, egg wash them, sprinkle them with whatever, and bake. Delicious, if somewhat pedestrian.

But this year, we wanted to up our party game, so we came up with these: Homemade Pretzel-wrapped Pigs in a Blanket with Warm Cheddar and Stout Beer Dip.

While you can substitute store-bought pizza dough, we decided to go the whole nine yards and make our own. It’s actually really easy, especially if you have a mixer with a dough hook.

All you need is some all-purpose flour, a package of active dry yeast, salt, sugar and little butter. I’m actually quite intimidated by baking but found this to be super easy. Add some warm water (about 115ºF is perfect, so not boiling hot) to the bowl of a mixer (or just a mixing bowl if you’re doing it by hand). Add the sugar and then sprinkle the yeast on top and let it bloom. After about five minutes, it’ll start to get frothy and bubbly and will smell a bit like beer. That’s when you know it’s happy and you can add the flour, salt and butter.

Then mix it with the dough hook (or vigorously with a wooden spoon or your hands if you’re not using a mixer) until it pulls away from the sides of the bowl and looks smooth. If it’s still very sticky after five minutes, slowly add a little more flour, about a tablespoon or so at a time, until it loses that stickiness and begins to smooth out and pull away from the bowl. (The exact measure of flour will depend on the temperature and humidity in your kitchen.) The whole process should take about 7 minutes if you’re doing it with a mixer, and maybe 15 or 20 if mixing/kneading by hand). 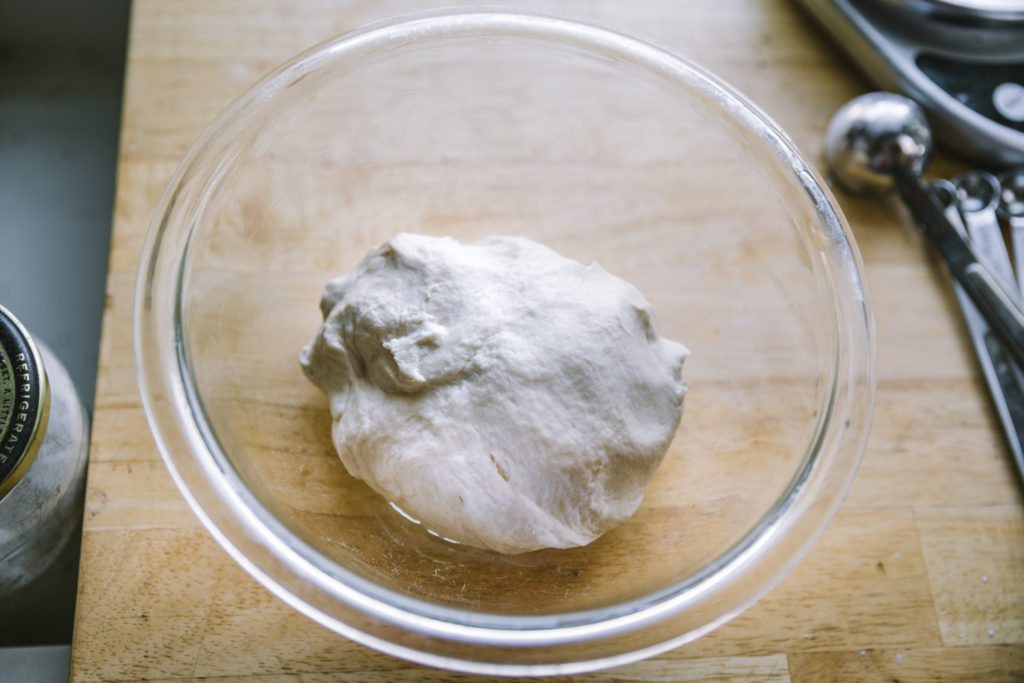 Once the dough is kneaded, place it in an oiled bowl and let it rise until it doubles in size (this should take about an hour).

It will go from this… 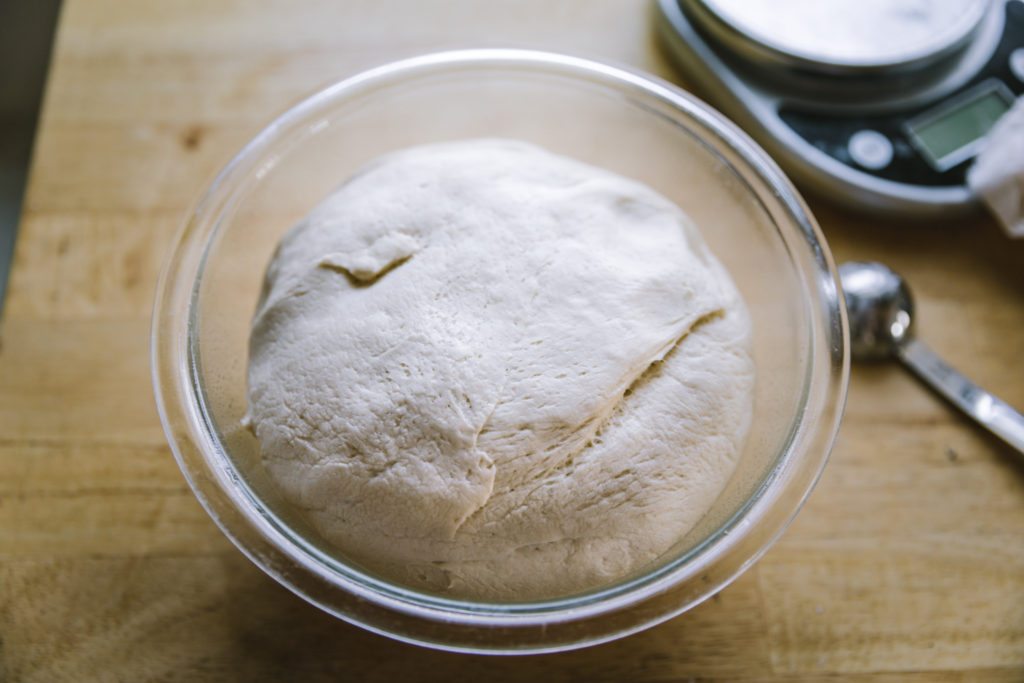 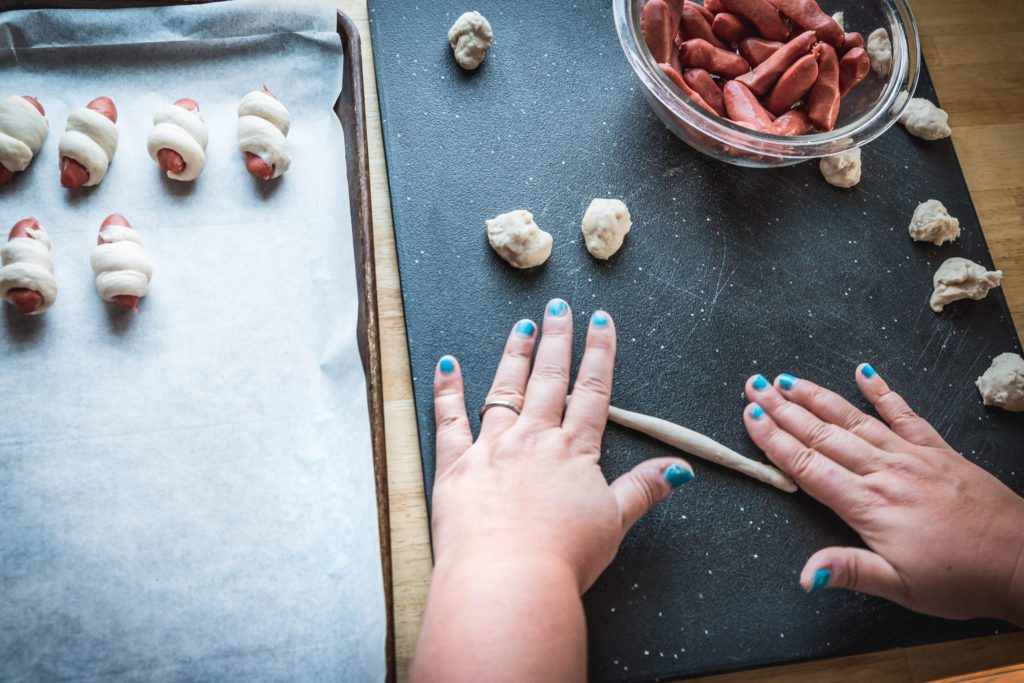 Now you can start wrapping the hot dogs (if you’re using pre-made dough, this is where you’d start). We found about a 9-gram chunk of dough was perfect, but you don’t really need to weigh them. Just pull off about a square inch of dough. Roll it into a rope about 6 inches long and wrap it around the hot dogs, with their little ends sticking out. Make sure to pinch the ends of the dough to make them stick together so they don’t unravel when you boil them.

Once they’re all wrapped up nice and cozy in their little blankets, they’re ready to be boiled in a water, baking soda and barley malt syrup bath. While the barley malt syrup is optional, it adds a really nice sweetness and gives the dough a head start to that deep brown color. This boiling step is what turns the dough from “bread” to “pretzel”. The alkalinity in the baking soda causes the dough to form the dark, chewy crust we associate with pretzels. Some recipes call for dipping the pretzels into a cold baking soda bath but the solution won’t penetrate the dough and it will taste more like regular bread but with a dark outside layer. The boiling method will result in a chewier, darker, more pretzel-like dough. NOTE: Culinary lye is often used commercially which is more alkaline than baking soda and it will produce the chewiest crust. Because it’s very caustic and difficult to work with, we’re sticking with baking soda which still gives good results.

Quick warning, the pot will froth up like crazy so make sure you use a larger pot than you think you need, and keep an eye on it. Work in batches to keep the pretzels from sticking together. In the photo below you can see the boiled pretzels have puffed up a bit and are darker, after they’ve been boiled but before the baking stage. 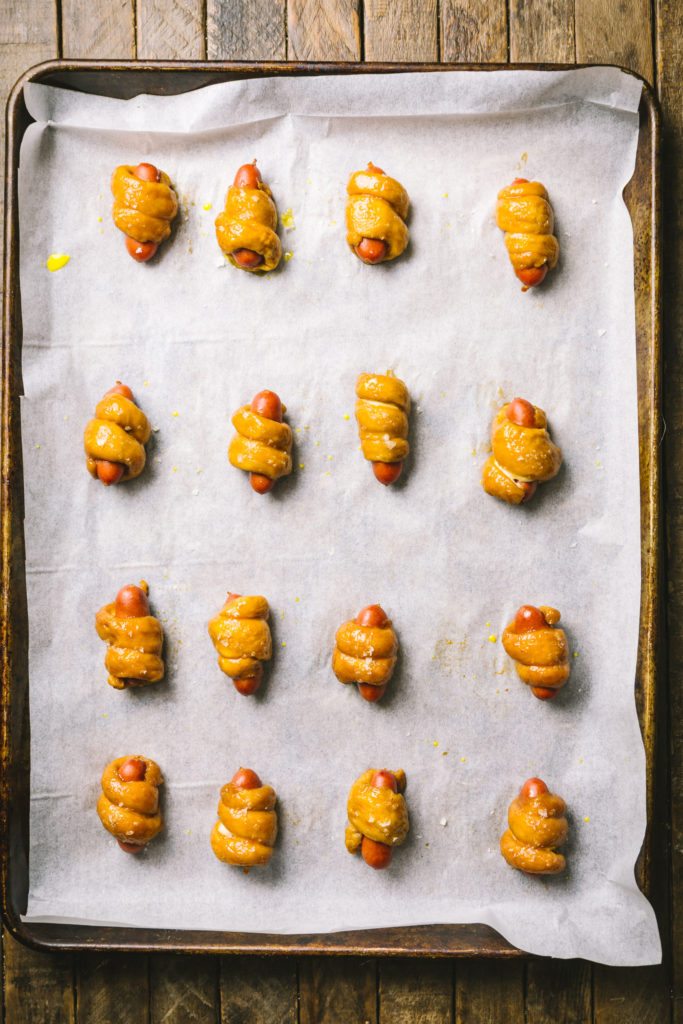 Once your Pigs in a Blanket are boiled, all that’s left is to brush them with a little egg wash and sprinkle them with whatever you want. We stayed simple with coarse sea salt, but you could use sesame seeds, cracked pepper, poppy seeds or even an “everything bagel blend”. Then bake them until the crust is deep brown, about 10 to 12 minutes. 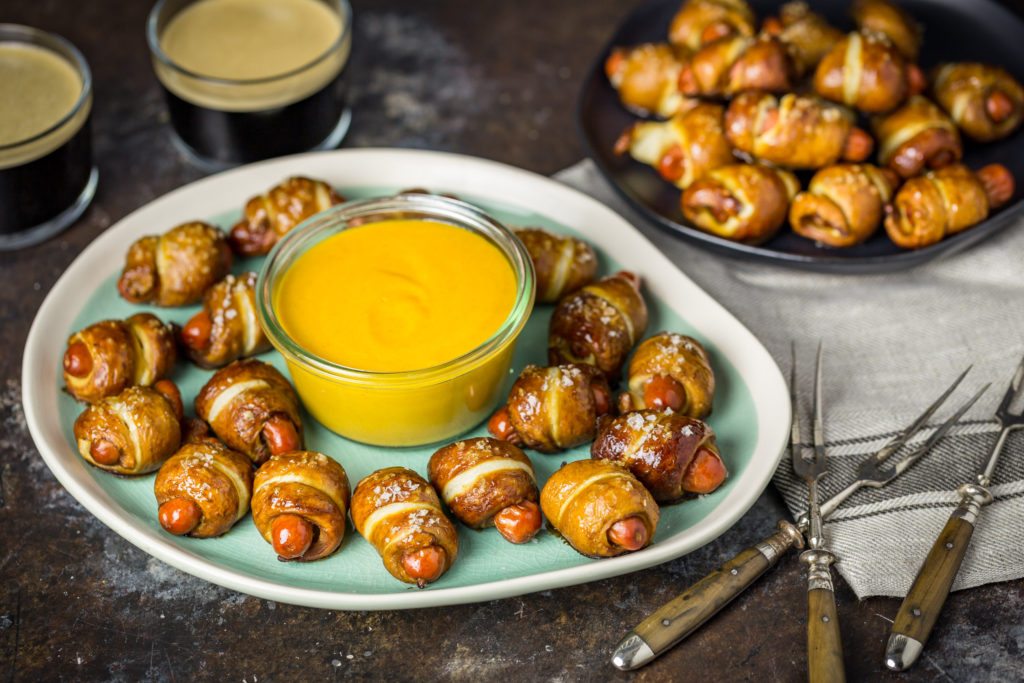 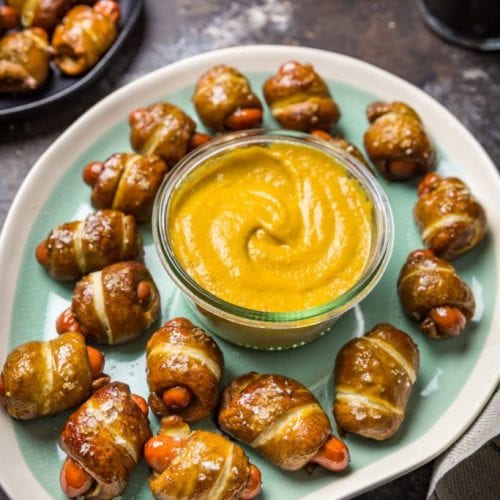 Pretzel Pigs in a Blanket

For the Dough (or substitute pre-made pizza dough)

For the Pretzel Hot Dogs: 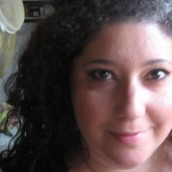 Six Recipes to Rethink the Pretzel