Summer has officially arrived bringing with it hot sunny, weather and the need for refreshing, frozen treats.
By Kelsey Hilts 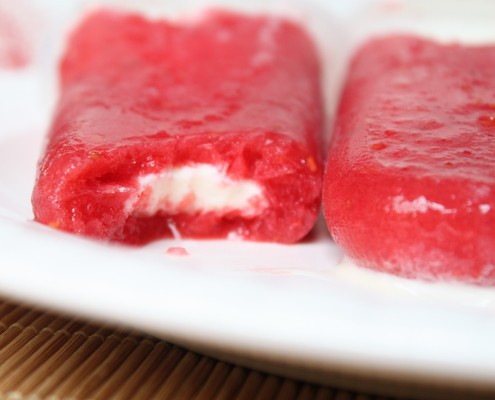 My toddler loves Popsicles all year but with the heat of summer he is always asking for them.  Stores and ice cream trucks offer a variety of fun and colorful options but they are typically loaded with sugar and who knows what else.  Fortunately, Popsicles are super easy to make as long as you have some time to let them freeze.  At the most basic level all you need is some fruit juice and you can use whatever combo of juices and fresh or frozen fruit that you’d like.  If you don’t have fancy Popsicle molds you can freeze your juice mixture in Dixie cups.  And even if you don’t have Popsicle sticks for the cups your kids can simply peel away the cup as they eat the Popsicles.

During a recent Popsicle-making adventure I decided to tackle the Creamsicle.  I remember my Grandma giving my sister and me rootbeer Creamsicles as a summer treat and ever since I have loved the combination of icy Popsicle and creamy, vanilla ice cream.  I had a berry puree made with raspberries, strawberries and POG (Passion-Orange-Guava juice) from some other Popsicles I made and some homemade French vanilla ice cream.  It turns out that this is a divine combo.  The POG gives a subtle tropical sweetness to the raspberries and strawberries which is rounded out by the rich vanilla flavor of the ice cream.

To make the Creamsicles like the commercially-produced versions with Popsicle on the outside and ice cream in the center takes some time.  You have to freeze the four sides of the Popsicle exterior separately and then add the ice cream center.  They would taste just as good and the process would be much quicker if you simply swirled the Popsicle puree and the ice cream together and poured the mixture into the molds.  The ice cream recipe yields one quart of ice cream so you can make lots of Creamsicles or enjoy leftover vanilla ice cream in other ways.  Although I think homemade ice cream is always better than store-bought varieties, if you don’t have time to make it you can use your favorite brand of vanilla ice cream.