Jess Lacey checks out one of this year’s most hyped London restaurants – Pitt Cue Co.
By Jess Lacey

I have never much been one for hype, or trends. Whether this is due to my being wilfully obscure and contrary or just lazy, I’m not sure. 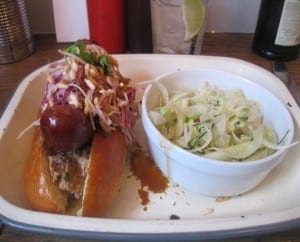 As a teenager, when all my contemporaries were dying their hair blonde and painting their legs orange, I looked like the lovechild of Siouxsie Sioux and Kate Bush. This came more firmly under the lazy standpoint, as being a pasty dark Irish girl it would take a lot less effort and grooming to get me there than as an extra on Baywatch. The London restaurant scene (and by extension food blogging scene) seems to a fairly recent arrival like myself to be all about hype and trends. And of all the London restaurants, I think Pitt Cue Co is probably the most hyped this year due to the combination of insanely good value ( you can get a very filling meal for about £9-12) and a Ledbury trained chef. Every single food blogger and writer has written extensively about it. Except me. Until now. 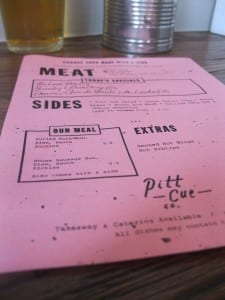 The reason for this is along with my wilful ignorance of hype, I have developed a deeply held revulsion for queuing for anything that doesn’t involve one of the developmental stages of adult life. I am continually baffled by people who not only queue but camp overnight in the hopes of getting tickets to Wimbledon, or seeing Kate Middleton on her wedding day in person. Pitt Cue Co, as probably everyone else has mentioned, should really have been called Pitt Queue Co. Every night I walked by, without fail, a queue of suit types and hipsters snaked up Newburgh Street looking at intervals hopeful, cranky and faint. It was the kind of queue that offered no hope. The windows are covered with lace curtains, so you’re not even sure if anyone knows you are out there, or if the staff are all inside smoking cigars and laughing at the misery of the plebs outside. Queueing should have been included in the Olympics as a sport if you wanted to make it a true London experience. Competitive queue forming throughout Central London is the latest trend (I am 99% sure that half the people inside Meat Liquor are hired extras placed there to justify the elongated queue, since the food, although good, doesn’t do it). 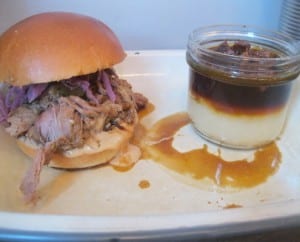 So, when I wandered passed Pitt Cue Co two weeks ago on the way to meet a friend at Bi Bim Bap, I jumped in and started frantically texting a change of venue, while convincing the waitress to put my name on the list as my friend was ‘definitely just outsides Libertys, here in one minute’. She reluctantly did so, I ordered two beers to continue the illusion that I knew where my friend was, and the wait began. It lasted about 20 minutes, but once someone puts a drink in my hand it stops being a queue and starts being a social outing. My bewildered friend eventually arrived and to his credit only made 4 references to wanting Korean food (none of which were made after our food arrived).

The food is of the trendy American BBQ variety, and both of us plumped (literally and figuratively) for the pulled pork accompanied with a side of bone marrow mash. Which sounds awful but is truly amazingly delicious. The pork was melting and juicy, and neatly dodged the dried out and flaky trap pulled pork frequently falls into. The side of pickled deep fried shitake mushrooms was the most convincing argument I have ever been given for buying a deep fat fryer.

We stuck with the tap beer, which seemed like the right accompaniment and the bill came to £36.00 (initially £48.00 as someone else’s gin habit had been added for some reason) for one of the best comfort meals I’ve had in London. Would I queue for it? No, probably not, but there is very little in life I would queue for. If you are the queueing type, this is definitely worth the wait.