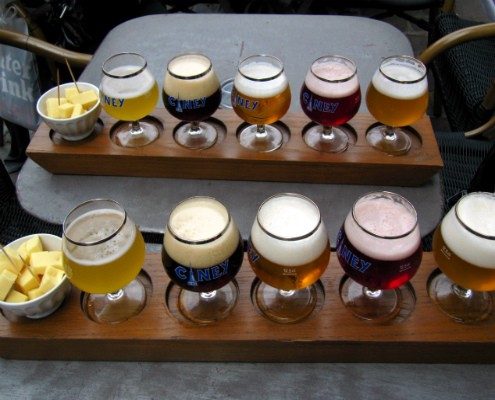 Flawed And Sluggish German Response To The E.Coli Outbreak 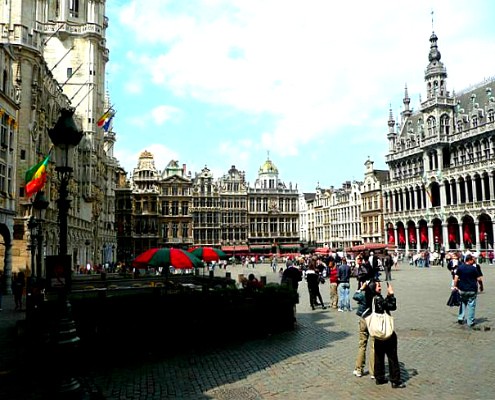 1. The Grand-Place:  It’s THE place to be for locals  and tourists, and if you have only a day or two in Brussels, this is where you need to start  your foodie mission; you can find everything, with the exception of a certain premier chocolatier (see #2), in the streets around the Grand-Place. Brussels’ central square is packed with numerous markets, perfect for souvenir and bargain hunting, and you’ll be shopping in one of the most outstanding open public spaces in all of Europe, surrounded by architectural examples of mercantile Europe at the heights of its prosperity. Wander the Grand-Place in the evenings for the ultimate in people watching with music and street entertainment that runs the gamut from traditional to the bizarre. 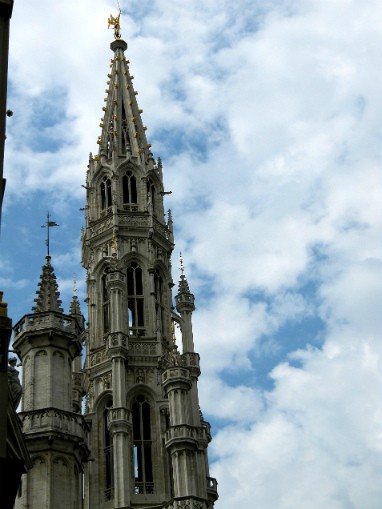 2. Sample world-famous Chocolate:  Brussels may be known as the international capital Europe as host of the administrative offices of the European Union, but some consider it the Capital of Chocolate as well.

Considered the Haute Couturier of Chocolate, a visit to Pierre Marcolini in the Place du Grand Sablon is by far the most unforgettable chocolate experience you’ll ever encounter. Being Belgian by nationality and Italian of origin, his chocolate creations are handmade in Brussels and shipped to their other flagship stores in Paris, London, New York, Tokyo, and Nagoya. 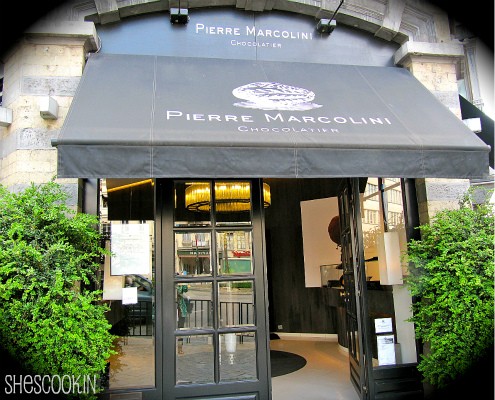 The hushed elegant interior has the ambiance of an exclusive boutique where their handmade luxury gourmet truffles and chocolates are stylishly displayed in black minimalist alcoves. Ascending the plush black carpeted winding stairway to the second floor was akin to entering the penthouse of decadence. The petite, polished crimson chocolate hearts are definitely the best gift to bring to your chocolate loving friends – for big spenders you can have them packaged in a designer handbag like this! 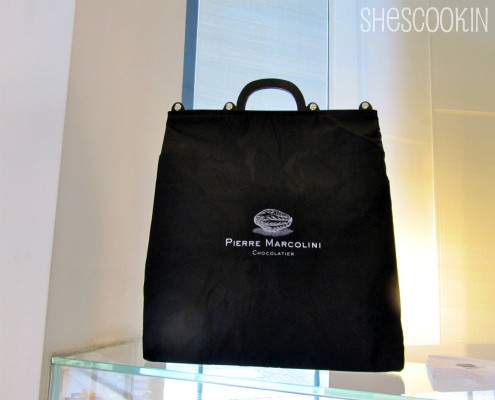 3. Beer Tasting: Besides Stella Artois there are 800 other standard beers produced in Belgium. Varieties range from the popular pale ale to distinctive lambic beers to Flemish red and Trappist beers brewed in Trappist monasteries. Even in Belgium, pilsner lagers like Stella Artois, brewed by Anheuser Busch BE, and Jupiler are the most widely consumed. I’m no beer connoisseur but I had fun sampling different beers and shied away from Stella Artois because I can drink that at home.

This particular tasting was at a cafe in the Grand-Place.  From left to right: Blanche de Bruges, Grimbergen Brune, Ciney Blonde, Kriek mort subite, Lambic mort subite. My favorite was the Grimbergen Brune, a strong, dark amber-colored, Abbey-style beer with a very full bitter-sweet flavor, originally brewed as an Easter beer but now available throughout the year.

4. Rue des Bouchers:  A picturesque, narrow cobbled street lined with mostly seafood restaurants where waiters stand outside trying to lure you inside with their “specials”.  The street’s name is derived from Medieval times when it was inhabited by pork and sausage merchants. There are all manner of reviews on popular travel websites with warnings of high prices, etc. – but we had FUN, and one of the most memorable times of our trip, while having a lunch of moules frites (mussels and fries), the unofficial national dish of Belgium, that wasn’t any more overpriced than other meals we’d had while exploring the city.

It’s not every day that you can be entertained by a group of exuberant futbol players from the UK celebrating their win! 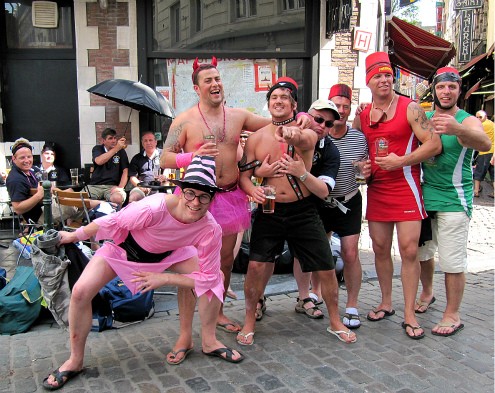 They were tourists, too! It’s not a bad thing being a tourist – people should lighten up and just have a good time where they are!

Yes, there are better restaurants in Brussels, but for the sheer sense of place, at least go and take some pictures. 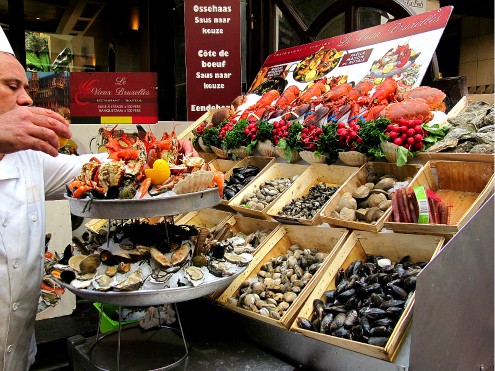 What distinguishes Belgian waffles from other waffles is its larger size, lighter batter (a result of using yeast batter instead of pancake batter), and higher grid pattern which forms deep pockets: the better to hold silky, rich chocolate sauce or the juice of sweet strawberries and whipped cream.

Culinary factoid:  the waffle was introduced by Maurice Vermersch of Brussels, Belgium and was originally called Brussels waffles, but Vermersch decided to change the name to Belgian upon observing the poor geographical skills of Americans.

Enjoyed singly or shared with friends or family – people from all walks of life seek out the crisp-on-the-outside, light and airy on the inside, plain, dusted with powdered sugar or swathed in gooey sweetness, Belgian waffle. 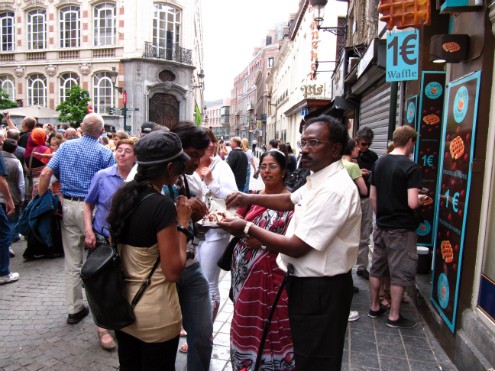 They can hardly make them fast enough for the crowds of hungry waffle lovers! 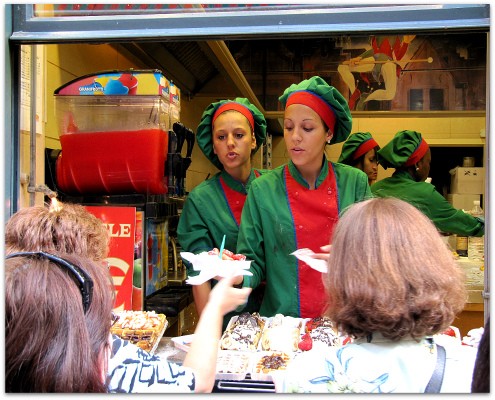 Waffle stands and cafes abound in Brussels and we found ours around the corner from the famous Manneken Pis. Yes, this surprisingly small bronze statue of a young boy taking a, you guessed it by the name, is among the top sights to see in Brussels, and not to be missed, Mannekin Pis is surrounded by multiple legends of its origins, visited by thousands of tourists daily, is often dressed in one of the 800 gifted suits, painstakenly culled by the Manneken Pis historical society. 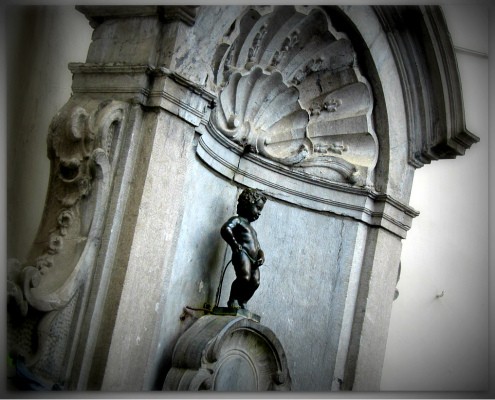 So there you have it…. in my humble opinion, the foodie Top 5 when in Brussels!