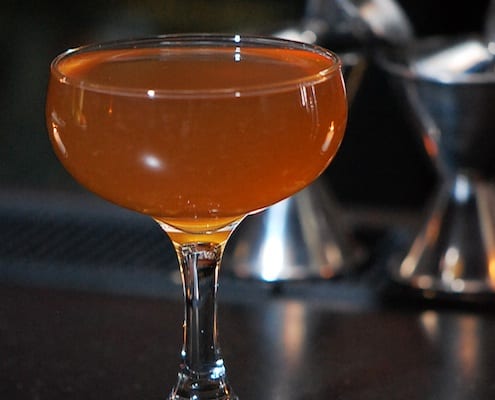 Belly on up to one of these fabulous bars. Give a nod to good ol’ gin, relax and imbibe.
By Carly DeFilippo

Gin is a liquor that many people associate with old men or collegiate over-imbibing Somehow, I escaped both correlations, discovering the classic “G & T” at the ripe tippling age of 23. It quickly became my go-to at sleazy bars and upscale haunts alike. And when my relative lack of cocktail knowledge became a professional liability – motivating me to discover the city’s best mixology – I still remained partial to this purest of spirits. 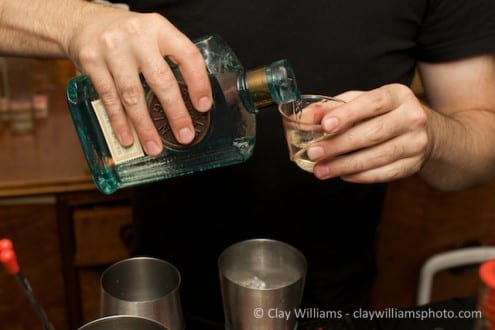 Interestingly, over the past year or so, gin has shifted from a peripheral pleasure to a celebrated ingredient – most notably with the opening of a string of gin-centric bars. So in honor of my longest lasting liquor love, I’m listing off my top gin cocktails in New York City.

3) Hong Kong Garden, Lovers of Today
I was introduced to this tiny subterranean bar by a boy who I was not yet seeing. He, being a poetic personality, knew just where to casually seduce a lady. But that night, he wasn’t the only thing I fell for. The unique addition of yuzu pepper to the Hong Kong Garden’s elegant gin- and lime-filled coupe quickly distinguished it from the other spicy cocktails I’d eagerly sipped around the city. Since then, I’ve returned with other men, but I’m still loyal to the Garden.

2) Negroni, Amor y Amargo – and Weather Up
These days, my go-to cocktail is no longer a G&T, it’s a negroni. Campari inducted me into the cocktail game, and it remains a flamboyant bitter that I never tire of. Needless to say, I’ve tasted negronis all over town, and these two bars are among the best. Amor y Amargo for obvious reasons: they’re the bitters experts. So if you’re looking for both balance and intensity, they’re your perfect cocktail bar – for negronis and more. As far as Weather Up, they won me over with their cubes. Oversized, hand-cut squares, swaddled in sturdy lowball glasses, create the perfect climate for a refreshingly chilly negroni that is (almost miraculously) never watered down.

1) Thick as Thieves, Gwynnett St
I came upon this bar entirely by accident, at the invitation of a culinary networking group. As we nibbled on the restaurant’s addictive, buttery whiskey bread, I consulted with a waitress on my second round. When she brought me this drink, I audibly raved. It was my first encounter with Cocchi Americano and the more unusual quinine. Cut with lime, this libation is less aggressive than a bitters-driven negroni, but avoids veering down an overly saccharine route. It’s easily the most unique, elegantly grown-up gin cocktail I’ve tried to date.

To learn more about the Thieves’ story, I contacted Adam Volk, General Manager at Gwynnett St:

“Originally the Thick as Thieves was made as a riff on the classic Tanqueray and tonic; I was looking to create a more elegant version of my favorite drink. It started out with myself and Doug Mancini and soon after we were joined by Gerry Corcoran and Marissa Evans. After we played around for a while, it was brought to its current form, using Tanqueray, Bonal, Cocchi Americano, lime juice and our house-made quinine tincture. I actually was inspired to use the name from The Jam song “Thick as Thieves”. The name comes from the saying ‘they are as thick as thieves’ – an idiom for close-knit people or groups. Gin and tonic being such a classic combo, it seemed to fit.”

Better yet, for those who like a little food with your booze, Gwynnett St’s kitchen has received raves reviews from numerous publications, including the ever-intimidating New York Times.

So belly on up to one of these fabulous bars. Give a nod to good ol’ gin, relax and imbibe.