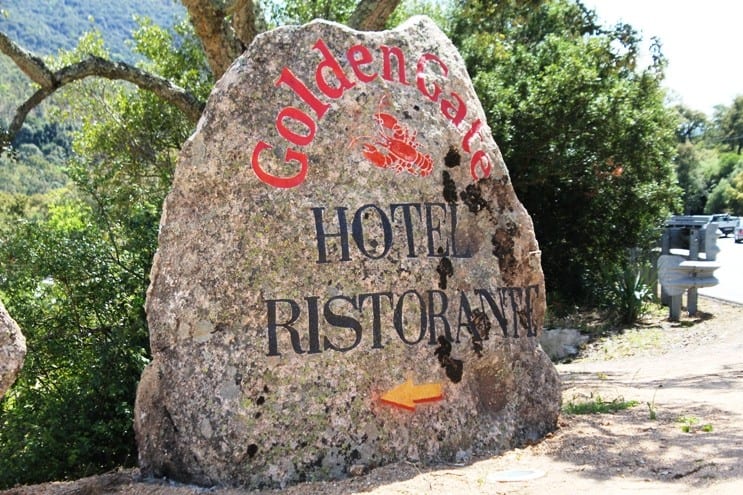 If you ask the locals what’s the best fish restaurant on the north coast of Sardinia – they send you to the mountains.
By Ambra Meda If you ask the locals what’s the best fish restaurant on the north coast of Sardinia they send you to the mountains. Bortigiadas, a tiny town hidden in the nature between the provinces of Olbia and Tempio Pausania is home to Golden Gate, a charming restaurant that the chef and owner Gigi Sini opened in 1991, offering a cuisine based on seafood and local dishes. The incredible scenary of Mount Limbara frames this typical restaurant and hotel built in wood and stone that boasts some of the freshest seafood and fish that the Mediterrenean offers.
Everyday, local fishermen brings their food to Chef Gigi, who offers his customers the possibility to chose what they they want him to cook among the day’s catch set on an ice pond at the center of the restaurant.

Although the menu of the day is fully inviting, from starters to desserts, oredering the ‘Antipasto della casa“, (the house appetizer) here is never a mistake. For 15 euros one can have a taste of all the best Gigi’s kitchen has to offer and the number of dishes this starter includes will leave you speechless. From mussels gratin to octopus and potato salad, this course is sufficient for a whole meal. Here’s the description of a normal 10 course ‘antipasto’ at Golden Gate: 2. Shrimp Crostini: the tender shellfish’s flesh falls apart against the surface of the grilled croutons. Together with the light creaminess of the handmade mayonnaise and and the chilly bite of the fresh celery flakes, these elements create a delicious mouthful, velvety and full of contrasts. 3. Catalan monkfish with cherry tomatoes and red onion: small pieces of  compact and tender fish, enhanced by the light tartness of the tomatoes and the sweet, pungent flavor of the red onion slices. 4. Octopus salad: a generous portion of boiled octopus, seasoned with parsley, lemon and olive oil. The meat, so tender and savory, confirms the freshness of the seafood artfully prepared by Chef Gigi. 4. Seafood salad: this dish, made exclusively of crustaceans and molluscs fished in the Gulf of Asinara, is a fantasy of mussels, shrimp, squid and octopus seasoned with a little olive oil, lemon and parsley that give it an incredibly delicate and light taste. 5. Aragostelle au gratin: ‘aragestelle’, a mix between langouste and prawn, are served on a base of crunchy ice lettuce, whose freshness attenuate the richness of the  seafood covered with a mixture of bread crumbs browned in olive oil, herbs and spices. 6. Mussels au gratin: the shells are are clothed in the same coverage of the ‘aragostelle’, but the more consistent flesh of the mussels allows a more balanced texture of flavors. 7. Cuttlefish meatballs: small patties of cuttlefish lightly breaded and fried, served in a horn of crispy bread and radicchio. 8. Asparagus flan with goat cream cheese and ‘bottarga di muggine” (grey mullet’s roe): a delicious appetizer where the sweetness of the asparagus mousse is well contrasted by the flavor of the melted cheese and the fish eggs sprinkled on top. 10. Oristano baked clams:  In Oristano, a city on the west side of the island, clams are particularly large in size and intense in flavor. At Golden Gate they come in foil, seasoned with a mixture of olive oil, lemon, garlic and parsley. Once Marco, the waiter, cuts the top of the wraps, a cloud of steam effuses, releasing and inviting and tasty aroma. ‘Antipasto’ at Golden Gate is anything but a little starter, but if you feel like there’s still room for something, order a portion of their amazing seafood risotto. The rice, cooked to perfection and flavored with saffron, arrives garnished with mussels, shrimps, squid rings and aragostelle. Simply delicious.
Golden Gate, s.s. 127 Sassari-Tempio km 53100, Bortigiadas (OT), Italy, www.hotelgoldengate.it