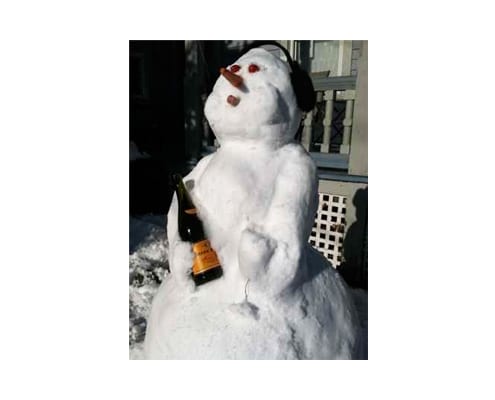 People in food are hardworking, expected to show up at all time, even when the weather doesn’t allow it. Marissa Sertich details a snow-filled day in the life of a baker.
By Marissa Sertich

Snow days are for pansies – That’s what I learned my first year working as a baker. The newscasters were predicting Armageddon, but I knew that I would be expected to show up for my shift. We could have been in the middle of the zombie apocalypse and I would be there cutting out scones and mixing brioche dough.

My shift started at 6am and 5 inches had already accumulated. Typically, I drove to work, but I had a good parking spot and in South Boston, those are more valuable than the Stanley Cup. Almost everyone in Southie has street parking so you have to drive around for a half-hour before finding place where you won’t get towed. If you live in Southie, you will get towed. At least once.

So, I headed out to catch the 4:50am Number 9, and when I saw that the Dunkin’Donuts on the corner was closed, I knew the bus would never come.

If Dunk’s was closed, it was more than likely that everything else was also shut down – including public transportation. Boston runs on Dunkin’s – literally.

Luckily a cabbie saw my pathetic self shivering at the bus stop and he offered me a ride. After a toilsome journey of getting stuck in the middle of an intersection and getting out to help push the cab to safety, I finally made it to work. And on time.

Cooks are part-pirate, work long hours and are expected to show-up when the rest of the world hibernates. In fact, a young baker named Joe, called to see if we open and our boss teased him unforgivingly for the rest of the week. “Yes little Jo-Jo we’re open, but maybe there will be an early dismissal from Kindergarten today. Don’t forget to bring extra diapers with you when you come in! ”

So, to make a long story short, throughout my working career, I’ve never known snow days. This past weekend with the big storm I thought a lot about all of the cooks out there, trekking through the blizzard to make it in time for dinner service. I called up an old friend to ask if their restaurant was open. He just laughed and told me how they’d scheduled a couple people to actually stay overnight so there would be someone to work on Saturday. Currently, I’m a 9-5er and felt sort of guilty hearing this. I am proud of that demented dedication shown by cooks.

Today, I built an homage to the cooks – A snowman sommelier. A snowmmelier. I hope that all of you restaurant people out there find time to enjoy a couple bottles of wine after all your hard work during the storm. Cheers!

The Real Story of Chateau Montelena