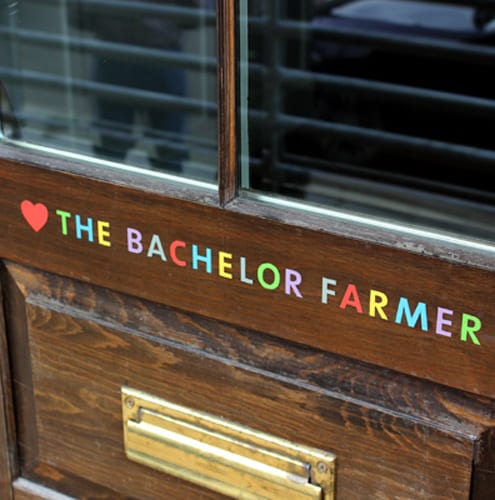 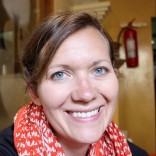 Bowen Close checks out one of the most talked about restaurants in Minneapolis, The Bachelor Farmer.
By Bowen Close

I may have grown up with a vaguely Scandinavian heritage in an overwhelmingly Scandinavian region of the United States, but my experience with the foods of that area of the world is limited at best. Sure, pickled herring was on the buffet table of every family holiday as far back as I can remember and I’m a sucker for fresh lefse rolled with butter and sugar – oh, and I suppose I’ve had the meatballs at the Ikea restaurant time and again – but that’s mainly the extent of it. So my husband and I decided to wrap up our few glorious weeks in the Twin Cities with dinner and drinks at The Bachelor Farmer, one of the city’s most talked-about new restaurants. According to its website it “draws inspiration from contemporary Nordic cuisine,” and this influence was clear in everything from the menu to the wallpaper. 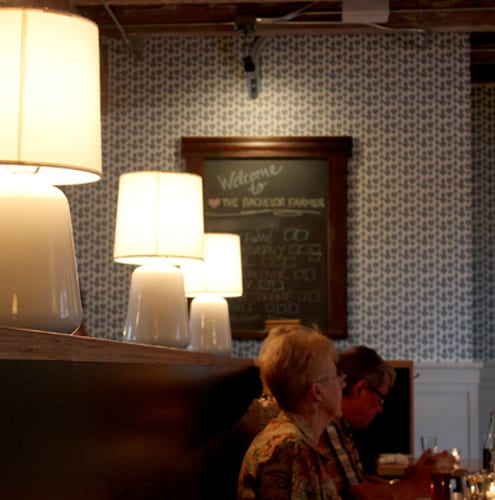 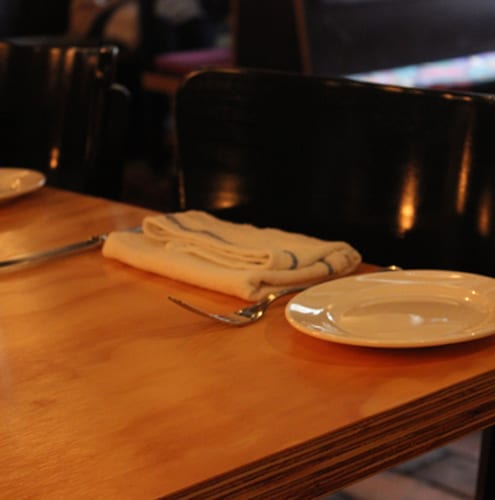 This was probably the farthest I’ve ventured into Scandinavian eats, and while I certainly wouldn’t call it traditional it brought together many of the elements I’ve seen and experienced through my life in the Midwest. Cured fish, rye breads, open-faced sandwiches, aquavit, and plenty of local ingredients and seasonal flavors. (But no lutefisk, ever, they say.)

The interior of the restaurant was perfectly suited to the Scandinavian-influenced menu, with sleek, simple, wood-based furnishings (think Ikea, but far higher quality and with more attention to design) and upholstery and wallpaper featuring the classic, modern patterns of Scandinavian design. The location in an old industrial building allowed for open brick facades and exposed beams, all of which are beautiful and lends a good character to the space. 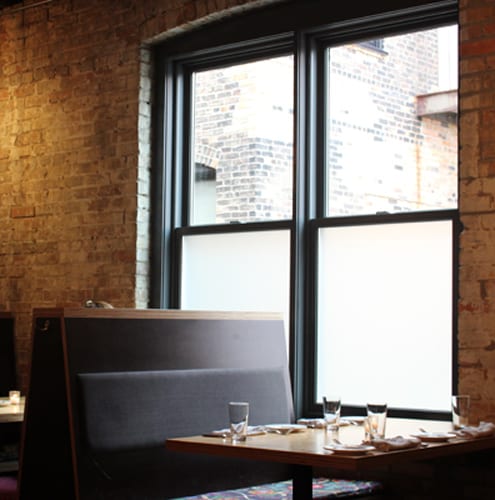 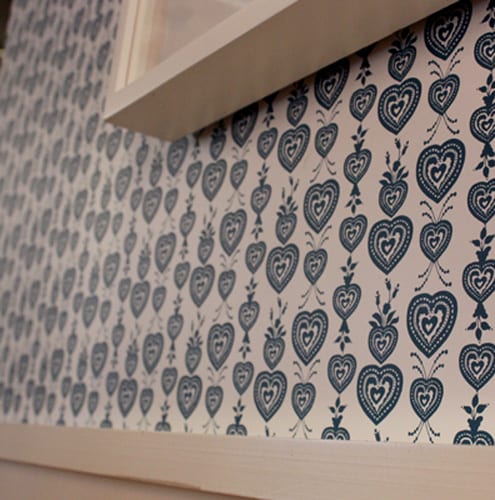 The Bachelor Farmer and its companion Marvel Bar, a speakeasy-type lounge underneath the restaurant, are owned by the Minnesota Governor’s two sons, and has thus played host to some of the area’s biggest names. It was, in fact, the location to host a luncheon for President Obama during his trip to Minnesota late last spring. But the restaurant’s reputation and popularity are not from political fame alone – it was also listed in Bon Appétit’s recent list of the 10 hottest new restaurants in America, and has been positively reviewed from almost every media organization in the Twin Cities (and a huge selection of my friends in the area). 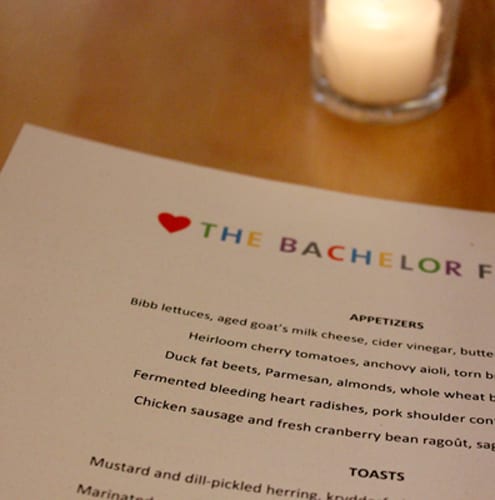 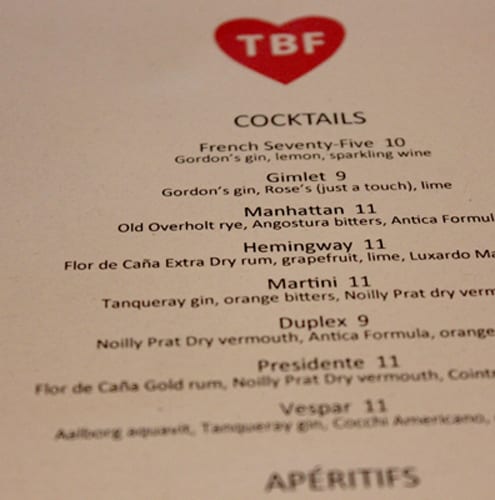 As we looked at the menu to order, we were a little overwhelmed. The ever-rotating seasonal menu featured a selection of appetizers, “toasts,” entrees, and sides, and we weren’t sure of the best way to try a variety of things. Our lovely waitress (service was incredible all evening) suggested that each of us order an appetizer or a toast, an entree, and a side to make for an appropriate amount of food. We went off-track a bit, ordering an appetizer, two toasts, an entree, and two sides for the both of us, but found it to be a reasonable and filling amount of food. Before ordering, we received a plate of radishes, butter, salt, and housemade black sesame crackers, which made for a nice departure from a traditional bread basket. 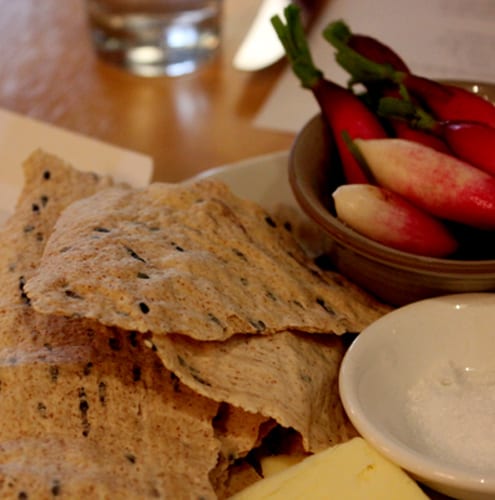 Appetizer selections included a variety of salads and salad-type options, including the incredible one of butter lettuce, aged goat’s cheese, vinaigrette, and pain de mie croutons that we ordered. Along with this and our radish/cracker plate we shared a chilled glass of aquavit, a traditional Scandinavian spirit traditionally flavored with (among many other things) dill or caraway.

The toasts are, as far as we’ve heard, the crown jewels on Bachelor Farmer’s menu, and we would definitely agree. Each one comes with four pieces of toasted bread (type of bread depending on the one ordered) and toppings with which to make yourself the traditional Scandinavian open-faced sandwich. We ordered two, both of which were fantastic. One included mustard and dill-pickled herring, cornichons, salmon roe, and krydderfedt, a schmalz-like spread of pork fat and crispy pork bits, paired with rye toasts.  The other featured an amazingly silky duck liver pate, a tangy and sweet sauce made with ground cherries (kind of like a less-sweet, slightly seedy grape), and whole grain mustard, paired with slightly-sweet white bread toasts. These were just two among a list of six or so toast options, and I daydreamed about how perfect they would be along with cocktails in the restaurant’s bar (the one attached to the dining room, not Marvel Bar, which is a separate-but-partnered business downstairs), if one wasn’t interested in staying for an entire meal. 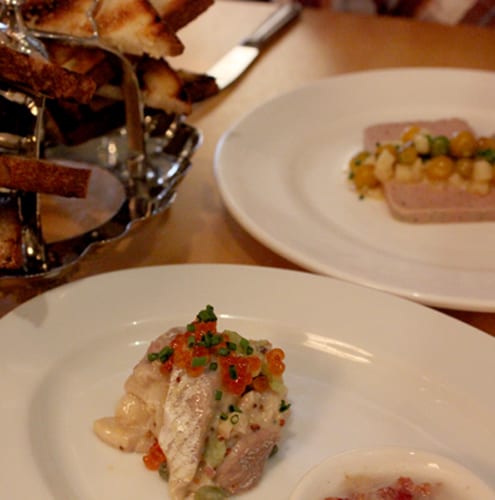 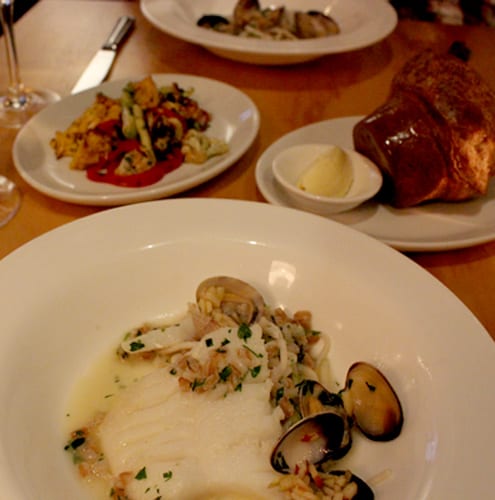 For our entree we ordered the market fish, which at that time was poached cod and Manila clams with farro and barley, shredded kohlrabi, finely diced Sweet 16 apples, and a lovely, buttery broth. For sides we ordered roasted and chilled cauliflower, peppers, and pole beans, and a hot popover with honeyed butter, both of which were fantastic.

With the main part of the meal we each ordered a glass of wine, available in limited form on the menu but also through the restaurant’s innovative system of serving wine. Patrons are welcome to order a full or a half bottle of anything on the menu, and glasses leftover from purchased half bottles are listed on a chalkboard in the dining room, from which anyone is welcome to order.  This drastically increased the offerings of wine by the glass. The restaurant also offers a selection of local beers (including one from a brewery less than 500 feet from the restaurant) and a unique array of handmade cocktails, with a menu strongly correlated with downstairs Marvel Bar (since the bartending staff is shared).

After dinner we headed down to Marvel Bar for a cocktail, and despite the slightly confusing entrance (they take their speakeasy vibe seriously, it seems), emerged from what felt like a service entrance hallway into the dimly-lit and very well-designed bar. On the suggestion of a good friend I ordered the Oliveto, a gin fizz-like cocktail with gin, lemon juice, simple syrup, Licor 43 (a citrus-vanilla liqueur), and emulsified egg white and olive oil. I’ve come very close to saying it was the best cocktail I’ve ever had – creamy, sweet, tangy, and sort of like lemon meringue pie – but I know that cocktails can be well-suited to different circumstances and that this one wouldn’t fit everywhere (like by a campfire, for example, or after coming in out of the cold).  I am certainly looking forward to trying it at home, though. My husband ordered the daiquiri, a simple mix of lime juice and Flor de Caña extra dry and gold rums, if for no reason other than we’re both huge fans of that particular rum and it was exciting to see it served in a bar, which happens very rarely. It was simple and fantastic, and we were impressed. 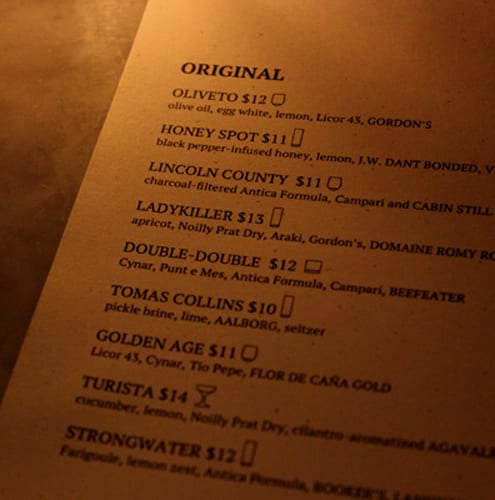 The prices at The Bachelor Farmer and Marvel Bar certainly don’t make it an everyday sort of place, but I will certainly recommend them to people traveling through or those looking for a celebratory dinner, and I definitely hope to make it to both places again sometime soon. 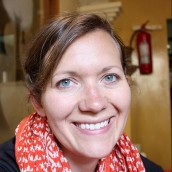