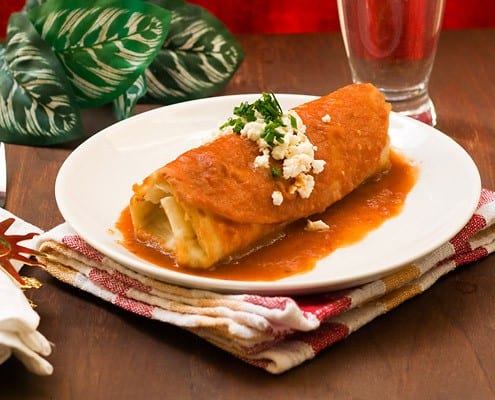 Tomato Soup with Basil and Coriander

Chimichanga is a flour tortilla stuffed with meat, beans, or anything you like, rolled up and deep fried.
By Nancy Lopez-McHugh 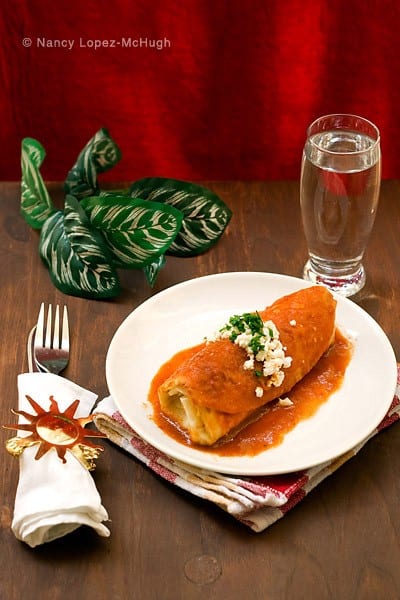 Chimichangas are deep fried burritos also known as Chivichanga or chimmy chonga, according to Wikipedia anyway. For those of you that don’t know what a Chimichanga is, it’s a flour tortilla that is stuffed with meat, beans, or anything you like, rolled up then deep fried. It can be served topped with any of the following, yellow cheese, sour cream, guacamole, salsa or just plainly fried. Sometimes it is  served with a side of rice and beans, lettuce and salsa. It all depends on where you purchase your Chimi.

Confession time, I had never heard or seen a Chimichanga until I moved to the US. If memory serves me right, the first time I saw one was at a popular junk food restaurant trying to pass of garbage food as “Mexican” I’ve always assumed that it was another American invention of Mexican food. To be fair I decided to do a little online research as to the origins of the Chimichanga.

Per Wikipedia Chimichangas are “popular in Southwestern U.S. cuisine, Tex-Mex cuisine, and the Mexican states of Sinaloa and Sonora.” Several websites credit the invention of Chimichangas to a Tucson area restaurant post World War 2. According to legend they came to be as an accident, when a cook dropped a burrito into the deep fried. The cook apparently yelled out “chimichanga”, which according to many websites means “thingamajig” in Spanish. ( I’d like to point out that that’s news to me. What do you Spanish speakers think? ) Other’s say that she most likely was stopping herself from saying “chingada” a Spanish swear word and instead used Chimichanga, an Indianism of the Spanish “chango quemado” meaning burnt monkey. Others sources state that it was indeed Mexican immigrants who introduced the Chimichanga to Arizona. I don’t know which is true or what to believe. The funniest and perhaps most ironic thing I found was that the state of Arizona is now petitioning to make the Chimichanga their official food.

Personally I say Arizona can have the Chimichanga, that way it can stop being considered “Mexican” food. I’ve never have and never will consider Chimichangas Mexican food. There I said it. I’m not the only one that feels this way, a brief discussion with family members ended with them being in agreement. I’m not trying to be a Mexican food snob, I just want to help people understand the differences between authentic Mexican and Tex-Mex cuisine.

Now just because I don’t consider foods like the Chimichanga Mexican, it doesn’t mean I don’t like to eat them every once in a great while. This recipe is actually not my own, it is hubby’s recipe. My guerito (relax it’s not a derogatory word, just means light skinned, eyed, and or light haired person) learned this recipe from a restaurant cook, who happened to be a Mexican woman living in the American southwest. In case you are wondering yes we have had discussion/disagreements about the fact that it was a Mexican woman who taught him the recipe. I hold my ground and won’t budge even though it was a Mexican woman who taught him the recipe. He says,  “I don’t know what to tell you, it was a Mexican woman in a Mexican restaurant, owned by Mexican-Americans, who taught me the recipe.” It usually ends with me giving him a dirty look and telling him he’s wrong and I don’t care. Then round two begins because I’m stubborn like that.

Well, onto the recipe. Hubby says that she not only taught him how to prepare, fold and fry the Chimichangas, she showed him how to make it enchilada style. Hubby says, ” You take a giant flour tortilla, like the burrito kind, fill it with beans, meat, hot sauce, chiles. Then you fold it up tightly to prevent spills, put it in the deep fryer, fry until golden brown and crispy. Place the chimichanga in a baking pan, cover in American style enchilada sauce, sprinkle that American white and yellow “Mexican” cheese. Put the Chimi in the oven, and bake until the cheese melts. Then you serve it.”

This time I was in charge of making our Chimichanga dinner. I followed his instructions except that I refused to use any prepackaged sauce and yellow cheese. Instead I made my own enchilada sauce from scratch and used homemade queso fresco. If you don’t have access to queso fresco use Feta as a substitute.

1. Heat a griddle or frying pan, once hot toast the chiles. Turn often to prevent burning, set aside. Brown the garlic cloves, onion and tomato. Allow to cool and peel off tomato skin. Remove the stems from chiles, and seeds if desired. Place all ingredients in a blender and blend until smooth, adding a little water if necessary. Heat  a little bit of oil in a frying pan, strain the blended mix into the frying pan. Careful as it can splash. Saute for a few minutes, taste and adjust salt if necessary.

Pour the sauce over the Chimichangas, sprinkle some cheese and bake until cheese begins to melt. I didn’t want the cheese on my Chimichana melted, and that’s how you see it on the photos. Queso fresco doesn’t melt like other cheeses so careful not to burn your Chimichangas. 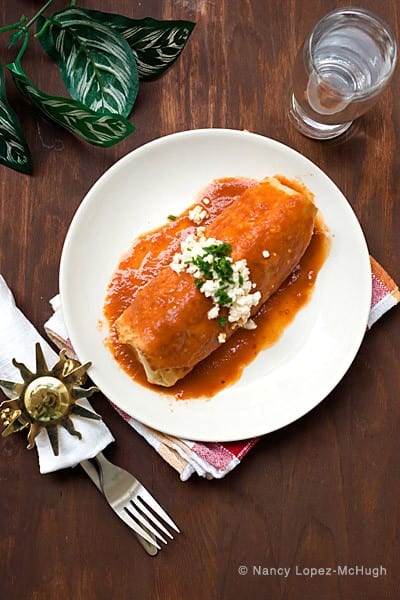 P.S.
Just because I posted this Chimichanga recipe doesn’t mean it is Mexican. I hold my ground, Chimichangas are not Mexican food.