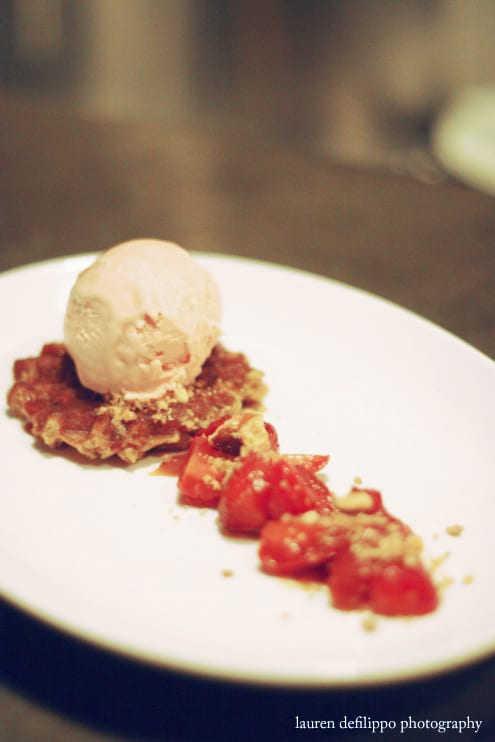 The true restaurant gems are the places that consistently satisfy and surprise you, steeping over time until they blossom into a story.
By Carly DeFilippo

As a food writer, it’s easy to to fall into a habit of extremes, toggling from insatiable to oversaturated. This is typically the curse of chasing trends, following the buzz or, worse yet, a desire to be the first to discover a new, unsung food locale. But then there are the restaurants we discover off-the-clock. The plates that satiate us, without leaving us feeling stuffed. The mouthfuls that remind us why we got excited by food in the first place—which, for me, has nothing to do with standing in line three hours for a cronut.

My food appreciation began with the ingredients at my disposal and the thrill of testing out a new flavor or texture—most especially, those with a specific taste of place. In short, I fell hard for cooking with local ingredients, and the chefs who thrill me most are the ones who revive that feeling of discovery.

In Manhattan, Northern Spy Food Co. is a singular example of this type of restaurant. Over the past year, I’ve eaten there four times—more than any other restaurant, except maybe the more casual Co. Pane—yet I never got so far as to write a review. They were meals without ulterior motives, an opportunity to indulge in anonymity. In fact, I ate there the way critics would ideally eat at restaurants: often, and casually, without explicit intentions to review them. The true gems are the places that consistently satisfy and surprise you, steeping over time until they blossom into a story.

Let’s start with Northern Spy’s kale salad. Or don’t, in fact. It’s been raved about so often that it overshadows other dishes on the menu – plates like the equally irreplaceable Elysian Fields lamb or smoked bluefish rillettes. In that spirit, I decided on one rule for this review – if I’ve already eaten it, it’s off the table.

And so it was that I started off with pickled eggs. Normally, this wouldn’t be a dish that I’d choose, as all my favorite egg preparations include a runny yolk. Pink with beet juice, they were certainly acidic but also mildly sweet. The yolk maintained a certain creaminess, if the white was a bit more resistant than I’d usually prefer. But I approached them objectively, and they grew on me with each bite, providing yet again that N’Spy sense of discovery, the same that I’d found before.

The rest of the dishes were less challenging, but no less interesting. First up, the chilled watercress soup. The texture of this gorgeous pastel palette of food is nothing short of spectacular, coating your mouth with cool green flavor, without the cumbersome weight of cream.

Then came the strawberry salad with goat milk yogurt and fresh herbs. Tart and sweet, it featured both fresh red and pickled green berries, cut with the funkiness of goat cheese, the refreshing crunch of fennel, and the bright, lemony bite of sorrel. I’ll go right ahead and call it the salad of the summer.

Speaking of summer, I highly recommend the refreshing celery tonic cocktail. I’d been eyeing it for months, and it met all my expectations, balancing refreshment with bitter and vegetal notes. For those who like ginger, the Spy Glass is the spicy, fruitier cousin of a Bloody Mary, and also shouldn’t be missed.

Back to the eats, the warm squid salad arrived all tender coils: squid, carrot and daikon radish, garnished with a streak of dark black ink. Accented with the rich flavor of pork belly, it reminded me of a pork and clam dish I once ate in a bistro in Lisbon, a remarkable marriage of land and sea.

For our first entree, we tried the Porgy special—mildly briny and flaky, but more oily than flimsier white fish. Served in a green garlic broth with favas and yellow eyed beans, it was fragrant and comforting, the tender beans yielding beautifully under the impeccably moist, pink-tinged fish.

But the real scene-stealer was the sleeper on the menu: the broccoli with “cabbage, mustard and pretzel.” If it sounds like a vegetarian beer hall dish, you’re not entirely off track. Tender stalks, breaded and fried in crisp pretzel crumbs, made me wonder if I ever needed to eat juicy sausage again. Negotiating over who would get to drag the last floret through the mustard and pesto sauces, I couldn’t help but think that this was no mere vegetarian alternative. This was a definitive dish – the kind that can make a chef’s career (kale salad be damned).

Ending on a sweet note, (and still entranced by the pretzel-breaded broccoli stalks) we opted for the pretzel waffle with strawberry ice cream and caramel sauce. A flatter, compact, Scandinavian-style waffle, it brought al dente texture and salt, an excellent contrast to the sticky caramel and creamy, concentrated strawberry scoop. Yet again, we found ourselves bartering for the final bite.

If this sounds like a rave review, it is. I don’t promise that each of your taste buds will explode with new ideas or ingredients, but—like a good tea–the dishes at Northern Spy develop as they steep. Rather than being at their best on the first bite, they evolve as you uncover each layer of complexity. It’s the ultimate in “slow food,” in fact. Not only is it local and sustainable, but you’re best eating it at a leisurely pace, lest you let one of the subtler elements pass you by.