Within a few hundred meters in Hong Kong, you can move freely from Spanish Paella and Greek Pies to Pad Thai Noodles and Mexican Tacos.
By Ambra Meda 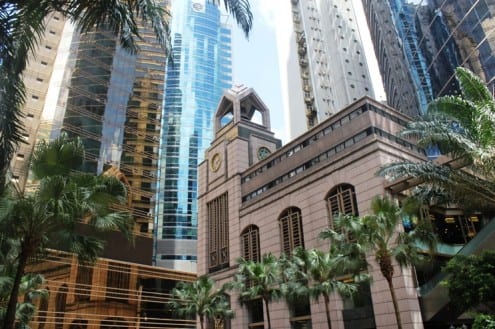 Usually one street is not enough to grasp the spirit of a city, but it can certainly be a good starting point to penetrate its surface.
The district of Soho, where futuristic skyscrapers alternate with leafy lanes flocked with Cantonese signs, well represents the multiculturalism of Hong Kong, that flaunts a folkloristic balance between the indigenous Chinese background and the colonial culture that shaped it, pushing it toward modernization. 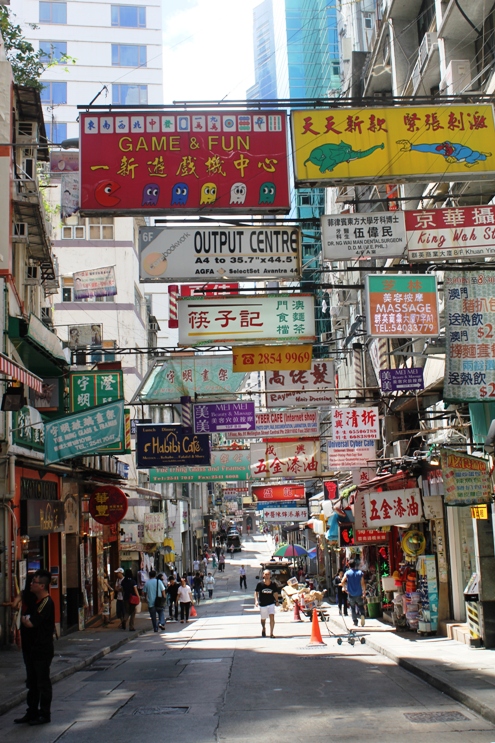 A colony of the United Kingdom from 1842, Honk Kong has been transformed in 1997 into a Special Administrative Region (SAR) of the People’s Republic of China and has maintained the trace of its cultural and linguistic marriage with the West, which not only is evident in its economic, legal and educative system, but also in its street culture and food.
Staunton Street, with the upper section of Elgin Street, constitutes the heart of the Soho entertainment area, featuring a number of restaurants, cafes and bars that bring the world’s best food to China.
If at any corner it’s possible to try traditional local street food, such as the delicious Sesame Mochi Balls (little glutinous rice cocoons that envelop a piping hot black sesame filling and are crusted with sesame seeds), the restaurants and cafes of the area add an international touch to this unique city. 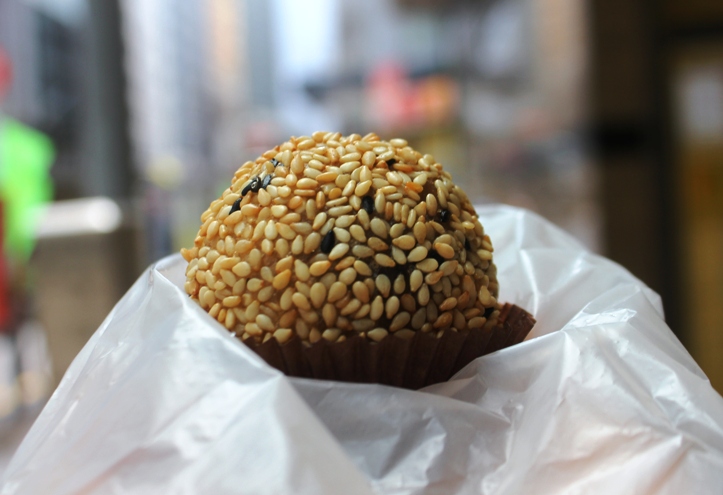 Within the space of some hundreds of meters, one can move freely among a Spanish Paella and a Greek Date Pie; Pad Thai Flat Noodles and Mexican Mahi Mahi Tacos; Portuguese Egg Tarts and Indonesian Black Sticky Rice. 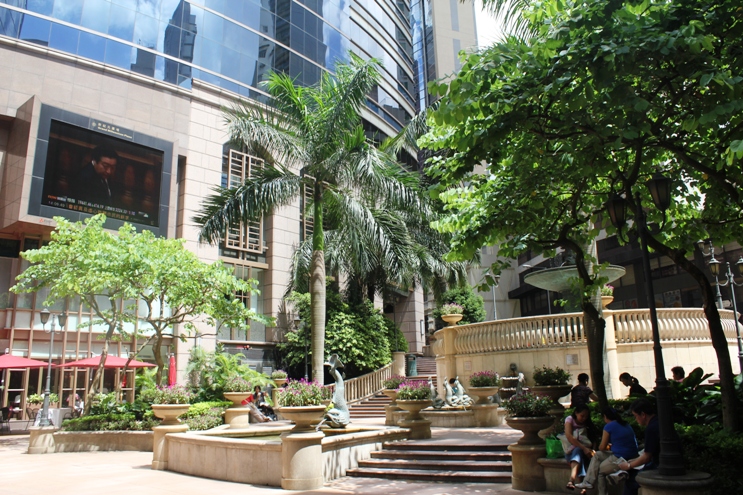 “Egg Tart” or ‘Pastel de Nata’ is a custard pastry representative of Portugal, which is commonly found in Macau (a Portuguese colony), and the surrounding mainland China area. The confection consists of an outer flaky crust brimming with a creamy and gold egg filling and it’s usually served piping hot. The ones at Tai Cheong Bakery, whose crispy shell encloses a velvety and smooth custard, have been rightly voted the Best Egg Tarts in Hong Kong by CNN. 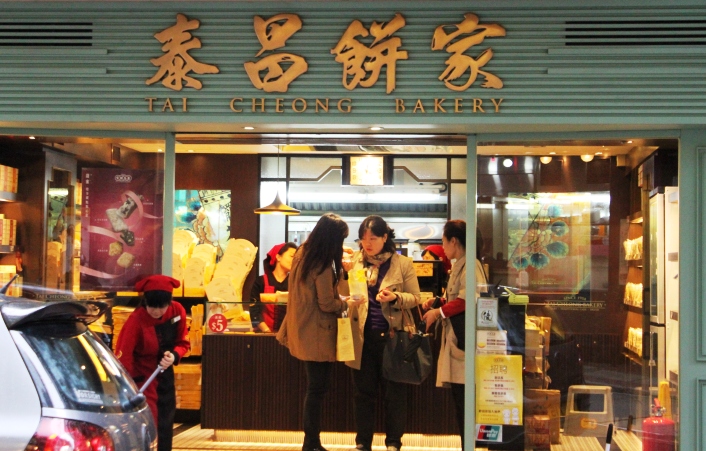 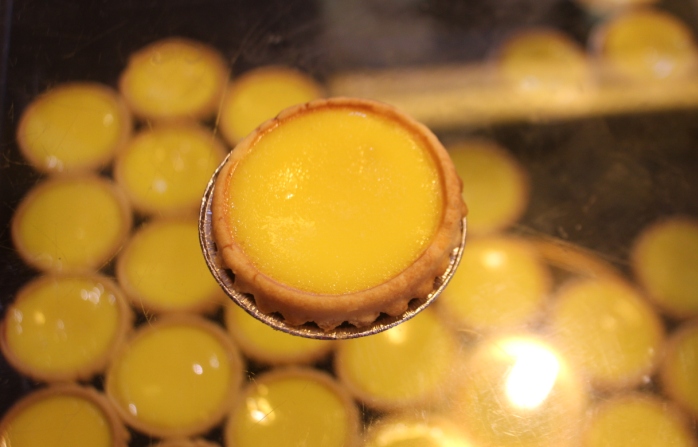 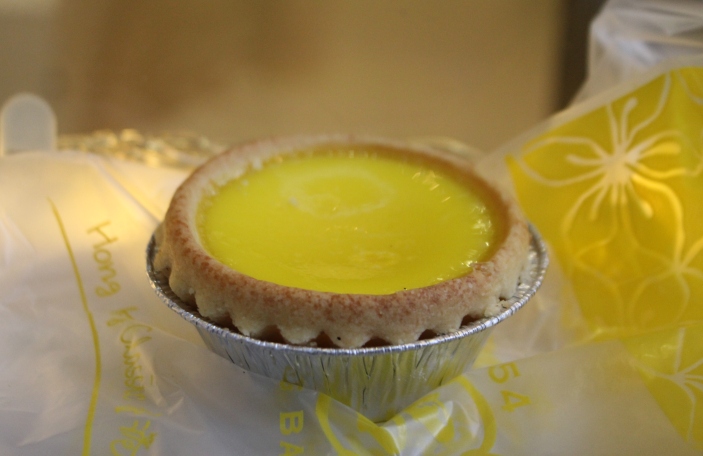 2. PAELLA at Rico’s Spanish Restaurant & Bar, UG, 51 Elgin Street, Soho, Central Hong Kong
The best thing about Rico’s is the atmosphere. Relaxing, charming, romantic. The two Chinese guitarists dressed up like Zorro that play flamenco give the place a Spanish flair with some Asian notes. The House Paella with chicken, chorizo and seafood is more memorable for the dimension than the flavor. Whereas the dish is generously loaded with pieces of meat and fish, the rice is overcooked and has lost all its bite. The Berenjenas al Horno, a tapas made with baked aubergine topped with cheese and tomato, is truly delicious and makes you forgive them for the inconvenience of the rice. 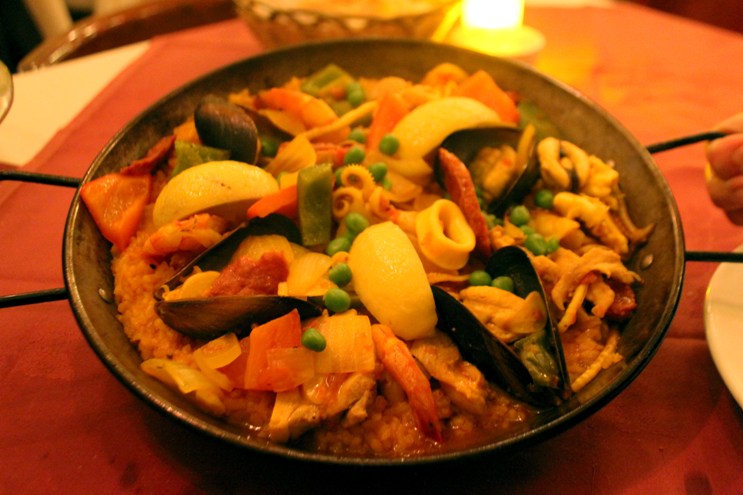 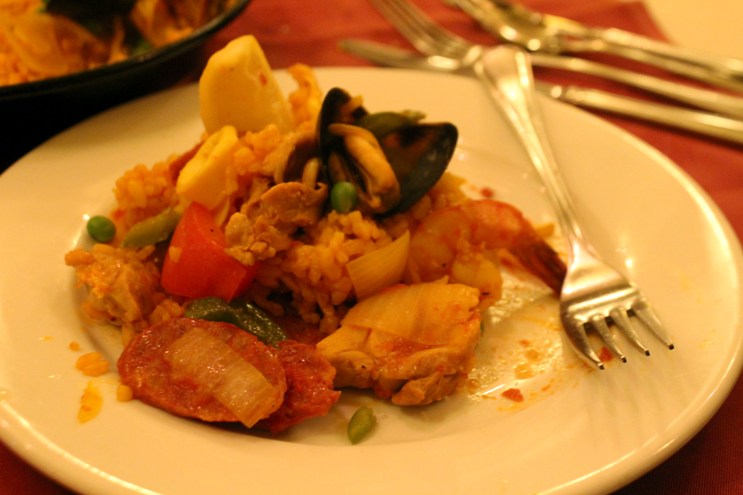 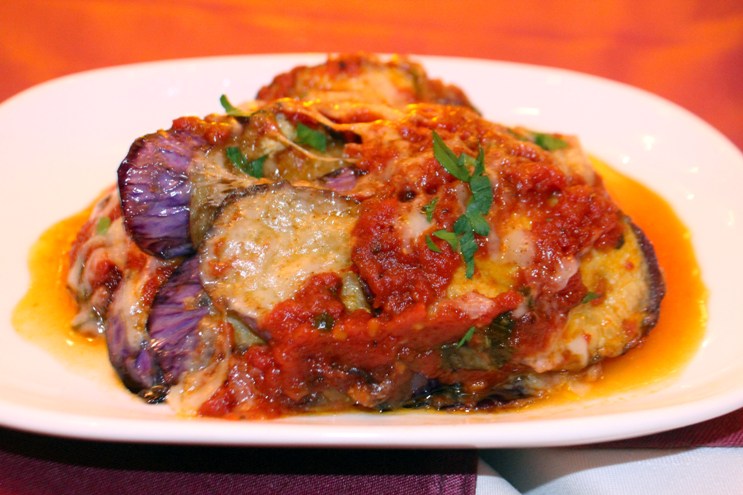 3. BLACK STICKY RICE WITH MANGO AND COCONUT CREAM at So Bali Bali Indonesian Restaurant and Bar, 31 Elgin St, Soho, Central Hong Kong
“Black Sticky Rice with Mango and Cocounut Cream” is a name that can mislead a customer, especially a lover of the renown Thai dessert. One expects the glutinous dome-shaped pile of rice, sweetened by coconut milk and garnished with fruit. This dessert is definitely more on the pudding side, with a moist, almost watery texture. Although black rice has usually a rich, nutty flavor and can be eaten plain, this definitely needs some help from the fruit and the coconut cream. Still, it’s not enough. Had they called it ‘porridge‘ it would have been amazing. 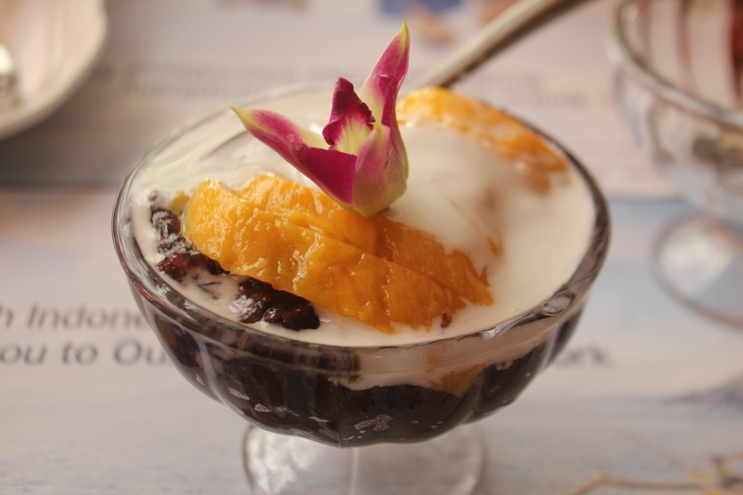 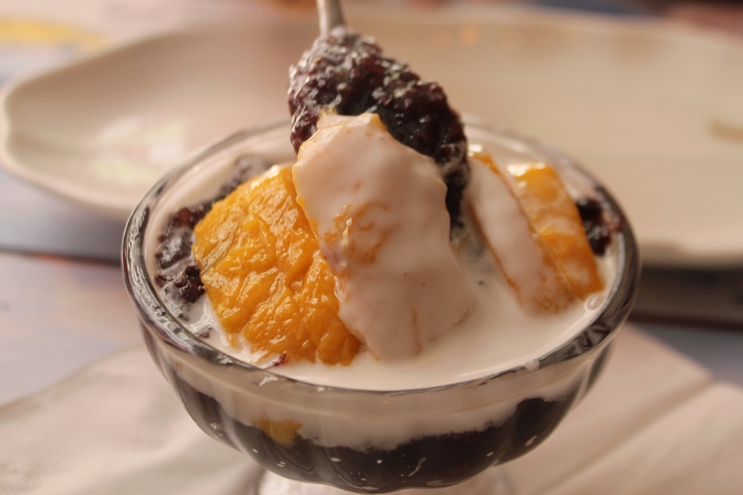 4. MAHI MAHI TACOS at Caramba Mexican Cantina 26-30 Elgin Street, Soho, Central Hong Kong
In the lively environment of this Mexican style eatery, Mahi Mahi tacos shells come filled with lettuce, grated cheese, pico de gallo, refried beans, guacamole and sour cream. The side of black beans and Mexican rice helps attenuating the hotness of the dish. It might not be the best tacos you’ve ever had, but if you need to satisfy a craving, this helps. 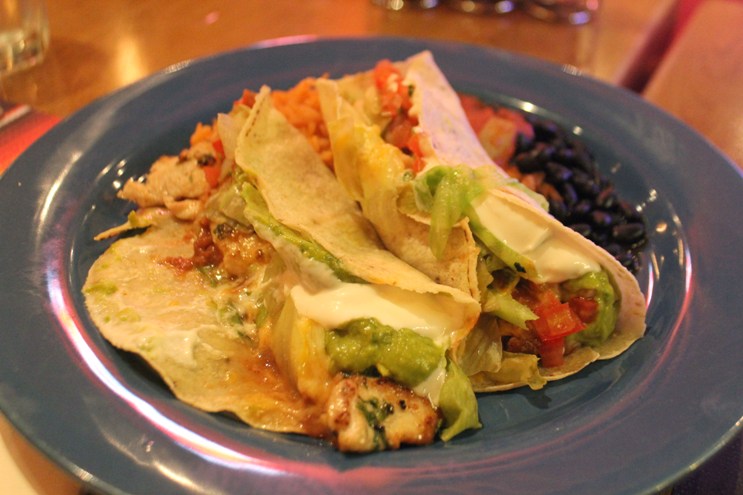 5. PAD THAI FLAT NOODLES at Lil’ Siam Thai Restaurant, 38 Elgin Street, Soho, Central Hong Kong
Pad Thai is a stir-fried rice noodle dish seasoned with eggs, bean sprouts, shrimps, tofu, garnished with crushed peanuts and wrapped in an egg omlette. The pungent zest of the lime and the tamarind juice together with the spiciness of red chilli pepper and coriander create and interesting combination of flavor. Sweet, sour and hot. Love it or hate it! 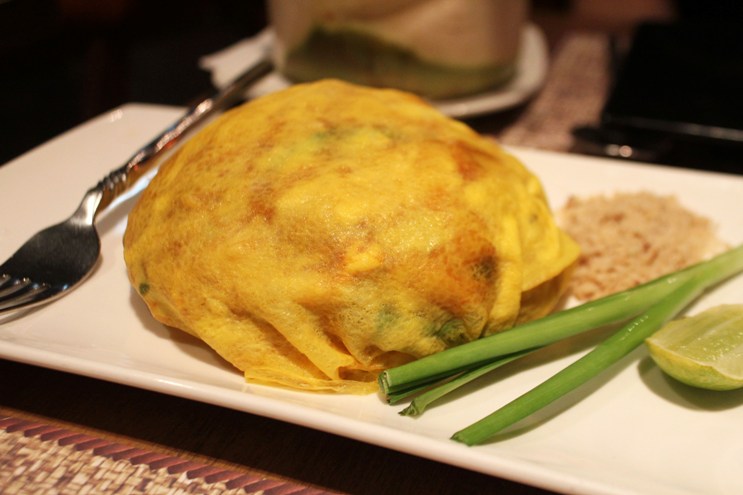 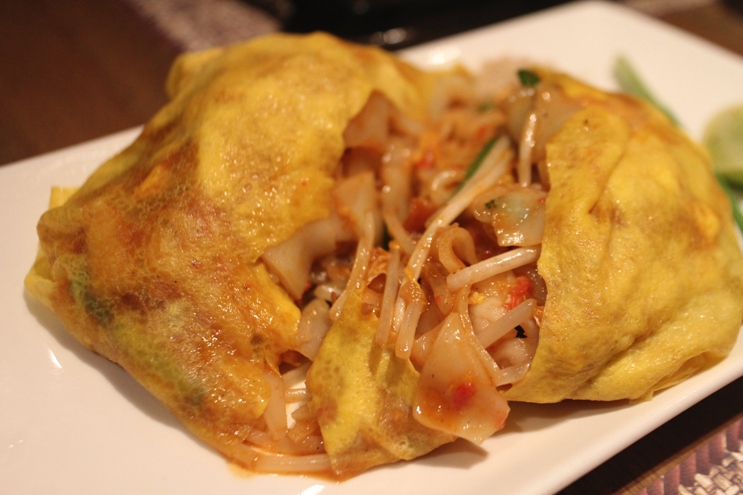 6. DATE AND ALMOND PIE at Ricks Greek Mezze Bar, G/F 51 Elgin Street, Soho, Central Hong Kong
In this traditional Greek Restaurant, decorated with blue and white exterior, one forgets being in Hong Kong and daydream of being in Santorini. All the food is excellent, from the ‘Ora Feta“, a Feta cheese, garlic and sesame dip with hot pita bread, to the Souvlaki platter with beef, lamb and chicken skewers. Their almond paste and date pie, served warm and accompanied by a scoop of with vanilla ice cream and a passion fruit glaze, is the perfect way to finish your meal. The treat is even better if paired with a glass of their home made Sangria. 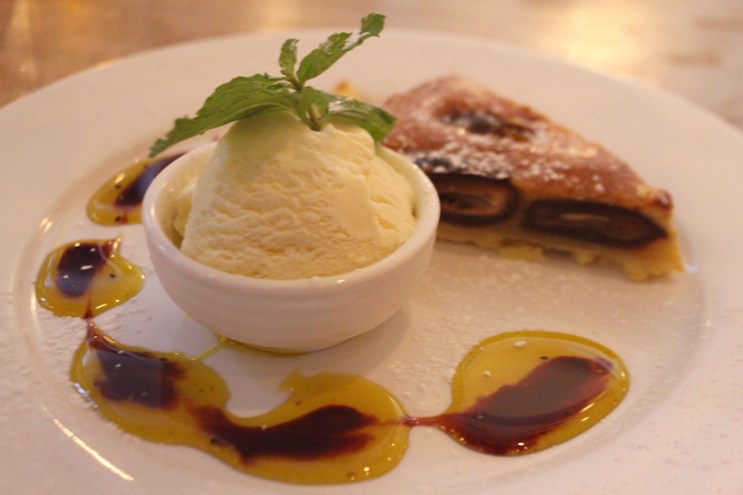 7. ENGLISH BANOFFEE PIE at Enoteca Soho, G/F 47 Elgin Street, Soho, Central Hong Kong
The name ‘Banoffee‘ derives from the combination of the words ‘banana‘ and ‘toffee“. This dessert, made with a crumbled biscuits base topped with a coffee cream, toffee (or dulce de leche) and bananas, is a popular dessert in the United Kingdom. Think about the crispy base of a cheesecake, the frothy cream of a tiramisu’ and the lusciousness of a banana cream pie. In a Banoffee all these sensation are combined together. 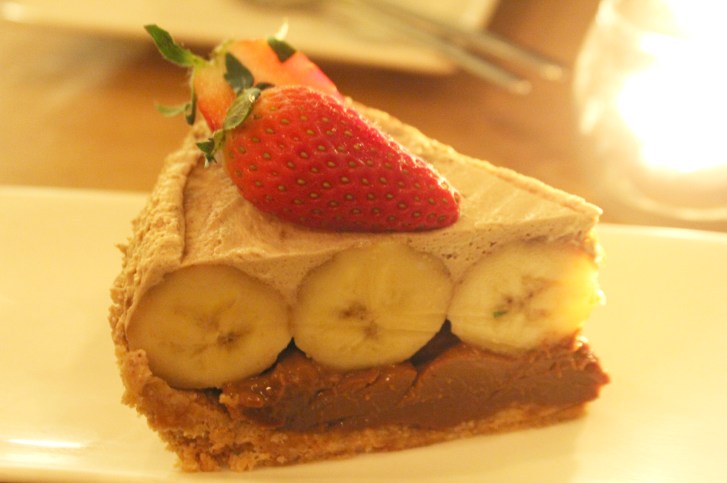 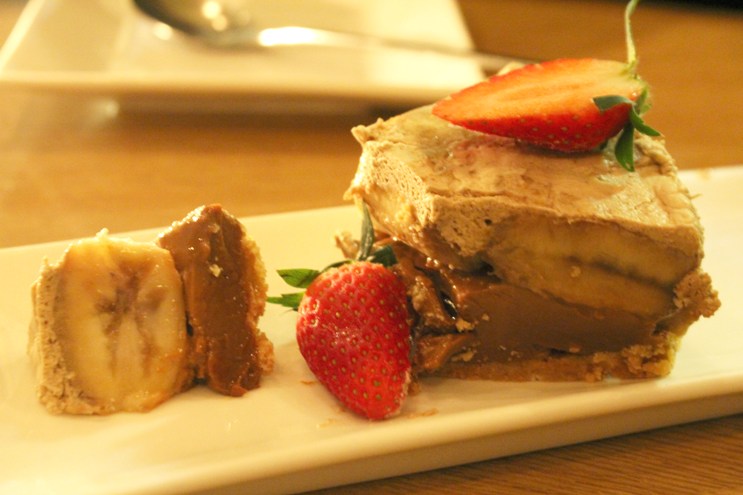 8. MOROCCOAN LAMB TAGINE WITH CUS CUS at Le Souk G/F. 4 Staunton St., Soho, Central Hong Kong
“Tagine” is a Moroccoan clay box where the lamb is slowly braised with potatoes, dried apricots and prunes and glazed Kalamata olives. Together with the cus-cus, delicately seasoned with butter and raisins, these ingredients create a perfect mouthful of flavor. 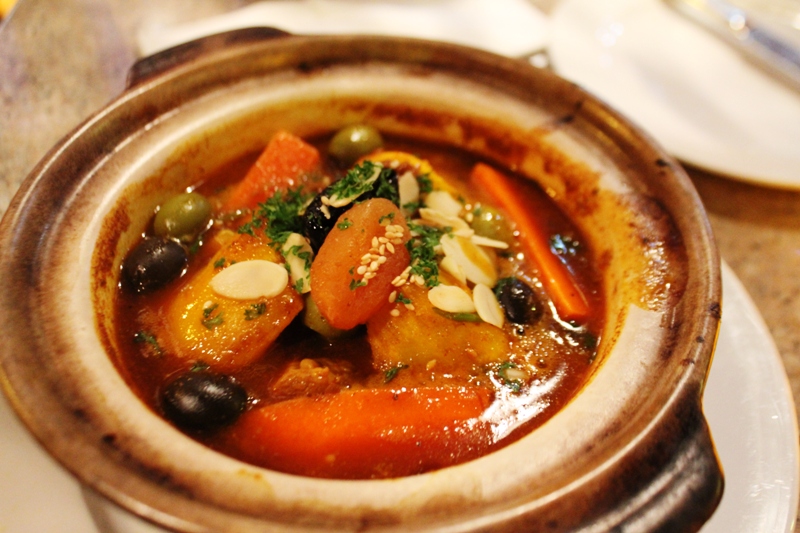 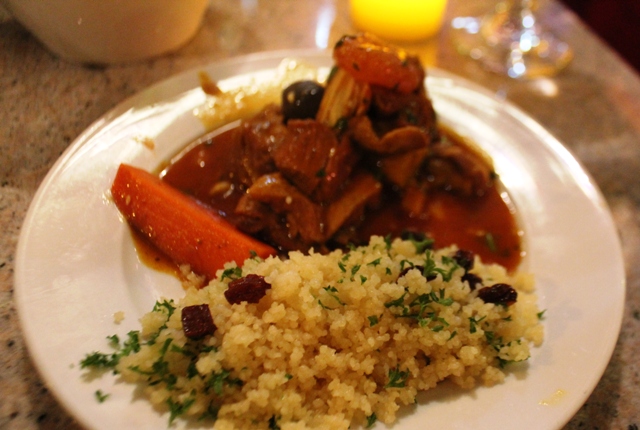