A sweet brown syrup is used to fill small balls of rice flour dough, which are tossed onto a greasy griddle and pressed flat with a circular tool. Flip the thick cakes a few times, and voila, you’re ready to eat the most delicious syrup-filled pancake you’ll ever have in a cup.
By Meagan Mastriani 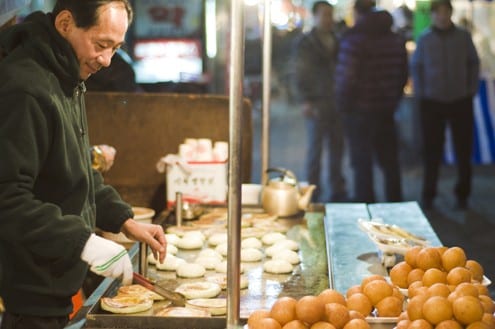 Just a few blocks from my apartment sits Jungang Market, a typical Korean market not much different from the one fellow Honest Cooker Elizabeth Ellory recently encountered. In the warmer months, it’s my one-stop shop for fresh seasonal fruit like strawberries from Nonsan or chameh, the ubiquitous golden melon. But in the winter, there’s only one reason I visit: the street food stands.

My favorite of them all is the ho-ddeok stand at the entrance. It’s the perfect place to indulge in a syrupy winter-time treat to warm you from the inside out. Here, you can get a sticky, sugary, chewy pancake served to you in a paper cup for the bargain price of under 1,000 won (less than $1US). 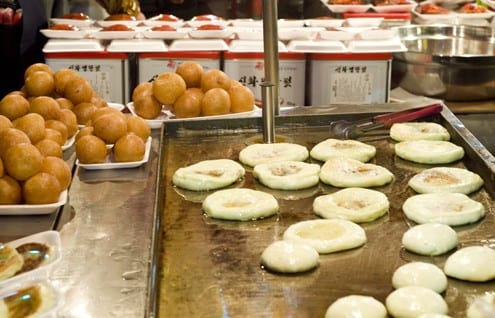 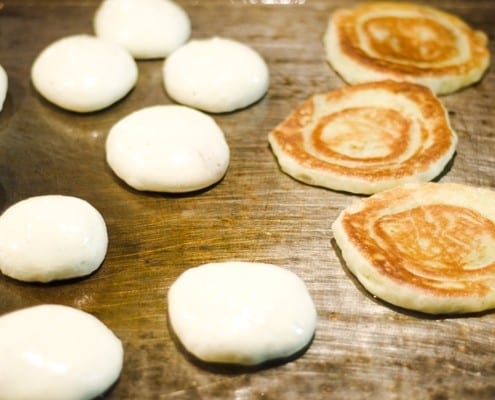 Ho-ddeok is simple enough to make, as you’ll see when the vendor cooks it fresh for you. A sweet brown syrup (usually consisting of brown sugar, honey, cinnamon, and sometimes nuts) is used to fill small balls of rice flour dough, which are tossed onto a greasy griddle and pressed flat with a circular tool. Flip the thick cakes a few times, and voila! You’re ready to eat the most delicious syrup-filled pancake you’ll ever have in a cup. (Just be careful not to spill the syrup on yourself!)

These to-go pancakes are almost sickeningly sweet, and with all that sugar, they can be seriously addictive. You might find yourself craving one every time you pass a ho-ddeok stand (practically unavoidable, especially in popular tourist thoroughfares like Namdaemun, Insadong, and Dongdaemun), but try to remember that this is an indulgence best saved for those moments when you truly need a helping of comfort food. Otherwise, you may end up leaving Korea with a mouth full of cavities. 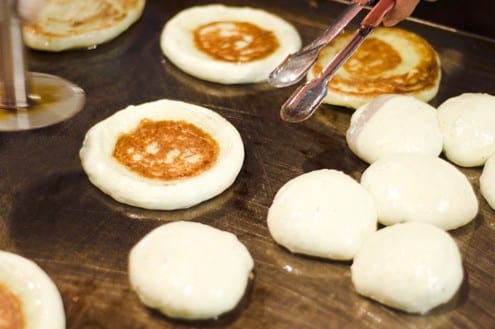 With so many ho-ddeok vendors dotting Seoul’s streets, it’s no surprise that there are several specialty varieties. My ho-ddeok of choice is the green tea kind. Though it retains the bright green color of the tea, it doesn’t taste much like it. Green tea ho-ddeok is simply sweeter than a regular ho-ddeok. Another type, bokbunja ho-ddeok, has black raspberries that give it a pink color. You can also try ho-ddeok with corn flour or ho-ddeok deep-fried in oil (conversely, there’s a fluffy version containing no oil at all).

If you just can’t get enough ho-ddeok, there’s even a savory version you could eat for lunch. It’s filled with japchae, glass noodles and pork. This is probably closest in resemblance to the first ho-ddeok, which are believed to have originated from meat-stuffed pancakes brought by Chinese merchants in the 19th Century (thanks, Wikipedia). 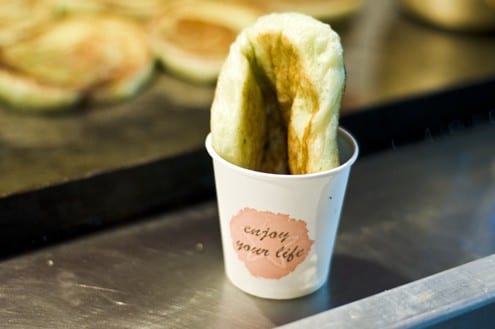 For those who like their snack with a side of intrigue, the gossip surrounding ho-ddeok stands can be as hot as the cakes themselves. Though tourists should have no problems snapping photos, Koreans are sometimes shooed away and told that cameras aren’t allowed. This is due to the fear of a growing citizens’ paparazzi movement that exposes illegal business practices for handsome rewards from the government. Some stands may just not have the proper permits, but it’s rumored that some stands may serve as money laundering fronts for Korean gangsters. But don’t worry — the only danger you face when enjoying ho-ddeok is a potential stomachache from eating too many. 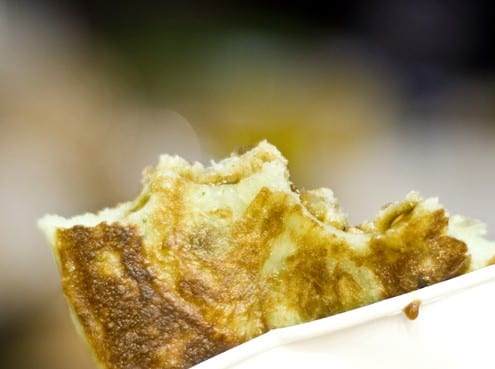 As I’ve mentioned before, food and weather are inextricably linked in Korean culture. Each new season brings its own array of dishes to savor, and winter’s are some of the sweetest. Winter-time street foods like bungeoppang and ho-ddeok are the perfect sugar coating on a harsh few months — they might even be sweet enough to make you look forward to winter. Maybe.