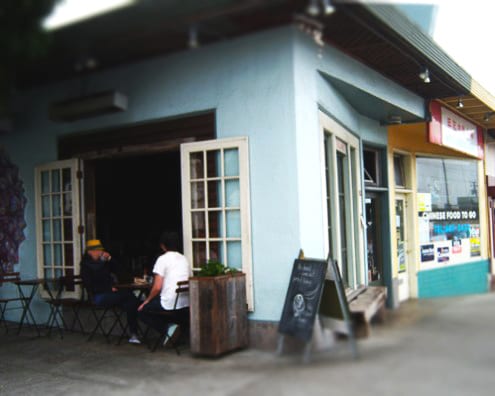 The outer reaches of San Francisco holds a great eatery (for food AND coffee) in Outerlands.
By Bill Walsh

There are few earthly delights that compare to a nice Sunday brunch with the sea air in your nostrils and a good cup of coffee in your hand. Years ago, this could prove to be a tall order purely based on the minimal use of good coffee at brunch spots but slowly, great eateries, both coastal and land-locked are coming round.

Out by San Francisco’s western limits near the sea sits a couple of establishments by the shore, one of them aptly called Outerlands. Specializing in sustainable and organic local fare, their menu has received accolades and the crowds one Sunday afternoon reinforced said claim. There’s a bustling counter amidst the inside and outside seating where folks can gaze at much of the menu, and if you can only stay for a spell, there’s options for a quick bite as well.

Sadly, I was not able to stay for brunch that day (they had stopped seating folks when I arrived) and since the only non-espresso coffee they offered was via large chemex for dine-in customers, I had to settle for (just) an espresso of Sightglass’ Owl Howl. The shots were pulled short, held a brown crema and exuded flavors of 5 spice, lime, kalamata olive and thick black tea. The drink proved delicious and heavy, with a nice balance. The chemex coffee was also Sightglass.

Thus, the only reason Outerlands gets a 5+ is because of my circumstances in not being able to try the a chemex of their non-espresso coffee. Believe me that everything points to a 6+ and I feel a bit silly holding it back but, even though my observation of them brewing and serving it to a nearby table leads me to postulate that they certainly do a bang up job, I must leave them at a 5+ until I have tasted it with my own tongue.

But please, by all means, give Outerlands a try as they seem to have the full-blown midas touch. If you get coffee, let me know how it is in the comments below.