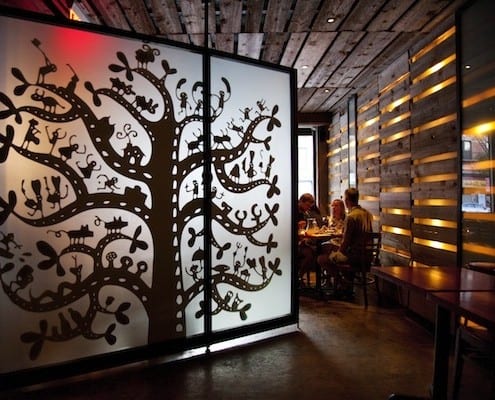 When I lived in Paris, almost all my friends were Basque.  I was addicted to their lively energy, their no-holds-barred humor and their endless appreciation for good food and drink.  At the same time,  “Basque” was becoming one of the hottest buzzwords in cuisine, in large part due to Ferran Adrià and the heavily Michelin-starred city of San Sebastián.  So it was with great anticipation and expectations that I finally visited the Pays Basque myself, an experience that can only be described as exceptional, given the region’s distinctive geographic diversity and resulting wealth of signature foodstuffs.

It’s this Basque commitment to and celebration of locally-sourced, exquisite ingredients that has typically made me skeptical of “Basque” spin-offs in the ‘States.  However, when I heard that an unpretentious, creative and stereotypically hard-to-pronounce Basque outpost had opened in Chelsea, I couldn’t help popping in for a bite.

I first visited Txikito during Cider Week, though the restaurant features the distinctively dry and acidic Basque cider year-round.  The ambiance mirrored that of its pizzeria neighbor, Co Pane, with clean lines and concrete floors.  The interior, in fact, set a precedent that stood throughout the meal: seeming simplicity backed by elevated conception.  Familiar flavors unfurled with new intensity, yet one never overpowered the other.  Odors evoked near-primal pleasure (I literally held the “grilled cheese” to my nose for about a minute before even tasting it).  It was all such an enjoyable blur that didn’t even think to document the experience.  So much the better, since I planned to come back. 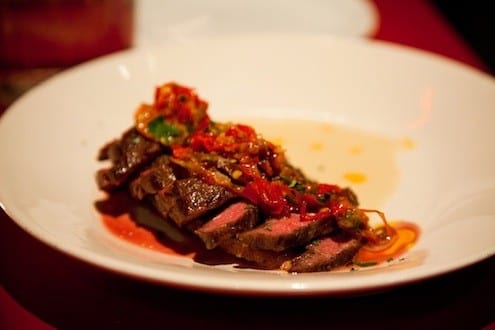 Last week offered the perfect opportunity to return to Txikito,

with one of my favorite dining companions in town.  Despite arriving early on a Monday night, the restaurant was already packed, so we seated ourselves at the small but pleasant bar.  My cohort had already heard me rave about the txixi txanpi (shrimp and wild mushroom grilled cheese), so that was quickly decided upon as our starter.  As previously implied, the odor of these perfectly ridged, miniature sandwiches is truly incomparable, their flavor grounded by earthy mushrooms and balanced by light, slightly sweet shrimp.

From there we chose the esparragos, (white asparagus, celery-black truffle vinaigrette and chopped egg), an elegant, well-balanced dish, though not the most remarkable on the menu. Then came the txipiron “encebollado” (squid ribbons over pine nut/sweet onion puree), a truly masterful display, in which typically chewy squid was transformed into tender, al dente “pasta” served over a mild, nutty-sweet sauce.  Still fawning over the squid, we dove into the albondigas, light and appropriately gamey lamb meatballs nestled in a bowl of savory, just-minty-enough broth (that brought out the best in bread-dunking).  We finished by munching on patatak mentaiko, crispy fries flecked with piment d’espelette and a mildly fishy cod roe mayo.  My companion deemed the fries a “must eat”, fingering them with the delight of a guilty child, a sentiment that reflected the organic, grateful delight that I have experienced with (almost) every bite at Txikito.

If there was one sad moment in this most happy of restaurant reruns, it was the discovery that the pochas (navarran white beans, bouchot mussels, white wine, parsley) were no longer on the menu.  These buttery, melt-in-your-mouth beans, laced with the lingering flavor of shellfish, had evoked a plate-licking urge in me that I had thought long-suppressed.  I can only hope they’ll return next bouchot season. 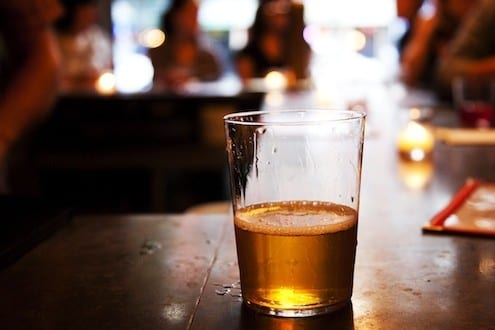 I cannot go so far as to say that every dish at Txikito is a stunner, (the first time I visited, I distinctly remember that the txitxiki (chorizo hash sandwiches) were good, but underwhelming) but any deviations from excellence are quickly forgiven, when one considers the outstanding whole of chef Alex Raij’s work.  Her cuisine demonstrates a keen intuition for balancing flavors, odors and textures, providing the opportunity for both intello-foodie chatter and analysis-free enjoyment.  If the former will fill Txikito’s seats for the moment, the latter will enlist it as a NYC staple for years to come.