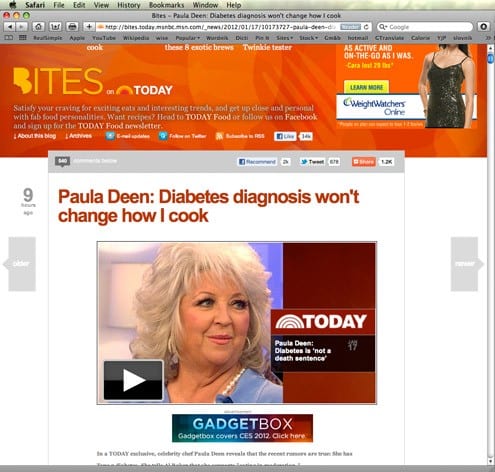 Year of the Dragon and Tet Traditions 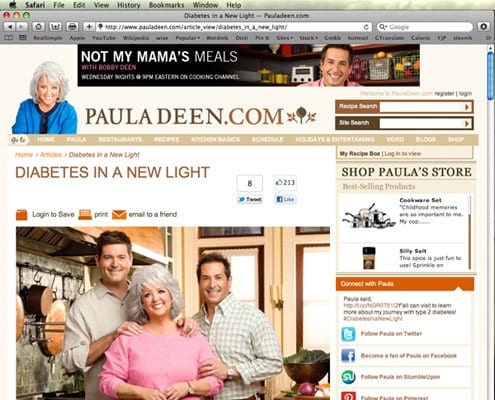 Newspapers, Tv, and social media are ablaze with the news of Paula Deen’s diabetes. If you haven’t heard the news, Deen was diagnosed with Type 2 Diabetes three years ago and kept it from the public all this time. I believe that public personas have just as much right as anyone else to keep their medical issues private. But when said public personas are promoting an unhealthy lifestyle that could very well lead to a disease, or even worse have seen the results firsthand of such a lifestyle, all while profiting is just morally wrong.

Admittedly I have been pretty neutral on Paula Deen. I don’t watch her show, read her site or buy her products. Her recipes are not ones that appeal to me or ones I would cook for my loved ones, too unhealthy for me. I wouldn’t call myself a fan but I do admire her story, accomplishments and charm. She seems like a nice enough person.

However, I do have to question her motives for not coming forward with this information sooner. The highly profitable empire Paula has built for herself is no secret. Such an empire and wealth could be tough to sacrifice or let slip right out of your hands (especially when you have built if from poverty). Right? At the same time how can one live with such hypocrisy? Let alone the knowledge that the very thing you are promoting, all with a huge smile, is leading to bad health for an already unhealthy society. Could it all really be about the most obvious reason, money? Money can make people do funny things.

Let’s address those obvious reasons. Coming out and telling people, Hey y’all, you know that unhealthy food I have been showing you how to cook? Well, turns out it is really bad for you. And guess what?, I now have Type 2 Diabetes because of my unhealthy lifestyle. That could lead to a drop in ratings, drop in product sales and the tarnish of the Paula Deen name brand. All equating to drop in profits and not a good thing for any business person. So perhaps keeping it a secret is best, huh?

On Paula Deen’s website is a letter to her fans addressing the Diabetes issue. Her attitude of not letting the disease control her life is great. But honestly the short message was not enough. Instead it was used to promote her new “Diabetes in a New Light” website, where she will be adding “a little bit of a lighter touch” to some of her recipes. Once you land on her new website you get greeted with a video message from Paula. The video is disappointing. Instead of really addressing the issue she is promoting her new joint venture with a pharmaceutical company.

So let’s get this straight, for three years she continued to promote that horribly unhealthy lifestyle all while making sure people bought her products and watched her on television. Had she come out with this news three years ago it would have meant three years of lost profits. So conveniently three years after the diagnosis she has a whole new website, line of recipes and teamed up with a very profitable healthcare corporation. Which did I mention is one of the drug companies that makes Diabetes drugs? Go to the drug’s website and there she is, Paula, helping promote the drug. But of course Paula isn’t going to work for free, you better believe that joint venture is bringing in a whole lot of money for the Paula Deen brand.

Paula recently told the Today show and PEOPLE the following, “I could’ve walked out and said, ‘Hey y’all, I have been diagnosed with Type 2 Diabetes,’ and walked away,” “But having given myself time to work with my family, talk with my family, now I feel like I have something to bring to the table.” Yeah. Money. And lots of it.

On her Today show appearance she was also joined by a Dr. whom said the following, “…being overweight in particular is probably the most define risk factor for Diabetes?” Last time I checked Paula is known for her fatty, high caloric recipes, which lead to weight gain. When asked if she would change the way she cooks and eats, she didn’t give a clear cut answer. She instead stated that she has always said to “eat in moderation…I’ve always eaten in moderation.” But even for people suffering from certain diseases moderation can lead to bad results in the end. Besides promoting things such as “Everything’s Better with Bacon” and “Everything’s Better with Butter” is not moderation. Perhaps the constant promotion of her new venture, which will lead to new profits, should have been in moderation.

Keeping health risks and results, of the unhealthy food she promotes, from her fans and other people while profiting is wrong. It is a message of , it is okay to profit as much as possible and if you’re irresponsible along the way, well that’s just fine. Uhm, hello! Normal everyday people look to and up to public personas to guide them or inspire their lives. Teaming up with a Diabetes drug and not coming out, straightforwardly, telling people that it isn’t just a matter of taking your pill and “moderation” is the wrong message. Moderation and pill popping does not equal a cure (Diabetes runs in my family so I understand “moderation” and pills are not the solution). It is much more complicated and individually based than that.

I haven’t had a face to face conversation with Paula Deen, and only she knows the wholehearted truth of why the revelation of her diagnosis has been handled the way it has been. No one is perfect, we all make mistakes, but people should also be held responsible for their actions. Paula isn’t herself putting sticks of butter into people’s mouths. Nor is she personally responsible for people’s food choices. It is not my business or concern that Paula or any other human being chooses to eat fatty or what I may consider unhealthy foods. The choice is theirs and theirs alone. The problem with this whole scandal is profit. For three years Paula was well aware that her “product” caused her Diabetes, and instead of being honest with people she chose profit. In her video message she also states that she will be there for her fans suffering from Diabetes. Well, where was she the past 3 years? Oh yeah, cashing those checks. It isn’t a matter of so called food elitists “out to bash” Paula for eating loads of butter and sugar it is a matter of those three years of profit.

Call me cynical but it is pretty hard to ignore how this whole perfectly orchestrated campaign has transpired. Only time will tell if Paula, all while rolling in her money, will actually do something good to bring awareness to a healthier lifestyle and a growing Diabetes epidemic. Here’s hoping she does.