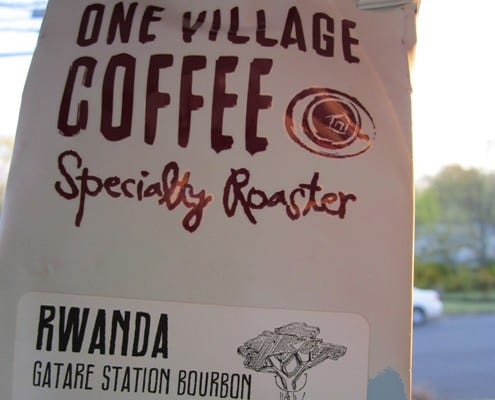 Despite living and frequently traveling around the Philadelphia area, I’ve had surprisingly few dealings with One Village Coffee. Based out of Souderton north of the city, One Village has often served up decent beans in the times I’ve found them. Hence when an opportunity recently presented itself to sample their wares at home, I jumped at the chance.

The first of the two coffees sent was their Rwanda Gatare Station Bourbon, a light roasted, wet-processed coffee that I sampled by pourover, siphon and french press infusions.

The drip produced a brew that poured out a mild strawberry milkshake, Nesquick, some hay, corn chip, black tea and deep cherry on the back end. The resulting coffee was a flavorful yet mellow brew.

The french press demonstrated strawberry, wheat, a bit of cream and a nice tang of lemon. The brightest of the three cups, this infusion also held the least nuance.

The siphon rallied with more of a honey sweetness as well as heavy notes of cream, bran and twigs, along with flecks of sesame seed, well done steak and scotch amidst a medium body. A much more pungent concoction with a few odd notes, but overall still tasty.

To concisely put it, this Rwandan offered a smooth coffee that held my interest throughout. Give this Rwandan a go if you can get your mitts on it.

note: coffee was provided free of charge and the above review is objective feedback.

Nitrogen Ice Cream in Bangkok - When Science Meets the Kitchen