This dessert is all about experiencing the simplicity of milk and honey in a different form. My twist on Daniel Humm’s Milk and Honey ice cream keeps true to his flavors, but is easy and approachable enough for anyone to make. 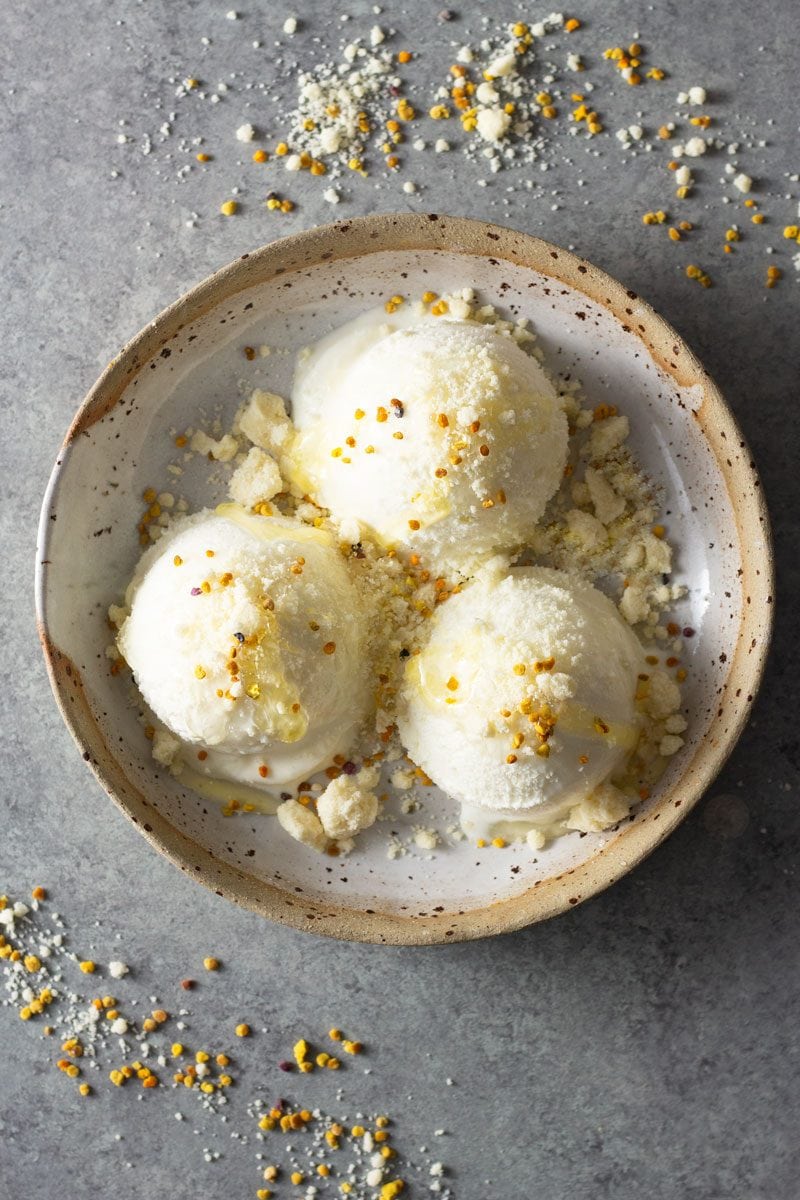 If you don’t know Daniel Humm, he’s the chef owner of New York City’s Eleven Madison Park and The NoMad. EMP was actually named World’s Best Restaurant in 2017. That’s a big deal folks. The menu is amazingly inventive, and each plate is truly a work of art. Oh, and it tastes good too. Everything I was able to sample from EMP was incredibly delicious. The chefs stick to motto “Make It Nice” and they do just that. EMP had one of the cleanest, well-organized kitchens I’ve ever seen. I definitely give them props.

Now, don’t be mistaken. I can’t exactly afford to casually eat at EMP, but I did have the opportunity to work with the kitchen staff. When I was employed by a food photographer, we made several trips there to work on a cookbook. No surprise, my creation here is modeled after one of the desserts they served us. 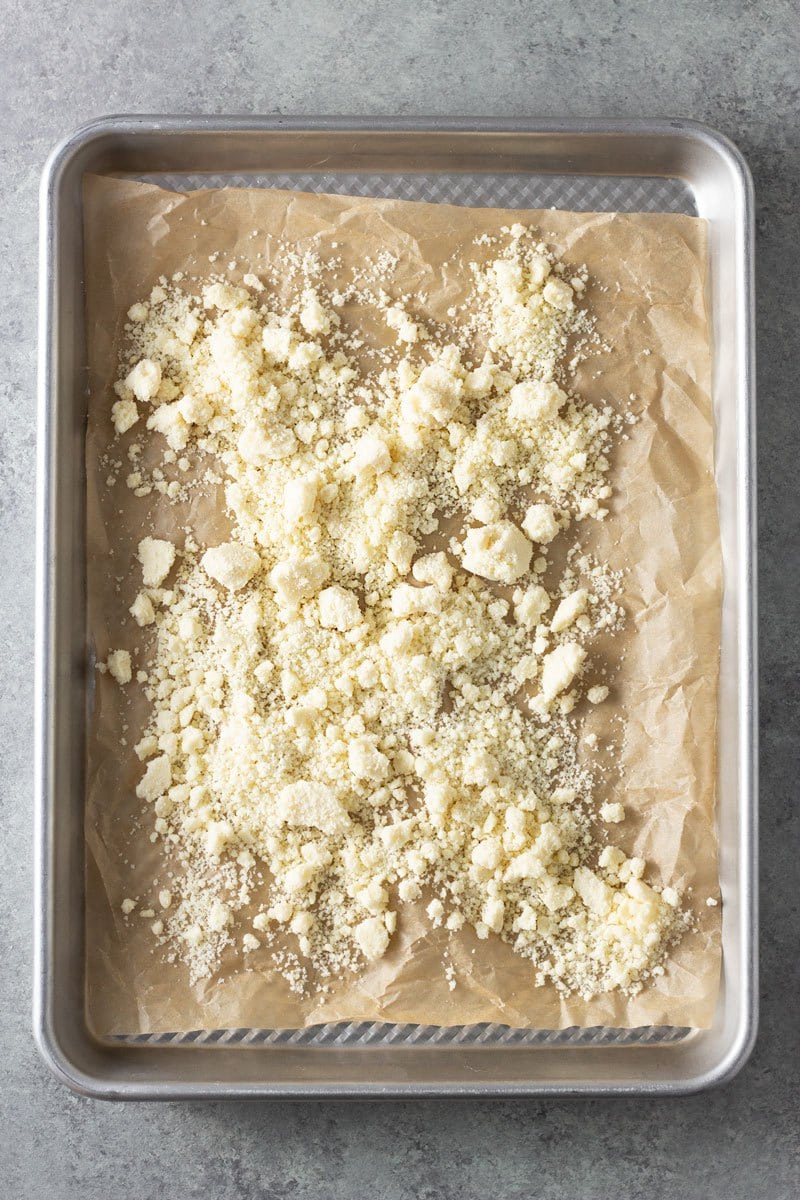 I actually made this ice cream many times. At least a dozen. My boss fell in love with it, so we started serving it to clients at the studio. Daniel Humm’s inspiration for this dessert was a glass of warm milk sweetened with honey that he used to enjoy as growing up. Let me explain how the dessert was made at EMP. This milk-forward ice cream, or Milk Ice as Humm calls it, is topped with sheets of dehydrated milk foam and beads of bee pollen. It looks a bit like a snowy mountain. Inside there’s a surprise waiting. A ball of honey is encapsulated within the ice cream, and at the first spoonful it erupts and oozes down the plate.

From my understanding (correct me if I’m wrong), this dessert was first served at The NoMad. The recipe is in the NoMad cookbook. It looked different and there was some sort of oat crumble involved. I’m sure that was great too. Now there was no oat crumble or bee pollen at my studio, but we served the ice cream and dehydrated milk foam true to recipe. 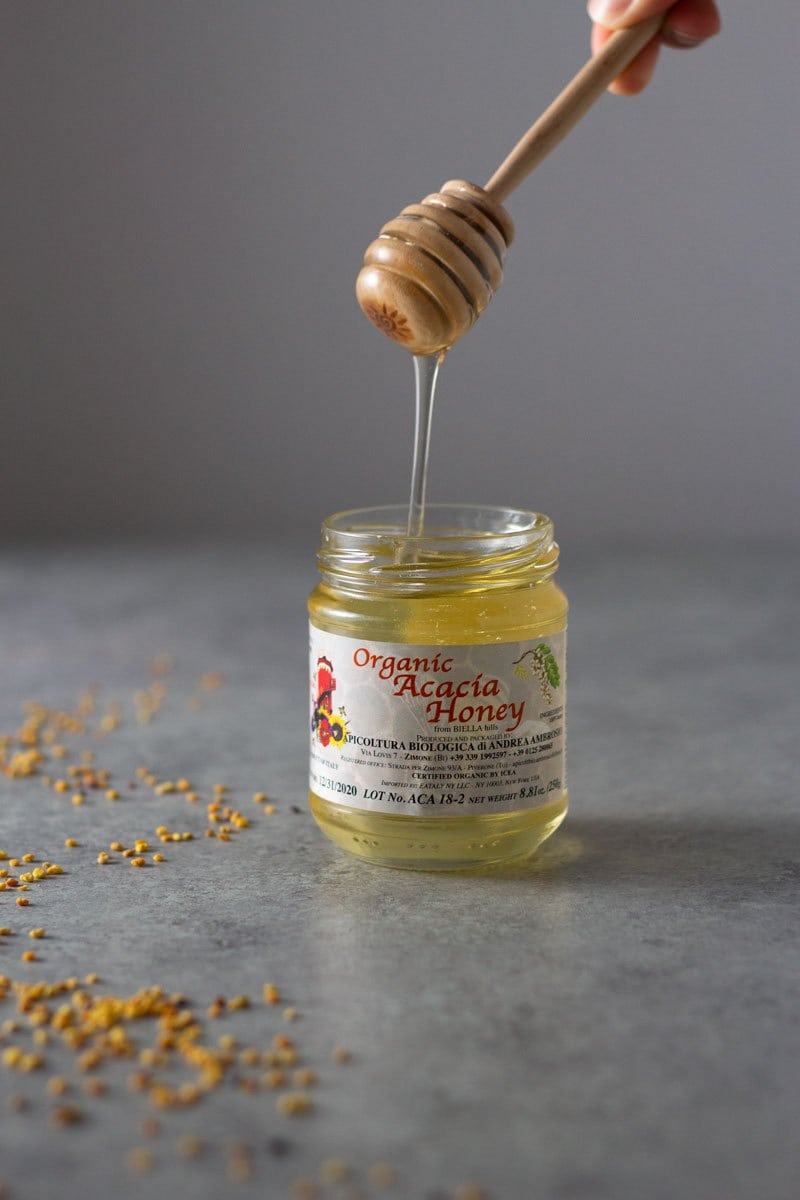 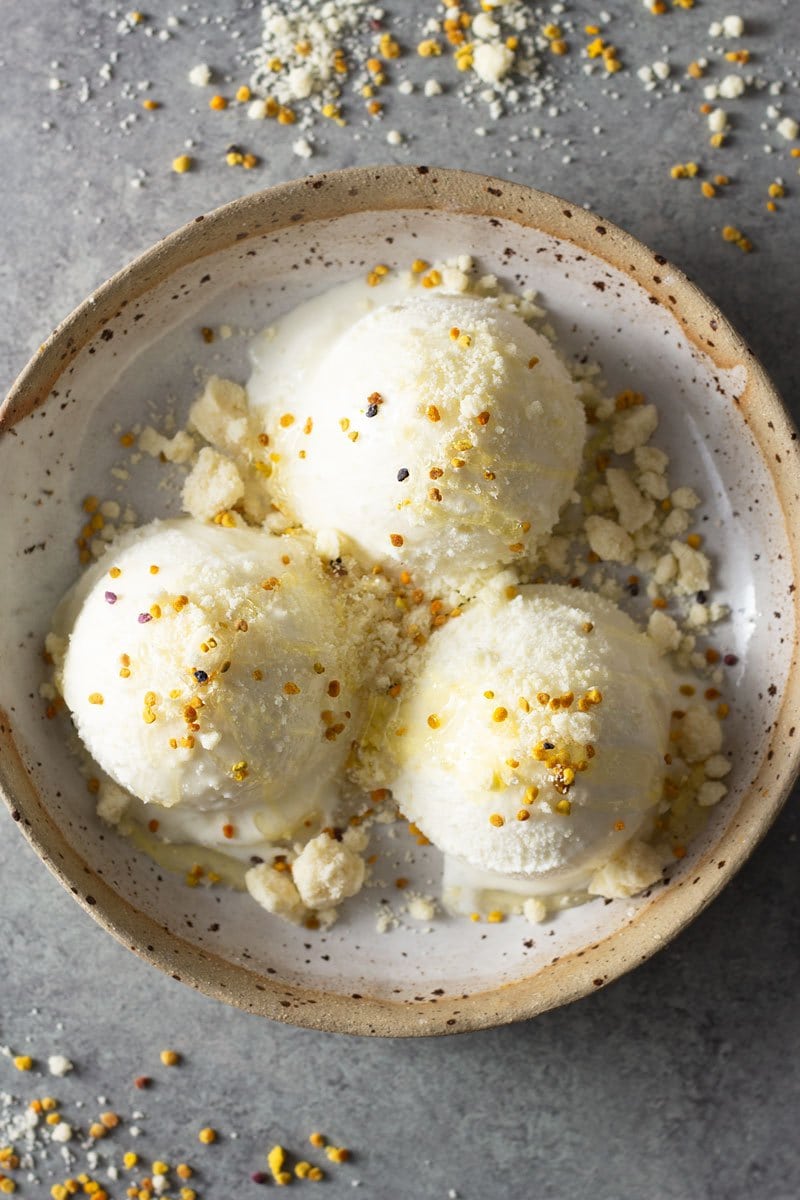 Milk flavored ice cream sounds silly. I know. Just give me a chance to convince you otherwise. So for one, there’s a higher ratio of milk to cream in this recipe than in a typical ice cream. Secondly, there are no eggs. Not only does that make this ice cream that much easier to whip up, but the pure milk flavor really shines too. To concentrate that milk flavor, you first reduce some of the milk by half. It becomes a homemade condensed milk of sorts. There’s also a hefty amount of dry milk powder in this base. Another unusual ingredient in this recipe is light corn syrup. I believe EMP uses glucose syrup, but I’m pretty sure they don’t sell that at the grocery stores. The liquid sugar gives the ice cream a creamier texture. The results is a luscious ice cream with an intense milk flavor and a little “toastiness” in the background. The “toastiness” might be from me nearly scorching the milk every time I reduce it, but hey, it works.

Now, dehydrated milk foam hasn’t made it to many people’s dinner tables, so I should probably explain what that’s all about, and why I opted for a different topping. The dehydrated milk foam is made by warming lightly sweetened milk, and foaming it with an immersion blender. The foam is then transferred to a baking sheet and dehydrated for a number of hours in a low temperature oven until it is completely dried out. EMP bakes the foam on a stabilizer (some kind of acetate) to prevent the foam from falling. It provides great texture to the dish and is very interesting to enjoy that milk flavor in two different forms. I made this foam many times and was able to get great results after some trial and error, but it was not very easy. It also takes a long time to dehydrate. I’m not usually about shortcuts, but I thought a simple topping would be more welcomed here.

On an episode of The Chew this summer, I saw Clinton Kelly make a milk crumble just like this. I was for some reason unable to find his recipe, but found something similar from Bon Appetit, which I adapted here. The ingredients to the crumble are flour, cornstarch, dehydrated milk powder, sugar, salt and butter. The crumble is incredibly unique, salty and slightly sweet, and perfectly mimics the ice cream flavor, while providing contrasting texture.

I wasn’t going to attempt to encapsulate honey in a ball, so I just drizzled some straight on top. Acacia honey became one of my favorites, and really works well in this dessert. It’s mild tasting yet very floral. If you can’t find acacia at your local market, I included a link above. Otherwise, an orange blossom honey or other light honey could work here too. The bee pollen is mostly just for looks, so that topping is completely optional. Milk and Honey ice cream might never make it to Breyer’s, but it’s definitely a unique, delicious experience worth trying. 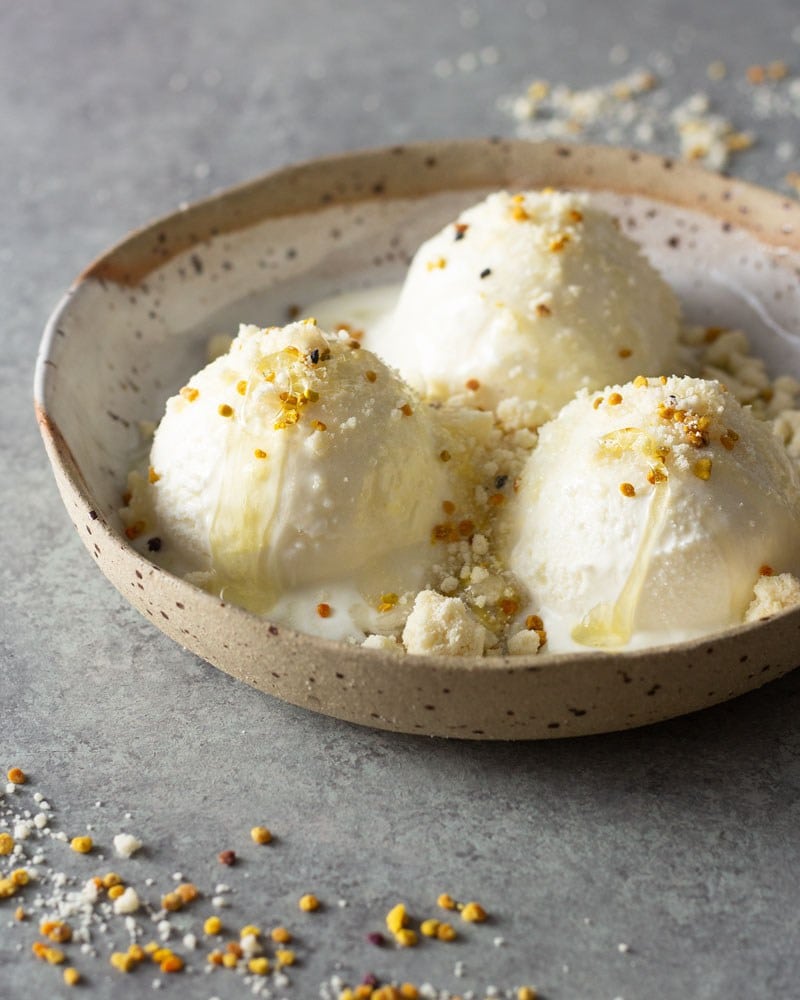 Sweet Recipes for Your Halloween Festivities