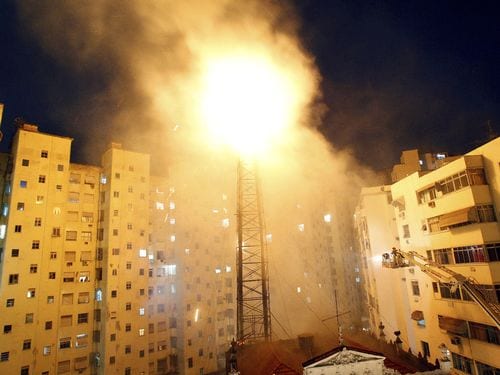 One of the most legendary churrascarias in Rio De Janeiro was partially destroyed last week.
By Suzie Castello

The landmark churrascaria Majorica in Rio de Janeiro was partially destroyed last week. The newspaper O Globo reported that several streets of the surrounding Flamengo neighborhood were closed during the early hours on Tuesday while firefighters fought to contain the fire blamed on an electric grill accidentally left on by employees.

During its 50 years, Majorica served a traditional churrasco menu never bending to trends, such as the salad or sushi bars, or even the all-you-can-eat format that diluted the menus of so many churrascarias over the years. Stepping into Majorica was stepping back in time when meat and potatoes, carved wood and red vinyl ruled.  The quality of the meat at Majorica was considered a benchmark.  The farofa with eggs had more eggs than farofa.  And the soufléed potatoes were considered legendary.

“It was the kind of place where on a Saturday or Sunday you’d see whole families at a big table, the grandparents giving the kids presents or celebrating an important day,” said Alex Costa, an attorney in Rio de Janeiro, who remembers going to the original Majorica in nearby Nova Friburgo with his grandparents.  “I remember them bringing sausages to the table, all on one skewer grilled to perfection. The last time I ate at the one in Rio was when my God-son was born.  It’s was a very special place.”

While waiting for Majorica to rise from the ashes, fans can still visit its last remaining restaurant in Petropolis 65km outside Rio de Janeiro.