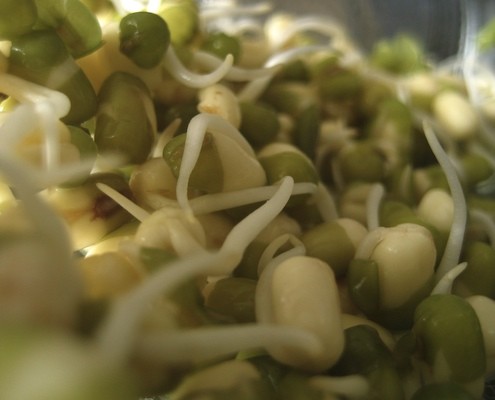 The food industry and the IAEA wants to prevent more people from dying of food related diseases by using radioactive materials to clean our produce. Kalle Bergman is confused.
By Kalle Bergman

This time – in Germany – it was bean sprouts. I won’t claim to know a lot about the German bean sprout industry, but what I find interesting (or should I say scary) is that the EHEC outbreak has not really given birth to any serious discussion on what is causing these diseases in the first place. Instead the debate is focused on how to prevent humans from dying next time around.

Now don’t get me wrong. I’m all for preventing humans from dying. But some scientists argue that since industrial farming create so much waste, there is desperate need for new technologies to help clean bacteria from our food before it’s sold to and consumed by people like you and me. And, this is where I’m lost in translation. The industry apparently doesn’t care about the original problem – the fact that modern growing methods seriously pollute and damage both the environment and the food we eat – and sets out to change that. Instead they work their well educated asses off to find new technologies that can save us from the horrors they are serving us on a daily basis. It’s like instead of trying to make nuclear plants safer, we decide to buy really good nuclear protection suits for everyone.

And it is actually very nuclear. The last few weeks voices have been raised to approve the use of radiation to clean away the bacteria (called irradiation) in the EU. The IAEA people are seriously promoting sterilizing food with radioactive cobalt 60 or caesium 137, which supposedly kills off bacteria in a “safe” way (the technology has been legal in the US since 2006). Am I the only one who is not only scared – but confused as to why the solution to the problem isn’t to not cause the problem in the first place?

It’s the same in animal breeding. The industry’s solution to the fact that animal “production” (we don’t actually breed animals anymore) is polluting our world and subsequently ourselves, is not to start breeding healthy animals in a healthy environment. No, that’s way too expensive. The solution is to keep producing sick animals, but medicate the hell out of them. And then we eat them. It’s cheaper that way, so therefore it must be better. And when the next disease hits, we’ll just find some other chemical, medication or magical ray of light to prevent that particular disease from killing more people. Until the next one appears.

Naturally, there is another way. We can produce meat and vegetables that don’t kill our earth or ourselves, and still feed all of us. But that includes a shift in attitude that needs to start with us – the consumers. We need to start looking at what we put in our shopping baskets every day. Do we need very very cheap meat every day of the week, or can we cut down and eat less meat but better meat? Do we need fruit that isn’t in season every day, or can we adjust our diets according to what grows naturally in our region? Do we need to buy huge amounts of cheap produce and prefabricated food, or can we shop fewer and better things – and cook them ourselves?

In the end, it’s all up to us. Because the industry won’t do it for us. Their supreme argument is always that the consumers want it. And they’re absolutely right. As long as we – the consumers – don’t mind the occasional E-coli death or having our spinach nuked before we eat it, there will be no change. If the price of food is the only thing we care about, the quality of food will never improve.

So the question is if our own health really is a fair price to pay for a cheap cut of chicken?

Up Your Apple I.Q. with Northern Spy

Red Bull May Give You Wings, But Is It Safe to Fly? A Look at What Energy Drinks Really Are

Harvesting, Coffee and Cooking – All in One Day