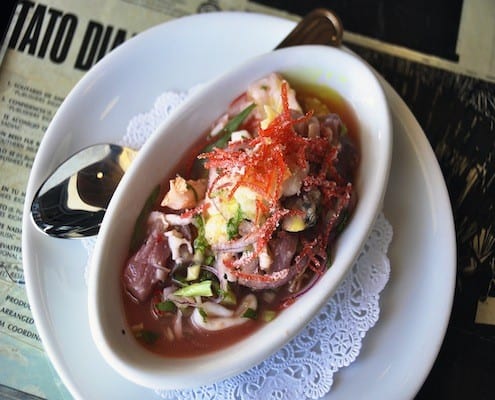 What is Nuevo Latino style food anyway? They are dishes from Mexico, Spanish speaking Caribbean and South America countries but with a special twist. The food still preserves the flavor and soul of the original recipes but always with a creative spin added by the Chef.

De Rodriguez Cuba was created by Chef Douglas Rodriguez who is putting a “spin and a twist” on Cuban Cuisine. He uses local, sustainable ingredients in order to delight our senses: he is called the “Godfather of Nuevo Latino” cuisine and is a pioneer in the culinary scene in Miami.

We started with a Mixed Seafood Ceviche: shrimp, lobster, clams, calamari and other fruits of the sea swimming in a lake of grapefruit juice. This was really refreshing, a taste of the sea in each spoon. The best part I thought, was the addition of tarragon, not an ingredient usually used in a ceviche and a flavor that really flabbergasted Miss G. and myself. I wanted to pick up the plate to drink the grapefruit juice, but that would have been too rude…

Next we had the Smoked Marlin Tacos. This is the most popular appetizer on the menu and with good reason: these are super-charged fish tacos in a malanga shell. Marlin are fish with an elongated body and a spear-like snout, very impressive looking. Marlin are rarely table fare, appearing mostly in fine restaurants so this was a treat for us. Malanga is a root vegetable popular in the tropics and South America. This combination of ingredients was stellar even though they were a little messy to eat as the malanga shell kept breaking in our hands. The flavor was worth the mess though.

Sugar Cane Tuna was a dish after my heart. Slices of smoked tuna were impaled with tiny sticks of sugar cane. I like my fish almost raw, but Miss G. ordered hers well done. The tuna was coated with a mixture of spices that was intriguing, interesting, well balanced and smoky. The surprise was the mashed potatoes: served with a squid ink sauce and topped with Catalan spinach with raisin and pine nuts added to the mix. Wow, what an explosion of flavor.

This dish was lovely but it did take a long time to arrive at the table. I figured they went fishing for the tuna in the Atlantic Ocean right before serving it to us.

Their version of Key Lime Pie was a non-traditional take on this ubiquitous dessert, which is served almost everywhere in Florida. Key limes are valued for their unique flavor compared to other limes, with the key lime usually having a more tart and bitter flavor. The name comes from its association with the Florida Keys, where it is best known as the flavoring ingredient in Key lime pie. This version of the Key lime pie came shaped like a stick of butter and coated with crumbs. Sitting on the pie, was a ball of dense and rich coconut sorbet. It was a good-looking dessert but I was not quite thrilled about the overall flavor as I was overwhelmed by its sweetness.

De Rodriguez Cuba’s vibe was really cool and relaxed offering indoor and outdoor seating right next to a swimming pool. This is a nice place to chill and take in the smell of the ocean. The Nuevo Latino fare offered has a taste that lingers in your mind way after you leave the restaurant.

They have an awesome daily Happy Hour with cocktails that are $5 each and an amazing array of tapas from fried pork belly (chicharrón), curried almonds and Cuban Sandwiches cubes. The cocktail of choice is the Mojito, which is a traditional Cuban highball.

They also have an event every Wednesday called “The Pig is Roasting on Wednesdays” with music, tapas, mojitos and a whole pig roasting right in front of your eyes…got to love them for that alone.

Inside the Hilton Bentley/South Beach Hotel

How to Make Cuban Bacalao