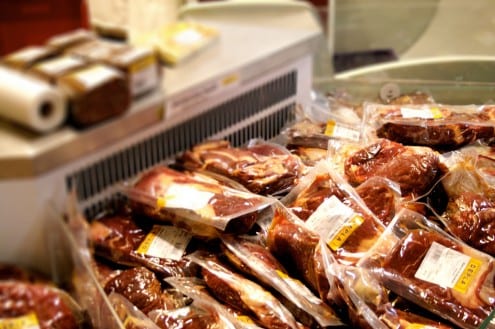 One of my most memorable culinary experiences occurred while living in Belgium for a year. I enrolled in a community education Dutch course early on, but endured many humbling experiences before I had a handle on the most basic phrases.

My everyday interactions at the market were awkward and sometimes even stressful as I struggled at first with even basic communication. Once, I returned home from the grocery store in tears after the clerk expressed clear annoyance at me for something I couldn’t understand.

As most expatriates can attest, not comprehending a language can result in some silly mistakes. I was chastised for parking my bike right in front of a sign that said “no bike parking” (in Dutch), I bought buttermilk instead of milk and calcium remover instead of dishwasher detergent. It took me a week to figure out why our dishes weren’t getting clean!

But the biggest faux pas by far occurred when I went to the meat market without my dictionary. I had looked up the words for different cuts of beef before leaving the house, but when I got to the market I noticed that there was a special on a particular cut that I didn’t recognize. The blackboard said something about “Texas” and so I assumed that it was a flank steak of some sort. I was craving red meat, and so this seemed perfect. Plus, everyone around me was quickly buying up this particular cut, and so I figured it must be good.

It was good. I prepared the steak using a tasty Cook’s Illustrated mole marinade recipe. My partner and I both thoroughly enjoyed it. We oohed and ahhed over how delicious it was.

A few days later when I was consulting a Dutch grammar book, I noticed that unfamiliar word again—“paard.” What I bought from the butcher was “paardenfillet.” This time, the English definition was spelled out underneath, and I found out that “paard” is “horse!”

I screamed. My partner ran into the room to see find out what was wrong. I pointed to the word. Our shared horror turned into hysterical laughter at my mistake. Later, when he relayed the story to his Belgian co-workers, they didn’t get the joke.

Our slightly horrifying (and also darkly comedic) discovery was based on American food culture. Even though we have the expression, “I’m so hungry I could eat a horse,” none of us plan to do so. We grew up seeing horses portrayed as companions or pets — think “My Little Pony” and “Black Beauty”— or even humanized in television shows like “Mr. Ed.” Us Americans rarely have an emotional connection to our food, which is why we find the idea of actually eating a horse disgusting.

Belgians don’t romanticize horses. They have a long history of horse trading, the well-known Brabant horse hails from Belgium. This sturdy breed served as a work horse in the fields of Flanders. And when the horses got too old to work, they were slaughtered for food. Hence, a lasting tradition of horse eating began.

If you think about it, it is strange to make a moral distinction between eating one animal and not another. Horse-meat is leaner and has a higher iron content than beef. Still, I’m not sure I’ll be able to knowingly eat paard again. Some cultural taboos are very well ingrained!