Sponsored Post: #EnjoyItsFromEurope This post is brought to you by Jambon de Bayonne aka Bayonne Ham, the melt-in-your-mouth charcuterie from Europe. You’ve probably tried cured ham before, but have you had French Bayonne ham? Be sure to enter for a chance to win Bayonne ham here.
Whether you’re hosting a brunch with friends or just want to whip up something special for family breakfast this weekend, this Bayonne Ham and Cheese Strata is just the dish you need in your repertoire. 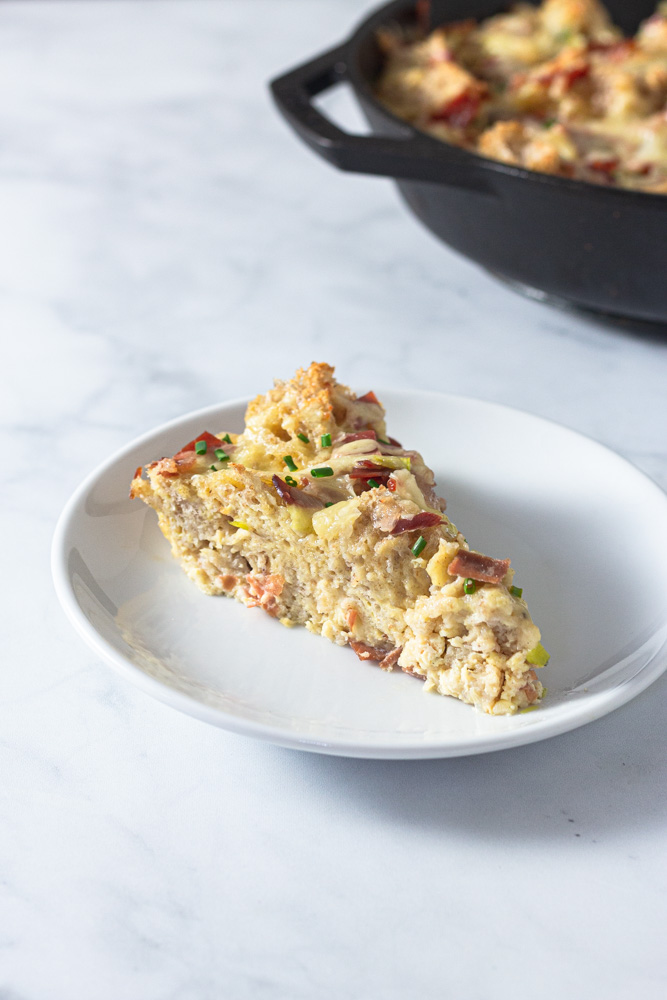 A strata is an American breakfast casserole consisting of bread and an egg and milk mixture that bakes to a quiche-like consistency. The star ingredient in my strata is certainly the ham. I’m using high quality Bayonne Ham which is a cured French-style product, similar to prosciutto.

If you’re a fan of prosciutto, you’ll love Bayonne Ham. They can be used in all of the same applications, including straight up on some toasty ciabatta.

The quality of the cheese is also crucial in this recipe. I used an aged, white cheddar, but aged provolone would also pair well with the ham.

Sautéed leeks add sweetness and texture, and chives are the perfect green garnish to compliment that onion flavor. 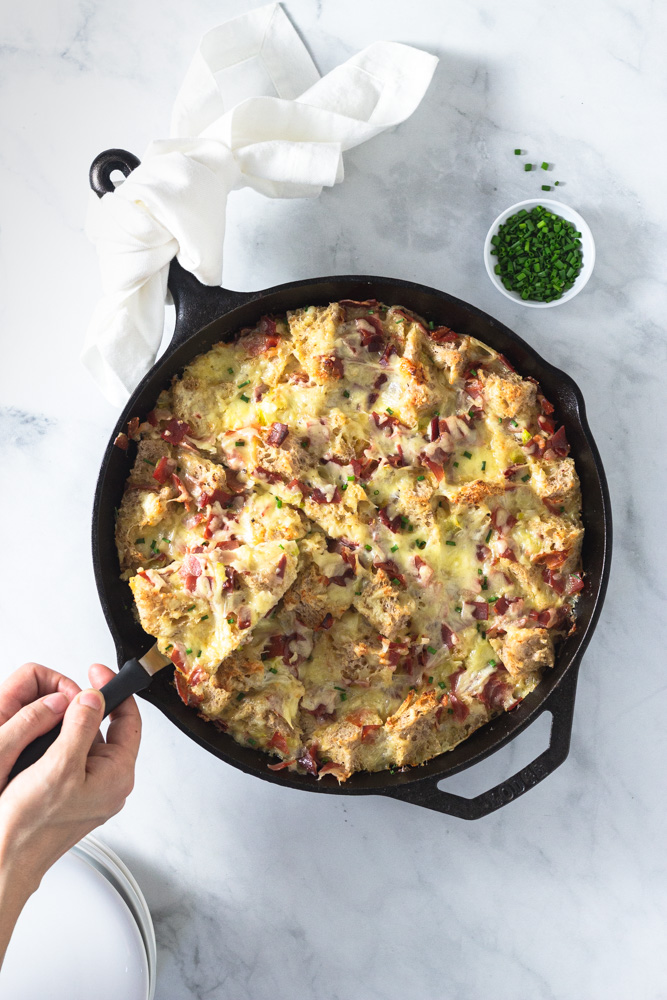 PLAN AHEAD.
If you’re planning to serve this Ham and Cheese Strata at your next brunch get together, keep in mind that most of the ingredients can be prepared ahead of time.

Check out my tips below:

Dehydrate bread. At least 1 to 2 days before you plan to bake the strata, you can remove the crust from your sourdough loaf and slice it into cubes. Simply spread out, uncovered on a sheet tray and let it do its thing. This can even be done weeks ahead, but keep in mind you need 13oz of fresh bread, which will weigh less after it’s dehydrated. Just keep to the 7 cup total to make sure your proportions are on point.
Sauté leeks. You can cook the leeks 1 to 2 days ahead of time and store them in the fridge. Sit them out at room temperature for about an hour or so before you assemble the strata, and you’re in business.
Chop ham. Feel free to chop the ham the night before. Wrap tightly with plastic wrap to prevent drying and oxidation.
Grate cheese. You can also grate the cheese the night before. Wrap tightly with plastic wrap.
Chop chives. If you slice the chives the night before, wrap in a slightly damp paper towel and then store in a ziplock bag. They’ll stay fresh and crisp until you’re ready to garnish your dish. 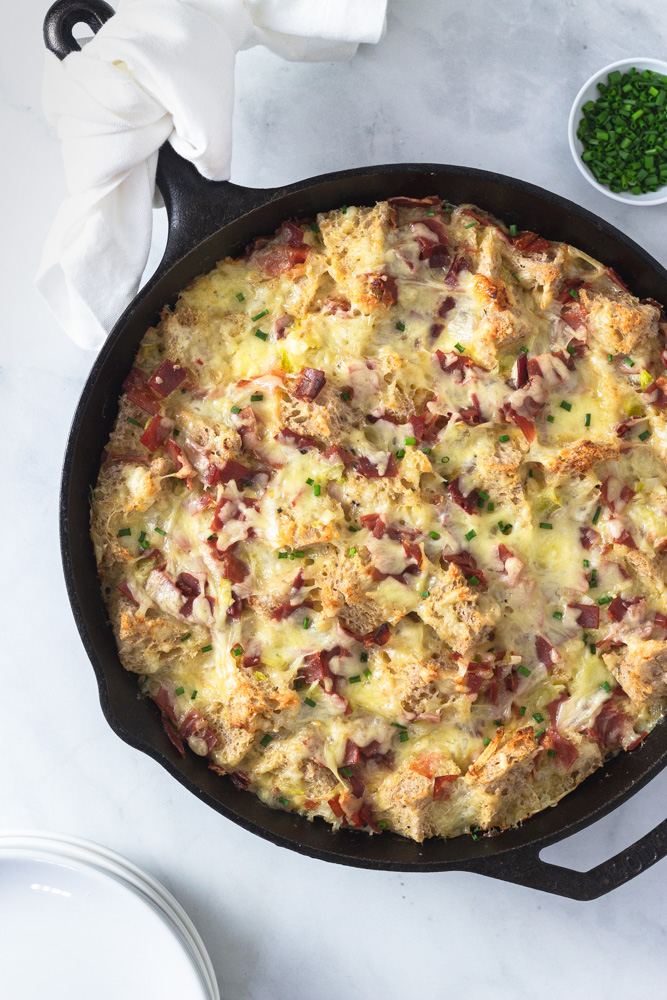 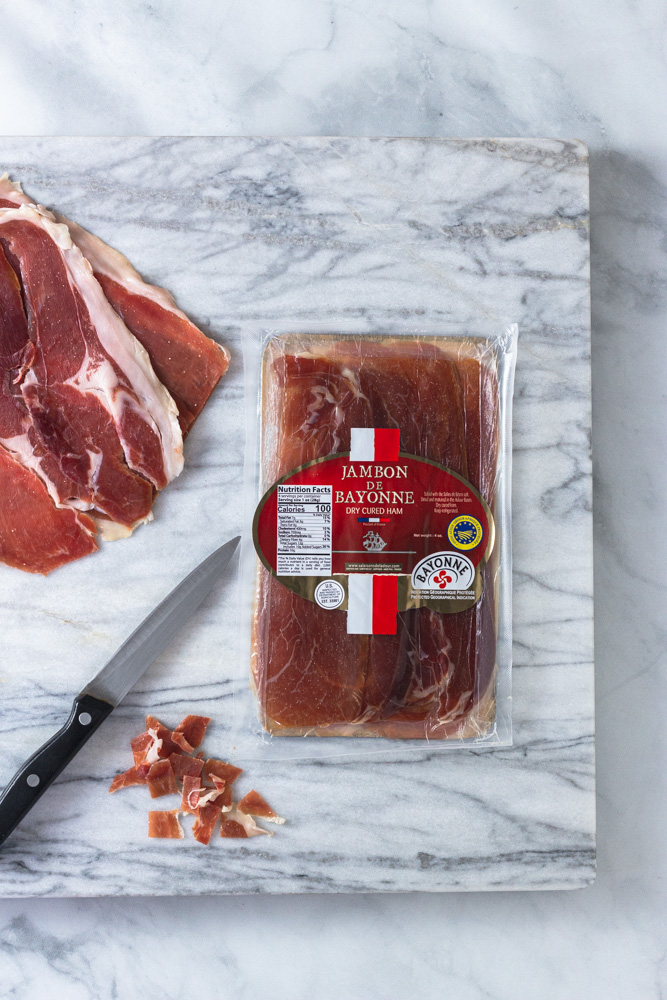