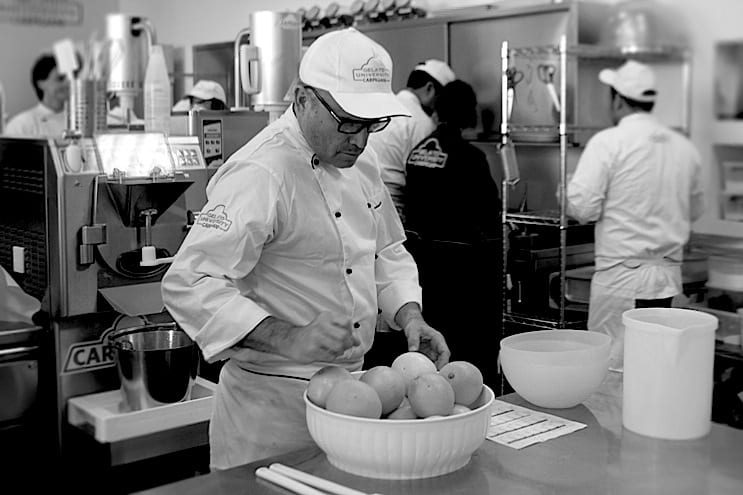 Ambra Meda with a second report from the Caprigiani Gelato University in Italy.
By Ambra Meda

“What we are going to create today is like one of those beautiful butterflies that are graceful and full of color: pleasing, harmonious, but extremely ephemeral.” 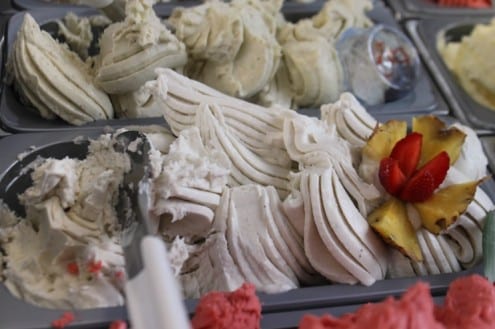 With these words Luciano Ferrari, master gelato chef of Carpigiani Gelato University, captures the attention of the 33 students who flew to Anzola Emilia from airports all over the world: from Melbourne to Nigeria, from Florida to Taiwan, up to Singapore and Bhutan. 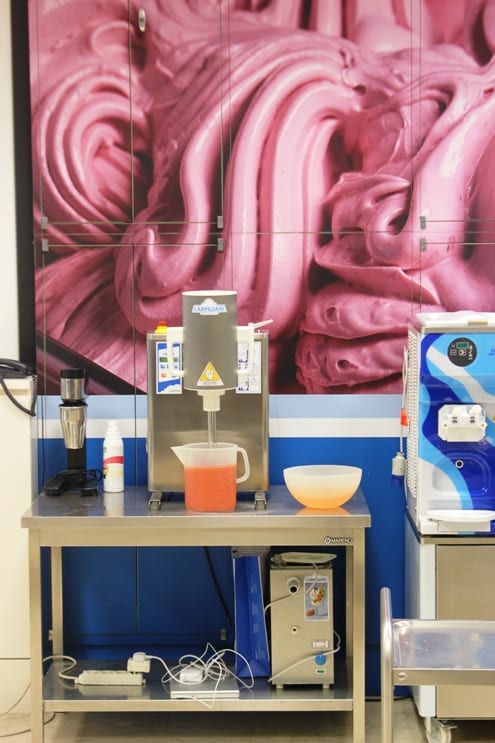 “If in its identity card, gelato looks similar to ice cream – Ferrari explains – in reality it’s way more precarious and fragile. As it gets close to the end of its life cycle, it starts to lose some of its qualities, its smoothness,  its spreadability. It is a butterfly that can live only for to two or three days.” 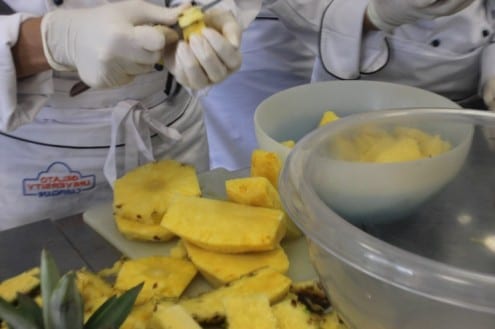 Despite gelato being one of the main symbols of the Made in Italy trademark, taking a class on the art of this cold, delicious dessert one finds out the Italians are not the only ones to be in love with it. “I’ve been dreaming about learning how to make gelato for the last six years,” Jasmine, arrived from Malaysia, says. “When I managed to carve out a month to do it, I immediately left, and now I fantasize about opening my own store in New Dheli.” Claire, who’s just turned twenty, comes from Belgium. “I was studying sociology at the university, but it was so boring that when I heard that in Italy there was a university dedicated to gelato, I left my books and exams on the side and I immediately flew out here… I just hope my dad won’t get too mad when he finds out. ” 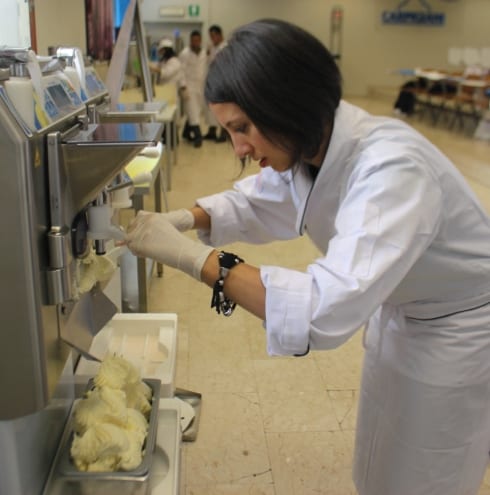 Although in 1989 it was purchased by the food equipment company Ali Group, the brand known as “the Ferrari of the world of ice cream machines” continues to bear the name of the Carpigiani brothers: Bruto, who in 1944 invented the ‘Autogelatiera‘, and Poerio, who in 1946, after his sibling’s death, founded the homonymous production company in Anzola, in the outskirts of the Medieval walls of Bologna. 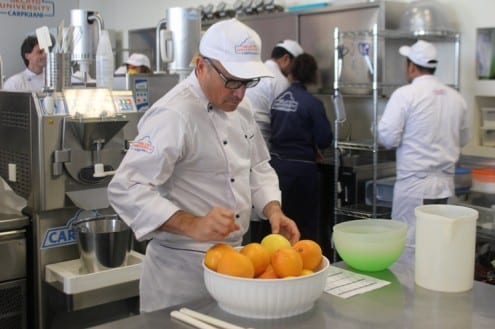 After expanding with an additional 12 branches scattered abroad, from Kuala Lumpur to Dubai, in 2003, the company opened the Gelato University, an independent division aimed to promote and spread the gelato culture around the world. Through the collaboration of master gelato chefs and university teachers, biologists and architects, the school scours the prismatic world of ice cream in its manifold facets: from the chemistry of ingredients to communication strategies, from hygienist science to marketing and the psychological effects of design. 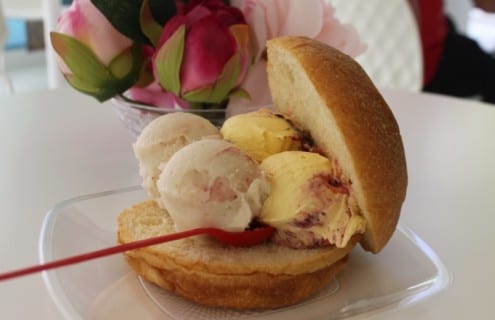 The course is not exactly a cakewalk: from the very first day, frontal lectures alternate sessions in the laboratory, where students, wearing gloves and aprons, test themselves in the preparation of the recipe they’ve been assigned: from creams, to variegated, from sorbets to gelato cakes, all regularly based on fresh and natural ingredients. At the end of each lesson, you take home a bundle of knowledge that could not be obtained elsewhere. 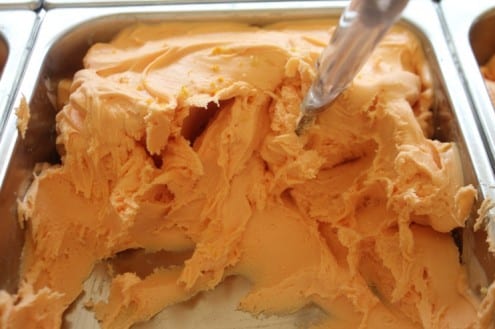 “In the academic year 2011, the entries at the CGU were 15,000” – Valentina Righi, head of Carpigiani’s public relations says -, “a growing number, that has almost doubled the 9,000 subscriptions recorded in 2009. An even more surprising figure is the percentage that expresses the total number of foreigners: 55%. 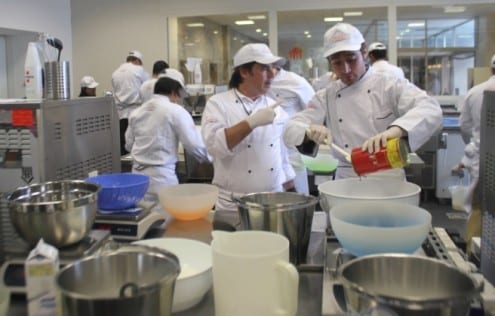 Students like Meshari, who owns a cocoa factory in Kuwait and will remain here for a month with the aim of bringing back to the Middle East the secrets of handmade gelato. Or like Sandra and Hisham, who arrived from Beirut with the plan to create a chain of soft serve ice cream in Lebanon. Diego and Luca’s journey was shorter: a train ride from Rome to Bologna; but the dream they have in mind has much broader horizons: to use gelato as a mean to start a new venture in Rio de Janeiro. In class, everybody is magnetized to the words of maestro Ferrari, who day after day rattles off the three criterion to make an excellent gelato. “The secret – he says – is to find the perfect balance of ‘taste‘, ‘structure‘ and ‘consistency‘. Not only must the gelato be able to intensively express the nature of the ingredient it represents, but also it must have a full-bodied structure. It must be hard but not fall apart, thick but spreadable, and able to smoothly alternate creaminess and crunchiness. ” If the first requirement, the ‘flavor’, seems the most obvious, in reality it’s the most difficult to obtain. The gelato the students produce their first day of school already matches the texture of those served in a real gelateria. Thanks to Carpigiani machines, which for nearly a century have dominated in the best laboratories around the world, gelato’s structure is anything but perfect. “Over the past four years – the event manager Achille Sassoli says – the winners of the main festivals and international awards about gelato have been our former students. People like James Coleridge form Vancouver, who last May earned the first place at the Florence Gelato Festival“. 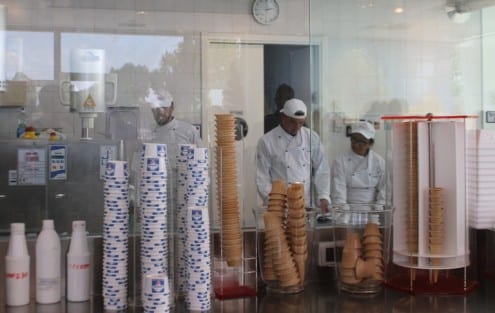 Every year, Carpigiani reinvests a large percentage of their sales in research and new technologies. This is the mission of ‘Bruto and Poerio Carpigiani Foundation‘, born last summer to safeguard the cultural heritage of gelato, keeping an eye on the future. The contest they launched, “Designing Ice Cream Cone Evolution“, will provide two scholarships of € 2,500 to the two designers who will outline a new type of cone able to replace the traditional one invented by Vittorio Marchioni in 1903. Even though the aspiring gelato makers represent the majority, to take the class one doesn’t need to have a business plan in their pocket. Only 15-20% of the students actually purchase Carpigiani machines and invest in a gelateria.

“I have no intention to open my own store – Frank from Hong Kong says -. I am a professional traveler, I am just here because of I am crazy about gelato.”‘

At CGU, apprentices sign up for different reasons: some with a detailed commercial project, others with a dream still undefined, some with the sole intention of having fun.

What brings them together is the passion for a dessert that, for over a thousand years, has been watering the mouths of people around the world. 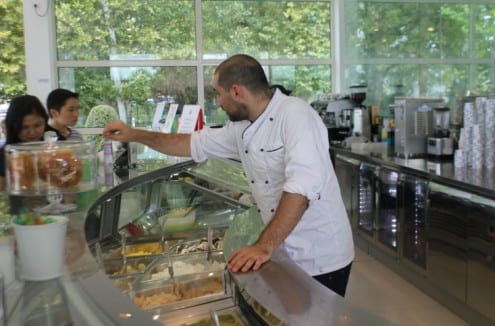