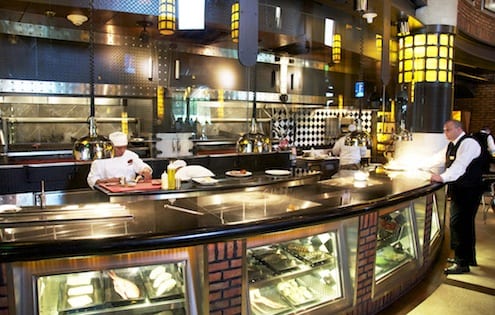 A great red brick building erected on the side of a high-rise, offers some seafood and steak that can leave you breathless in more ways than one.
By Brenda Benoit 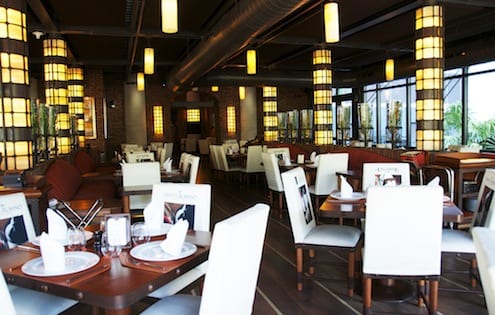 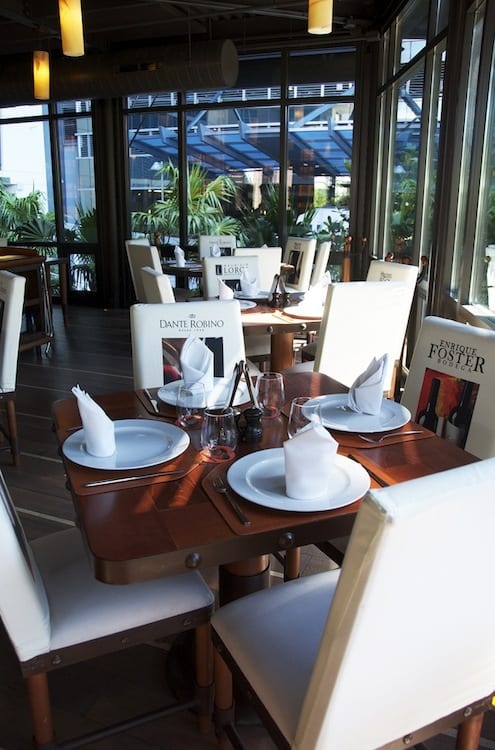 Entering the restaurant was quite daunting as it is massive: 3 floors elegantly decorated in hues of red, dark wood and white; yellow light fixtures adding a flattering tone to the overall atmosphere.

Today I was with Mister R. – one of my significant eaters – who graciously invited me to lunch, much to the regret of his wallet.

The first arrival to the table was the Grilled Octopus, an epiphany of flavors that made the heart sing with joy. The octopus was perfectly seared in olive oil, sea salt and fresh pepper. The waitress presented the dish to us and then proceeded to cut the octopus into bite-size morsels. That was a nice touch. Each mouthful was soft, silky and with a flavor that was incomparable to any other octopus that I have had recently.

Mister R. was more conservative with his appetizer and had a vegetable soup that was a cornucopia of veggies: broccoli, carrots, potatoes, cauliflower, you name it – it was in that soup.

I had a steak as a main dish, which was tender and juicy but not very attractive on the plate: a big hunk of New York Strip fit for a cavewoman and garnished sparsely. Substantial fare for sure but not an award-winning plate.

The star of the show was the Sea Bass. It was served in a smooth soy sauce with shiitake mushrooms and asparagus. The presentation was simple and modern, almost like an abstract painting. Everything on the plate tasted divine – I was allowed to taste – and I was hoping that Mister R. would have a sudden urge to use the restroom so I could devour the rest and tell him that the waitress took away the plate when he was away. No such luck for me, but the flaky and firm consistency of the fish, the bold yet subtle flavor will remain forever in my taste memory.

For the grand finale, dessert was in order. We asked for the sample plate, which came with four different desserts. Samples are usually small, a tiny glimpse into the dessert menu, but this sample came with full size desserts: House Special Flan made with the traditional Argentine recipe. Classic cheesecake, with a coulis of berries. Truffle Bittersweet chocolate cake, filled, covered and glazed with a trio of chocolates. And a massive alfajor: a sandwich cookie filled with dulce de leche, which is a creamy caramel confection made from milk and sugar. It was impossible not to take some of this home, to the delight of my children.

So the bill arrives and Mister R. is sill smiling, his stomach still laughing from the culinary delights ingested. Then, after one look, the smile disappears, replaced by an incredulous look of surprise that made his eyes look like they were ready to fly out of his head. I looked at him quizzically, he smiled again and then said, “ The company was all worth it”.

I loved the place, the service was attentive and they even indulged my unusual requests of putting the food in certain places so I could take photos. The menu is large and very varied so all tastes can be accommodated. It is on the pricey side though, so PM Buenos Aires is best reserved for special occasions.

I will be back as soon as I get my tax refund.