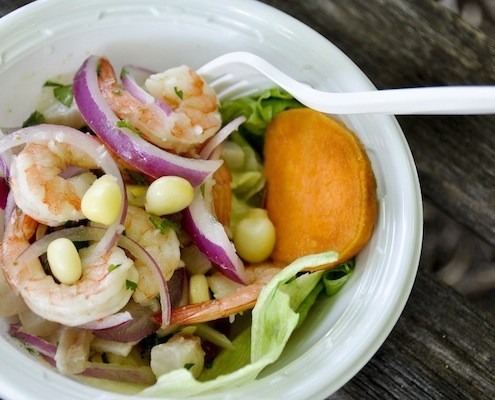 Jorge and Cheryl Olivera met while dancing in a club in Miami and discovered that both of them were enamored of the art of cooking. As the say, the rest is history, and CJ’s Peruvian Grill is the result of this happy encounter.
By Brenda Benoit

Jorge is from Peru and Cheryl is American, actually born on the Homestead Air Force Base. Jorge has been in the United States for a long time.

They went into catering because cooking is the best thing they know how to do. Jorge was in the air conditioning business for 27 years and decided to retire and to do what they both loved to do. They both like to cook.  They started with the Ramble (a garden festival at the Fairchild Botanical Gardens in Miami) about 5 years ago, at first just to make extra money but then, when Jorge retired about 1 ½ years ago, this is what they do now. Cheryl grew up with Southern food. “I can cook you up some collard greens, cornbread and grits”, She said with a smile on her face. Jorge grew up with Peruvian Food, which is one of the most varied cuisines on Earth. The real story according to Jorge: “We started cooking because we wanted to make some money and the menu at the beginning was fajitas and chicken kebabs. It was so hard to do it! I wanted for so long to do ceviches (fresh raw fish or cooked shrimp marinated in citrus juices and other spices) but there was worry about the fish staying fresh while on location. Finally I got my wish and ceviche became part of the menu and little by little the food we offered became more Peruvian and International. Cheryl is my coach, she taught me how to do the smoked pork which is a completely American and which flies like crazy when we make it. I made it into a kind of a fusion dish because of the use of the spices”.

Cheryl says that people tell them that smoked BBQ pork is not Peruvian and she tells them that the menu is a little international with a whole lot of Peruvian Dishes. Why call it CJ’s Peruvian Grill if they are also dishes from other countries? It started as CJ’s Grill then went to CJ’s Peruvian Grill when they added ceviche. The menu is basically ceviche (shrimp and corvina fish), the green spaghetti (tallarines verdes) which is a completely Peruvian dish, pollo a la brasa (grilled chicken) and the smoked BBQ pork. Sides include white rice and black beans.

“When we do the Chocolate Festival we need to do a dish that requires chocolate so we do the carapulcra, a dish that contains dried potatoes, chilis, peanuts, cumin and, in this case, chocolate.”

Opening a regular restaurant is not really a priority for Jorge & Cheryl. A lot of investment is required and it is very complicated. They like it as it is now.

How do you come up with your menu, I asked? Because this is what sells. Jorge answers. Ceviche is the most Peruvian dish you can get and people will eat it anytime. The chicken is always made with Peruvian spices: the same spices used in the rotisserie chicken from Peru. The Peruvian dishes we make are all traditional.

What is your opinion about the food scene in Miami? “We used to go out everywhere but not anymore. People in Miami have a long way to go as far as developing a taste for foods that they are not familiar with. Folks here have a tendency to not be really open-minded about food. There are so many things we would like to try but cannot. You do not see a lot of crazy and unusual food in restaurants these days. The most exciting thing going on now in Miami are the food trucks but not all of them are good. The scene is progressing but slowly, so there is hope. “

Jorge did most of the cooking at home when growing up. He grew up in a household of 6 kids. His Mom worked all day long, she was a Teacher and a Principal, and his Dad worked all day also.  They could not afford to have a Housekeeper but someone had to cook for his brothers and sisters, and that was he. Jorge did not know how to cook so his Mother, Margarita, taught him how to cook on Saturdays and Sundays, her free days. He became the cook of the house.

They also offer some very special sauces, Cilantro Chimichurri and Aji Amarillo.  Chimichurri is a green sauce actually originated in Argentina but CJ’s puts a special twist on it by using cilantro, fresh coriander leaves, instead of parsley. This stuff is addicting and I call it my green gold. Put this on anything, and it will transform the taste of even the dullest dishes. It can be used on grilled meats, as a marinade and even as a dip for bread!

The Aji Amarillo sauce (yellow pepper) is mild, savory and adds a massive dose of flavor to anything one adds it to.

I wanted to showcase this family business as I was so impressed. At first by their excellent ceviche, then by the yummy chicken and the simple straightforward way in which they handle their spicing. Each time I take a bite into any of their dishes, it is like getting an infusion of intense flavor that goes straight to my bloodstream. How do they do this? I think it is simple love for what they do.

CJ’s Peruvian Grill caters for all types of events and they do the rounds of the various Festivals in Miami. They are still working on a website.

As they very well say ” We bring the grill…” And they will bring it wherever you need it !